Something like one-half of the people in the West uncritically accept what they read and hear in the mass media. The percentage is probably higher in less developed countries and it may be higher in the West, too.

Today, I fully appreciated how much your humble correspondent – who could be called a maverick by some of you even though I consider myself as "centrist" as you can get – has been a victim of this pressure, too. At least in one particular episode.


It's a seemingly innocent example but I think that the content is very deep and important if you think about it because it's all about the competition between fading fame, mass adulation, and media hype on one side and genuine expertise and help to the people on the other side.

In the 1990s, a Czech guy called Lukáš Pollert got lots of medals in canoe slaloms, including the gold at 1992 Barcelona and silver at 1996 Atlanta Olympic Games.

He was different from the average medal winners, however. He wouldn't be too touched when he was getting the awards. In 2000, he decided to stop his athletic career but he became famous for a particular act: "without scruples", he sold his two Olympic medals for CZK 150,000 which would be about USD 5,000 at that time (more than a decade ago).

(An American athlete managed to sell a 1980 Olympic medal for USD 300,000 a few years ago. This seems incredibly high to me given the fact that tens of thousands of Olympic medals are spread all over the world. A Czech TV found an Internet auction at which you could buy the Czech Order of the White Lion for USD 1,000. Wow, that's pretty cheap for an order given to some top personalities and top foreign statesmen only. But the offer shows that at least for someone, the value of the order is lower than that.)

He wanted to buy a Corvetta but at the end, I think that all the money were paid to a charity (it went for needles for drug addicts) for him to stop annoying questions from mindless journalists. Note that the actual value of the metals in the Olympic gold medal is just USD 600 or so because it's only 1% gold; silver is the only sufficiently represented precious metal even in the gold medal.

Pollert would be painted as an immoral athlete of a sort. Fanatical sports fans and fanatical nationalists had to be offended. And he was probably stupid, too, the media would implicitly or explicitly claim. And even folks like me would be kind of automatically buying this appraisal.

But it was me who was being stupid – in a similar sense in which the majority of the mankind will always be stupid. Rudimentary research would be enough to realize that Pollert studied medicine and he was already a full-fledged doctor who just managed to be good in canoe slalom and who had won some races. That wasn't infinitely difficult (relatively to medicine) and the fact that he could win them doesn't mean that he has to be as obsessed by the races, the victories, and the awards as the folks who can't do anything else.

(I was really provoked to formulate things in this way after I heard Usain Bolt calling himself a legend. Other Olympic propositions that irritated me today were the widespread media hype saying that our male javelin thrower Vítězslav Veselý had to win gold, it was a sure thing. I knew that there was absolutely no rational reason for this kind of certainty; for example, he's never won a global competition before, he was 4th a year ago and last one in the Beijing 2008 finals. Of course, I was right. But some people love to get obsessed by shared nationalist myths of various kinds and spread them even after the bubble bursts; it felt similar to the fanatical Pakistani defenders of the inventor of the water-powered car. BTW the Czech medal tally is at 3-3-3 now, a nicely balanced score.)

After all, his lack of interest in the honors puts him close to folks like Richard Feynman. And be sure this comparison makes it positive in my eyes. ;-) BTW Feynman said that his dad brought him in this way; mine surely hasn't but I still ended with the same opinion about this issue as Feynman. Pollert would always emphasize that the Olympics were a megalomania of business primarily serving business interests. He wouldn't have gone to the Olympics at all because it imposes many kinds of bans and mandatory activities (some delegations were even prohibited to use social networks during the games!) but the number of races per year was low enough that Olympics made the list, too.

But back to Pollert's sentiments. In fact, things like medicine are more important for him and one could make a very good point that this priority is because he is vastly more intelligent, refined, and mature than the typical winners. Despite the fact that he doesn't consider sports to be a priority and he hasn't been canoeing for many years, you could say that in reality, he also fits the ancient Olympic "renaissance man" ideal much more accurately than the typical top athletes who are often as stupid as a doorknob if not more than that.

In 2003, Pollert starred as himself in Homo Pollert, a short 10-minute movie about the story with the sold medals and about the emergence of his friendship with Prague ex-mayor and Himalayan climber Dr Pavel Bém.

Recently, in Spring 2012, the Czech brewery Budweiser Budvar (sold as Czechvar in Northern America) – a leading competitor of our local famous breweries in Pilsen – turned Dr Pollert, together with the emigrant actor Mr Jan Tříska, into stars of an advertisement campaign "against compromises" called

"No" is what makes us what we are.

It is the first time I see those commercials (via YouTube) – probably because I am not spending much time by watching TV.

But they seem to be the deepest personality-based commercials I have ever seen. To say the least, they're much deeper than Fernet's commercial campaign they wanted me to participate in (but they fortunately eliminated me in the casting). Let me offer you both 30-second and 45-second clips.

But before I do so, let's emphasize that the videos' messages are extremely serious. To produce a compensation, Budweiser Budvar also created a parody web called The Euro B Beer – explaining "how our beer would look like if we were saying 'Yes'" (everything is mediocre, politically correct, and everything just sucks over there – and it's very funny). Whenever you click at something, the website tells you that the B average version sucks and they will keep on resisting PET bottles and norms imposed by self-anointed bureaucrats.

But let's start with the serious commercials. First, Dr Pollert.

Pollert says: I have nothing against sport as such. However, to practice it at the top level after the 30th birthday looked a bit infantile to me. I didn't want to be reduced to a collector of medals. That's not why I have studied. I have sold them because they had no value for me. I have completely different goals in my life.

Tříska says: To stay in a country where a tyrant is forcing his people to be actors in a farce? I prefer to give up the roof above my head and face hostile elements. I am saying "No". I am saying "farewell". Let the devil take the tyrant who serves him. I will no longer bring logs for him.

The only thing I am worried about is the commercial success of the campaign because the most numerous consumers of Budweiser Budvar are not much and they usually don't say "No", especially not if they are offered another pint. ;-)

On Saturday, our professional soldier Mr David Svoboda [=freedom] won the modern pentathlon tournament – he's quite different from the stereotypical officers in the army who are fat and unable to climb the staircase. ;-)

Finally, on Sunday afternoon, Mr Jaroslav Kulhavý won the Olympic mountain bike race. When he was picking the medal, he was respectful towards the state-of-the-art nationalist rituals: :-) 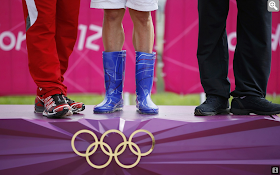 Ms Barbora Špotáková, the undisputed best female javelin winner, will hold the flag during the final ceremony. With the 4+3+3 gold+silver+bronze medals at the end, Czechia took the 19th spot between our beloved comrades in Iran (4+5+3) and North Korea (4+0+2). :-) OK, fine, I improved this segment of the table a little bit: Jamaica (4+4+4) is 18th.
Luboš Motl v 10:49 PM
Share