Update: Amer Iqbal recommended me three physicists' critical articles about this fraud, including his own. See Tribune I, Tribune II (his), Dawn.


During the weekend, I was informed by a Facebook contact of mine who lives on the Indian subcontinent that Pakistan is excited by the invention by Agha Waqar Ahmad, an engineer, who has "managed, by the grace of Allah, to produce a car that runs on water". While doing so, he was allegedly inspired by uranium enrichment scientist Qadeer Khan. See a "demonstration" of the "breakthrough" or a 40-minute TV program. 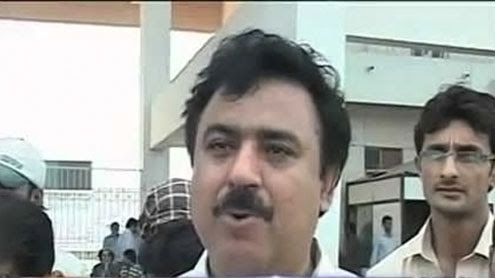 The new messiah of Pakistan. He made a Suzuki motorcycle that runs on a fuel you've been thinking about when you were in the kindergarten: water.

The nation that has gifted Abdus Salam, the co-father of the Standard Model, to the world has forgotten about its great scientist (well, he became unpopular because of some sectarian conflicts and his belonging to the "wrong" sect) as well as basic physics itself. Most people who have heard about the water-run gospel seem to be excited. First, do they have a reason?


We're told that you just pour a liter of water into his miraculous, Allah-sponsored engine and your tractor or your Suzuki motorcycle ;-) goes for miles and miles and miles. Much like in Andrea Rossi's case, the miracle is supposed to be helped by a catalyst.

To have an idea about the repercussions of the "invention", look e.g. at Pakistan Observer I and Pakistan Observer II. Of course, the excitement is much more intense in the media printed in the local language, Urdu (an implementation of Hindi). Whole mass rallies with slogan chanting to support the crackpot are being organized. Let's admit that there are also amusing parodies, rightfully harsh critics, e.g. in the Times of Pakistan, people demanding investigation and punishment for the crackpots, e.g. in The Pakistan Today, and skeptics offering money if it works, e.g. The Tribune PK. Disbelievers include a former science minister who challenged the "inventor": the disbeliever got instantly sued for "undermining the invention". ;-) The New York Times printed an OK story on this invention on Saturday. However, it seems clear to me which group is "winning the P.R. wars" in Pakistan and the answer isn't encouraging.

Just to be sure, the proposed engine violates the same law – the energy conservation law i.e. the first law of thermodynamics – as other perpetual motion machines in the most primitive category (some of them are shown in the video via Eytan S. [thanks] above; warning for non-physicists: the video involves some tricks, not true physics miracles). In particular, a catalyst isn't a compound that allows you to do similar miracles. A catalyst – and everything else in the Universe except for processes in cosmology – respects the energy conservation law. A true catalyst would only allow you to speed up a reaction by "lending" some energy to the chemical process. A potential barrier may be easier to be surpassed but at the end, both the catalyst and the energy that was invested has to get out.

If you talk about the splitting of water into hydrogen and oxygen, then this is the reaction:\[

\] The unit of energy is \(1\eV=1.602\times 10^{-19}\,{\rm J}\). I would like to hope that the indicated energy is right (for water solutions near pH 7.0: the energy counting would be different for different pH levels or in the vacuum) and shouldn't be multiplied by two. Please correct me if something is wrong.

At any rate, two water molecules may be rearranged into separated hydrogen and oxygen gas molecules (those elements like to form diatomic molecules) but if you want to "split" water into the individual elements, you need to invest some energy, \(1.23\eV\). You may do so e.g. if you apply voltage of \(1.23\,{\rm V}\) which is what gives each electron (or equally charged particle) the energy of \(1.23\eV\) when it moves in between the electrodes.

On the contrary, if you have hydrogen and oxygen, it is "good for you" because you may create not only water but also some energy per each water molecule. At any rate, each stationary configuration of molecules or any other objects has a certain energy that is entirely determined by the objects and their locations. If you want to rearrange the atoms into configurations with a higher energy – e.g. separate oxygen and hydrogen in our example – you must add some energy. If you want to go in the opposite direction, you may "earn" the same energy. But energy is never lost and it is never created out of nothing.

It is remarkable but ministers (who discuss it during the sessions of the government; the government promised the support for the "water as fuel" project), media persons, and even many people who are considered good Pakistani scientists have a problem with these basic propositions, with the energy conservation law that a bright enough schoolkid may start to understand when she is 10 years old or so. The IQ gap between the inability to understand the energy conservation law and the ability to become one of the world's first three people (well, two people, sorry, Shelly) who are able to write down the final equations of the electroweak theory of particle physics is just stunning. But this is exactly the gap between the top Pakistani scientists in the late 1960s and the "top" Pakistani scientists in the early 2010s. And knowing that a similar plain stupid nation possesses nuclear weapons is just scary.

The semi-religious (and partly religiously motivated) zeal of Waqar's fans is just amazing – and although we are talking about an underdeveloped nation, some of the observed features may be found in the West, too. Take e.g. the discussion under the Pakistan Observer II article. The first participant gives a simple and comprehensible explanation why those things can't work:


Electrolysis guy: The energy consumed in electrolysis of water to form hydrogen and oxygen would be greater than the energy produced by the combustion of formed hydrogen. What is the point of running the engine by hydrogen when same amount of petrol or diesel is being consumed to do electrolysis of water? As a nation we are a bunch of idiots, getting overly excited by a failed idea. This also shamelessly exposes the level of our scientific understanding, and our dumb 'scientists' are no exception.


Exactly. The degree of excitement about this self-evident piece of rubbish does show the lower level of education of the Pakistani nation – and even the Pakistani establishment. To obtain water-related fuels, i.e. hydrogen and oxygen, you have to do electrolysis but the energy you insert into it is the same one you get out. Well, you get out less than that due to losses etc.

You could think that the comment above is uncontroversial among people from civilized places – colleges or the industrial center in Lahore. However, this is what two people from a medical college and Lahore respectively replied:


Medical college: we r not idiots I GUESS YOU ARE.. who cant understand THERE's difference IN PETROL and water.. PETROL is very very very expensive to get ON the other hand WATER is present EVERYWHERE.. we have SEA here

IF YOU CANT admire for GOD SAKE dont say BAD abt anything.. SHAME ON YOU..
Lahore: Yea Pakistan definitely need pessimistic people like you... who would just sit on their asses and criticize others... At least someone made an effort! learn to appreciate it.


Holy cow. And you find tons of similar comments about the people's pride in the "great invention", about the coming process of lowering carbon dioxide emissions (be sure that this dominant Western-produced rubbish just can't be absent when a religiously tainted crackpottery related to energy is being discussed), and lots of other things.

Note that the stupid folks – who may also be identified by their faulty capitalization in almost all but not all cases – totally ignore what the electrolysis guy tried to teach them. They are not interested in it. Much like the Shmoit-brainwashed crackpots, they are not interested in science, scientific answers, possibilities allowed by the laws of physics, constraints imposed by the laws of physics, or scientific explanations in general. Instead, they are obsessed with constantly parroting predetermined dogmas composed of entirely worthless crap but it must also be crap that is apparently very satisfactory for their taste sensors. The medical guy incorrectly conjectures that they are not idiots – well, they definitely are. Claiming to be able to distinguish petrol from water wouldn't be sufficient for not being an idiot. However, the medical guy is clearly incapable even of this modest achievement. More importantly, he fails to understand that water's lower price relatively to gasoline isn't a sufficient condition for its hypothesized ability to become a useful fuel. ;-)

Both the medical guy and the Lahore guy offer us some perspective into the mental processes inside the skulls of similar bigots. The people are expected to "admire", at least for "God's sake", and if they don't admire the crackpot engineer – or anyone who screams "Allah", for that matter – they must absorb "shame on them".

The Lahore guy also shows that what is intolerable is "pessimism". Saying that some ambitious physics claims painting a rosy future are scientific nonsense classifies as "pessimism" so the electrolysis guy is automatically a heretic.

If you read the reactions of other fans of the crackpot engineer, you will also notice that they love if the laws of physics are spitted upon, especially by someone who loves to say that Allah is greater than the laws. Now, it's great to question the current idea about the laws of physics and even the ideas about physics that haven't changed since the 18th century. However, in science, you must also allow other things to be questioned – such as the assumption that an "engineer" who screams about Allah's greatness actually has something useful and valid to be offered to his nation or the world.

If you start to be much more excited about the questioning of the insights accumulated by science than about your religious belief in a rosy future and/or in a miracle that was just claimed to have taken place, and even if you just decide to selectively listen to the "news" and "arguments" with a particular sign only (e.g. only to the optimistic news about the future sources of energy), then you're on your speedy way away from the scientific attitudes, away from a sustainable modern civilization based on science and technology.

Pakistan may be led by certain people who are partly viewed as allies of the U.S. and the West in general but I think it is unreasonable to assume that this is the permanent state of affairs. There are lots of crazy people, whether their craziness boils down to totally uneducated opinions about physics or pure religion or their bizarre combinations, and they are likely to ultimately regain the control of their state. And it won't be pretty so we should better be ready for that event.

At the end, of course, Pakistan itself isn't my main concern. I think that this story provides the West with a mirror in which we may see the caricature of our own crazy behavior. The uncritical reception of sensationalist claims by people with the ambitions of the Messiahs may look like a symptom of an underdeveloped society; but it may be a disease that Pakistan has de facto imported from the West, too.
Luboš Motl v 9:04 AM
Share