You may still vote but analogously to the Lewandowsky poll, I decided that a sufficient number of votes have been submitted and we may reveal the final results: 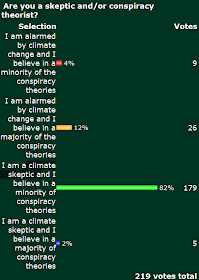 You get the point, don't you?

Just to be sure, I am not saying that the results of this "poll" should be taken seriously. And I hope you realize what's the main reason they shouldn't. However, I surely do claim that the "poll" by Lewandowsky et al. was exactly as "serious" as this one.


Off-topic, breaking news: TRF is getting hundreds of hits from harvard.edu to this 2010 TRF article on the elixir of youth, well, a fraudulent Harvard stem cell research claiming to have found one. Ms Shane Mayack was finally found guilty of misconduct today: Boston.com, Nature News


Where can you find out whether climate skeptics are conspiracy theorists?
A poll is included in this blog entry 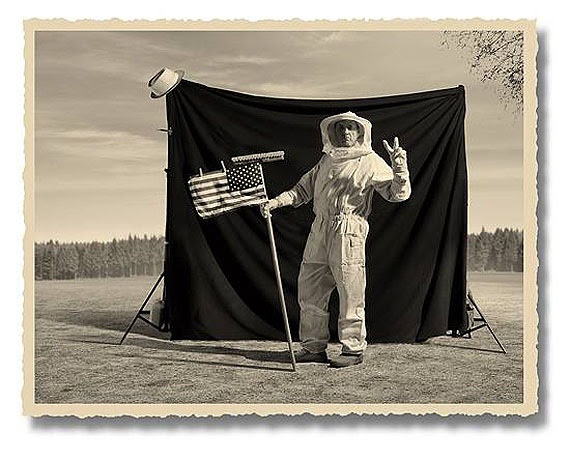 A blog at the Guardian and many other sources have promoted a "research paper" by an Australian professorial fellow (whatever it means) called Stephan Lewandowsky (plus co-authors, Dr Cignac and Dr Oberauer) and named

If it's not a strong enough cup of tea for you yet, you must look at an "additional detail" that was pointed to me in an e-mail from Joanne Nova, see also her blog:

The question is: Where did Mr Lewandowsky et al. find the conspiracy believers that were so important for them to establish the correlation with climate skepticism? The shocking answer is that while those 1,100 participants were visitors of blogs, none of the skeptical blogs you know – Anthony Watts, Jeff Id, Joanne Nova, your humble correspondent, Tom Nelson, CarbonSense, GWPF, and others – have participated in the "scientific survey".

Instead, the blogs exploited in this "scientific survey" were hardcore lunatic alarmist blogs such as Deltoid, Grant Tamino Foster, Scott Mandia, and 3-5 others. To find out whether climate skeptics are paranoid, Mr Lewandowsky asked the visitors of the alarmist blogs whether they are paranoid! ;-)

I mean: Why would anyone even pay any attention to such "scientific polls" which are clearly not scientific? To show what I mean, let me include a poll here, too. You are kindly asked to decide whether you are a climate skeptic or not; and count how many "conspiracy theories" above you believe. And you should participate in a poll.

The poll could measure individual correlation coefficients between individual conspiracy theories and individual tenets of the global warming doctrine as well but my point is that even the overall correlation coefficient is untrustworthy so you will only be asked whether you believe in a majority of the 5 conspiracy theories above or not. Consequently, you must include yourself into one of the four groups. Here is the poll:


If you need the URL for this poll only, try this one.

Just like in the original experiment, I may assure you that police won't investigate you whether your answers are accurate. BTW if TRF were a pure climate (skeptical) blog, I would know what the results would approximately look like. But because there are clearly non-paranoid alarmist visitors to this blog, I am not so sure! ;-)

BTW I realize that there are people in all the four categories. I also think that the belief in a staged moonlanding is a much better criterion of insanity than the climate panir or climate skepticism. Because the folks who matter are those who don't believe that moonlanding is staged, it is pure demagogy to link non-paranoid climate skeptics to the paranoid climate skeptics, much like it would be pure demagogy to link non-paranoid alarmists to the paranoid ones.

Willie Soon has brought my attention to a 2009 letter to the editor that he and five co-authors sent as a reply to claims that climate skepticism is analogous to the belief that the moonlanding was staged. They make the case that there's no consensus about the dangerous man-made climate change and mention this beautiful "detail":


One of us, Dr. Harrison Schmitt, actually stood on the moon, drilled holes, collected moon rocks and has since returned to Earth. Man’s landing on the moon is real.


Now, the only way for the climate alarmists to question the credentials of Dr Schmitt et al. to discuss whether climate skepticism is on par with the moonlanding conspiracy theories is to say: But Mr Schmitt, you're a denier so your trip to the Moon was just a video trick orchestrated and paid by the Big Oil industry. ;-) We only trust real NASA experts such as Mr James Hansen who are really living on the Moon.