Several events related to Albert Einstein's life occurred in recent days and months. If you consider yourself a sort of Einstein fan, you may let me mention some of them.

Second, Caltech and Princeton University Presses teamed up and released the 13th volume of Einstein papers. They cover January 1922-March 1923 and you may already buy the book for $125 at the PUP website: it has over 900 pages. Einstein is travelling a lot, is ahead of time and already (or still) speaks Hebrew in British Palestine ;-), and doesn't even mention his Nobel prize. Wired about the new book.


Third, there was a conference of Einstein fans among relativists three months ago in Prague. It was a centennial one because Einstein was a full professor (for the first time!) at the local Charles University (German section: then named Karl-Ferdinands Universität) between 1911 and 1912. He left after the third semester, in July 1912, almost exactly 100 years ago.

You may want to read some of the dozens of presentations. I will recommend you the presentation by Prof Jiří Bičák, the main organizer and my undergraduate ex-instructor of general relativity:


Einstein’s Days and Works in Prague: Relativity Then and Now


It's a fun PDF file that shows a lot about the social context as well as the state of his thoughts about general relativity – which wasn't complete yet – at that time.

In April 1911, he wrote this to his friend Grossmann:


I have a magnificent institute here in which I work very comfortably. Otherwise it is less homey (Czech language, bedbugs, awful water, etc.). By the way, Czechs are more harmless than one thinks.


As big a compliment to the Czechs as you can get. ;-) Two weeks later, he added this in a letter to M. Besso:


The city of Prague is very ﬁne, so beautiful that it is worth a long journey for
itself.


Bičák adds lots of fun stuff about the local reaction to Einstein's presence. But there's quite some physics he did in Prague – essential developments that had to occur for the general theory of relativity to be born. Einstein himself summarized the importance of his year in Prague rather concisely, in a foreword to the Czech translation of a 1923 book explaining relativity:


I am pleased that this small book is finally released in the mother tongue of the country in which I finally found enough concentration that was needed for the basic idea of general relativity, one that I have been aware of since 1908, to be gradually dressed up into less fuzzy clothes. In the silent rooms of the Institute for Theoretical Physics of Prague's German University in Viničná Street, I discovered that the equivalence principle implied the bending of light near the Sun and that it was large enough to be observable, even though I was unaware that 100 years earlier, a similar corollary was extracted from Newton's mechanics and his theory of light emission. In Prague, I also discovered the consequence of the principles that says that spectral lines are shifted towards the red end, a consequence that hasn't been perfectly experimentally validated yet.


Well, be sure that as of today, it's been validated for half a century – in an experiment that took place in another building where I have worked for 6 years (and yes, the Wikipedia picture of the building is mine, too).

The Czech translation I used to translate it to modern Lumo English was probably obtained by translating a German original and you will surely forgive me some improvements.

Note that it was a pretty powerful combination of insights: gravitational red shift as well as the light bending (observed during the 1919 solar eclipse) were discovered in Prague. It was years before Einstein had the final form of the equations of general relativity, Einstein's equations.

Today, people – including people who consider themselves knowledgeable about physics – often fail to understand that many insights may be physically deduced even if one doesn't possess the final exact form of the equations. Principles imply a lot. They may be logically processed to derive new insights. At the beginning of the 20th century, people like Einstein could do such things very well. Many people today would almost try to outlaw such reasoning – principled reasoning that used to define good theoretical physicists. They would love to outlaw principles themselves. They would love to claim it is illegal to believe any principles, it is illegal to be convinced that any principles are true. 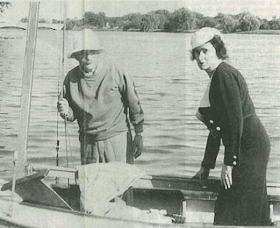 Albert Einstein and Johanna Fantová, his Czech yachting buddy while in the U.S.

Just imagine that you shoot a bullet whose speed is the speed of light – Newton's light corpuscle – around the Sun so that the bullet barely touches the Sun and you calculate how much the bullet's trajectory is bent towards the Sun due to the star's gravitational attraction. You integrate the appropriate component of the acceleration to find out the change of the velocity, take the ratio of this perpendicular velocity to the original component of the velocity, and that's the angle.

General relativity just happens to give you a result that is almost the same: well, it's exactly 2 times larger.

It's perhaps more insightful to discuss the derivation of the gravitational red shift where one may reasonably trust even the numerical coefficient and it is indeed right. His argument went like this (optimization by your humble correspondent).

Consider a carousel rotating by the angular speed \(\omega\). Objects standing at the carousel at distance \(R\) from the axis of rotation will feel the centrifugal acceleration \(R\omega^2\). They will also move by the speed \(v=R\omega\). Special relativity guarantees that their clocks will tick slower (time dilation), by the factor of \[

\] Observers in the rotating frame of the carousel will interpret the centrifugal force as a gravitational field. And because from the rotating frame's viewpoint, the velocity of all objects standing on the carousel is zero so the special relativistic time dilation doesn't exist in this frame, the slowing down of time must be a consequence of the gravitational field.

\] So the gravitational potential \(\Phi\) is really related to the "rate of time" which we would call \(\sqrt{g_{00}}\) these days. Einstein could realize this fact several years before he could write down the equations of the general theory of relativity.

Because special relativity guaranteed that motion unexpectedly influences the flow of time and because by 1911-12, he fully appreciated that the accelerated motion and the inertial forces it causes may be physically indistinguishable from a gravitational field, he could see that the gravitational field influences the flow of time, too. And he could even extract the right formula in the Newtonian limit.

Of course, it's safer to work with the full theory. However, such "semi-heuristic" derivations are valid very frequently and you shouldn't just dismiss them, especially if the author of such arguments seems to know what he or she is doing.

P.S. Joseph sent me a link to a rather fascinating 1912 or so notebook of Einstein with handwritten puzzles and trivial tensor calculus that Einstein was just learning or co-discovering.
Luboš Motl v 4:54 PM
Share