TBBT: All American readers should notice that the first episode of the 6th season of The Big Bang Theory was aired by CBS yesterday. Howard was in space.
Holes: Joe Polchinski wrote a Cosmic Variance guest blog on black hole firewalls.
SUSY: Dave Goldberg at IO9 asks what's so super about it.

by Jan de Boer and Masaki Shigemori of Amsterdam. It is a kind of an excursion into the inner workings of string theory that I find extremely important, playful, and I think that similar papers are heavily undercited, underread, and understudied.

The Dutch and Japanese string theorists investigate a certain unusual type of objects whose existence depends on special properties of string theory and which don't exist in regular quantum field theories etc. That's why they are called "exotic". However, as the authors argue, within string theory, these objects are common, unavoidable (they arise, for example, during "polarization" of ordinary branes), and therefore omnipresent.


What are those objects?

They are generalized codimension-2 branes (codimension-2 means that there exist 2 dimensions that don't stretch along these branes world volume) such that the monodromy around them induces a non-trivial transformation on the string theory configuration space, namely a U-duality (T-duality is already bizarre enough).

First, let me start with anyons which also show us "special properties" of the codimension-2 case.

In 3+1 dimensions, we know that particles may obey Fermi-Dirac statistics or Bose-Einstein statistics. That's true in higher dimensions, too. If you exchange two particles' locations, the wave function either changes sign or it doesn't change at all. These are the only two choices because if you repeat the transposition twice, you literally get to the original state, so not even the phase can change. However, in 2+1 dimensions, there are new solutions because if you rotate a particle around another particle twice, the permutation can't be "unwound" to prove that it's the identity. Consequently, a more general phase – and even a general unitary transformation – may transform the wave function. That's what the anyons – particles with exotic statistics allowed in 2 spatial dimensions – are all about. Note that they are point-like particles localized in 2 spatial dimensions: they are codimension-2 objects.

Another example of codimension-2 objects are 7-branes in F-theory.

D6-branes and lower-dimensional D-branes are localized in a sufficient number of dimensions so they look like tiny enough perturbations of the spacetime that surrounds them. But as you go to higher-dimensional branes, there is just not enough room around them, and this has consequences – despite the fact that all the D\(p\)-branes seem to be T-dual to each other.

D9-branes are spacetime-filling (codimension-0) and the total charge they carry should better cancel: this is really the generalized Maxwell equation for the 10-form potential or the 11-form field strength. Because the 11-form vanishes identically, as you may have screamed when you were reading the previous sentence, the generalized Maxwell's equations extending \(\partial_\mu F^{\mu\nu}=j^\nu\) really say just \(j^\nu=0\) except that the current should have 10 indices. That's why you may only study D9-brane-anti-D9-brane systems with tachyons (which make the backgrounds unstable or interesting) or you may consider vacua with orientifolds that also contribute to the current and they lead you to type I string theory which has to have 16 D9-branes and their mirror images "behind" the orientifold plane, thus generating the \(SO(32)\) gauge group.

D8-branes are codimension-1 objects. They make the dilaton of type IIA string theory run very quickly unless the total number of them is again zero – or whatever it should. At the end of the world in type IA string theory, the T-dual of type I, you may combine the D8-branes with the orientifold plane and this gives you degrees of freedom that may become the \(E_8\) gauge supermultiplet in the M-theory limit.

D7-branes are the first example in which the branes leave some breathing space but it is very limited. A funny thing is that loops around the D7-branes can't be unwound; this has similar geometric reasons as the anyons. Consequently, you may objectively answer the question "how many laps around the D7-branes have you walked", something that would be impossible for lower-dimensional branes. Consequently, each "orbital period" around such D7-branes may induce a transformation on the other fields as long as this transformation is a gauge symmetry.

In particular, D7-branes induce a transformation on the dilaton-axion complexified field \(\tau\). As you should know, there is a whole \(SL(2,\ZZ)\) symmetry – S-duality group of type IIB string theory – that acts on this field \(\tau\) as\[

\] If you look at the simplest case of a 7-brane, the D7-brane, you will find out that it only changes the axion \(\theta\) by \(2\pi\) – because it measures some kind of electromagnetic flux around the brane – which means that the monodromy is \(\tau\to\tau+1\). In other words, the monodromy matrix is\[

However, D7-branes aren't the only possible 7-branes in F-theory or type IIB string theory. Pretty much any monodromy may be induced if you make a round trip around the origin where the 7-branes are located. In this way, you may get a rich spectrum of 7-branes, i.e. codimension-2 singularities in F-theory, and they carry various gauge groups (including exceptional ones) and may support matter in unexpected representations when they intersect, and so on. The possible "singular fibers" which is pretty much the same thing as the 7-branes are classified by the Kodaira classification and all these things are essential for the model building of realistic string models of reality via F-theory. It's a field that's been investigated since the mid 1990s.

So the possible monodromies around the 7-branes are elements of \(SL(2,\ZZ)\) which is a non-Abelian group. That makes the 7-branes more general than lower-dimensional branes because the monodromy is what measures the total charge; recall that \(b=n\) for the stack of D7-branes. So the charge of a 7-brane is a non-Abelian object. You can't just add the 7-brane charges as if they were commuting objects.

That's interesting but there's still something "ordinary" about 7-branes in F-theory: the \(SL(2,\ZZ)\) transformations – which appear as monodromies – may be geometrically visualized. After all, that's what F-theory is all about. You imagine that the 10-dimensional type IIB string theory is really a 12-dimensional theory compactified on a 2-dimensional torus. The two cycles of the torus form a basis of the first homology group. However, the basis isn't unique. You may reshuffle the two basis vectors by an \(SL(2,\ZZ)\) transformation – and it's the same transformation that is interpreted as the S-duality group of type IIB string theory.

With the extra two dimensions, the whole spacetime looks like a purely geometric manifold – although a 12-dimensional one – and F-theory is indeed mostly a research of 12-dimensional manifolds that admit an elliptic fibration (in which you may pick two coordinates that always look like a torus attached to a point in the remaining dimensions). For example, realistic F-theory vacua with 3+1 large dimensions may be investigated by looking at possible 8-dimensional manifolds (of hidden dimensions) that are eliptically fibered.

And when the monodromies around the codimension-2 objects are general U-duality transformations, one obtains the exotic branes that this new paper (and some previous papers by these two authors and several other authors) is focusing on. They list lots of examples – within a set, they really classify all the possibilities – and they describe how these exotic branes inevitably appear when you polarize "ordinary" branes; when you study the U-duality multiplets for a sufficiently high number of compactified dimension.

I must emphasize what the U-duality monodromies mean in plain English because it's really exciting. 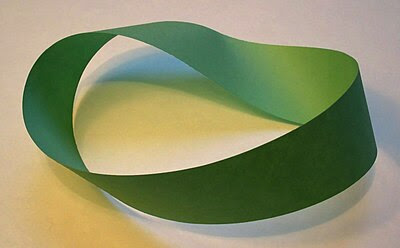 Everyone knows what a Möbius strip is. When a letter "R" walks around the strip, it returns to the original place as a "Я" (it's the letter "ya" in the Cyrillic alphabet), i.e. "R" written on the opposite side of the strip. So the monodromy – a trip around the strip – induced a mirror transformation. If the Universe had a similar twist, you could go around and return as a human (or antihuman) with a heart on the right side. It can't really occur in our Universe because the left-right parity symmetry (P) isn't even a symmetry (and CP isn't a symmetry either) and you can't connect the Universe to a transformation of itself if the transformation isn't a symmetry of the Universe.

However, string theory allows you to construct more novel spacetimes. If you were going around the strip in the backgrounds discussed by these two authors, you could see that a string with a momentum along hidden dimensions (the counterpart of "R") would get morphed into a wound string (the counterpart of "Я"). Of course, the compact circle's radius has to be an aperiodic function of the angle: it must change from \(R\) to \(\alpha'/R\) as you go around the circle, too (for the "final wound string" to have the same mass as the "initial momentum mode string"). And even more complicated non-geometric (and therefore "non-local", when it comes to locations in the compact dimensions) transformations could be possible.

Moreover, these authors claim that these objects are generic, unavoidable, and get produced by many mundane processes. In a previous paper, they discussed "U-folds" which attempt to be completely non-geometric backgrounds obtained by a decompactification of the exotic branes.

A final section is also dedicated to a fascinating discussion of exotic branes and black holes. The black hole microstates were conjectured by Samir Mathur to be described by particular "classical solutions with string-like hair". However, this description of the microstates as "fuzzballs" was only written down explicitly in some simple situations.

More generic black holes, if they may be included into the fuzzball paradigm at all, probably require a more general description of the microstates than just some "ordinary hairy solutions to the equations of SUGRA". And it's been proposed – and defended by some evidence – that the exotic branes could be a very important fraction of the black hole "hair" in the fuzzball description of more generic black holes. So if you make a round trip around pretty much any curve at the event horizon, it induces some insanely non-geometric, U-duality-like transformation. Search for "superstrata" in the new paper to learn something about this exciting paradigm. Some relevant papers about those issues can already be found in the literature.

What de Boer and Shigemori are doing may lead us to a rather new, more accurate perspective on "what string/M-theory looks like in the most generic situations", offer new tools to study some black hole puzzles, and maybe even bring us closer to the most universal possible definition of string/M-theory. That's why I am so annoyed by the small number of people who are working on similar essential questions.