Witten is such a big guy in physics that I will probably not attempt to write a single article attempting to cover all his important contributions to physics, something I did and I plan with other inaugural Milner Prize winners. Instead, we may talk about specific new papers.

I have already mentioned Edward Witten's work on technical issues of RNS Feynman diagrams but because the full trilogy is now out, it may be appropriate to summarize the links and add a few comments.

There are three papers


Short (review of the long one),
medium (background on manifolds),
long (the bulk).


This ordering is chronological, too. After we learned that the first two papers had 42 and 118 pages, respectively, we could guess what the length of the final paper would be. The answer is that the digit counting hundreds is linearly increasing, the digit counting tens is alternating between 1 and 2, and the last digit is describing coordinates of the point (2,8,5). I guess that no one had the right answer. ;-)


Now, what is Witten solving and what is new about these papers?

He is clarifying some technical issues of the procedure to calculate the scattering amplitudes in superstring theory using the perturbative method – to any order. He focuses on the Ramond-Neveu-Schwarz formalism with a manifest world sheet supersymmetry (but not manifest spacetime supersymmetry).

Because the world sheet has a supersymmetry, and the number of supercharges is small enough, it's guaranteed that one should simplify her life if she talks in terms of superspaces all the time. Surprisingly, it hasn't been the case for the moduli space of Riemann surfaces. People would always reduce the discussion to ordinary moduli spaces with bosonic coordinates only. But we're dealing with a supersymmetric theory on the world sheet and its solutions or backgrounds are naturally supermanifolds, too.

Witten does his analysis in terms of the supermoduli spaces of super Riemann surfaces. And he feels good about it. 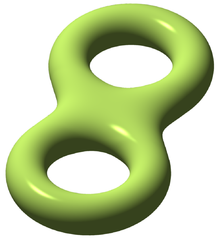 Using this method, he proves the gauge invariance of the amplitudes – i.e. the decoupling of the BRST-exact scattering states – as well as the right spacetime supersymmetry of the amplitudes whenever it is expected and the right infrared behavior. To do the latter, the infrared limits of the Riemann surfaces must be studied carefully. You may want to know that the word "infrared" appears 79 times in the long paper.

On the other hand, the word "ultraviolet" only appears 8 times and this underrepresentation has a good reason. The integrals representing the stringy scattering amplitudes don't have any ultraviolet regions at all! So there is not even potential for ultraviolet divergences. This has been known for a long time. As Witten mentions, the most mathematically explicit or rigorous demonstration of this fact is the Deligne-Mumford compactification of the moduli spaces (or super moduli space) which shows that all "extreme limits" of the Riemann surfaces are infrared limits. There are no ultraviolet "extreme limits" and no other limits, for that matter. In some cases, you could think that there is an ultraviolet limit but you will find out that it's been already counted as an infrared one.

So the absence of ultraviolet divergences is a trivial matter, even at the rigorous level adopted by Witten. When you want to analyze potential divergences in string theory, it's always and demonstrably enough to focus on infrared divergences.

Witten demonstrates that to all orders in the string coupling, the massless modes have a nicely behaving, supersymmetric, gauge-invariant S-matrix that reproduces all the required long-distance effects from the effective field theory. Do you remember all the discussions whether there exist amplitudes at all or whether string theory has any formulae for them? Witten surely closes this Smolinisque babbling even at the most rigorous level.

What remains somewhat open at this level of standards is a proper accounting for the external massive states whose masses are corrected by the stringy loops. Of course, it's pretty much known how to calculate these things but the methods haven't been converted to Witten's super moduli formalism so he doesn't have exact super moduli formulae for the mass corrections of the massive states.

Also, and it is arguably related to the previous paragraph, I say, the rigorous proof of unitarity of the resulting S-matrix hasn't been given in this formalism. While it's clear that unitarity boils down to splitting of Riemann surfaces into pairs by tubes in which pairs of vertex operators are inserted, the full treatment with all the glory and up to all orders hasn't been written down, especially because the vertex operators would have to include those for the massive states whose masses get corrected. Witten admits that the most economic available way to demonstrate unitarity is to show the equivalence between the RNS covariant mechanism and the light-cone gauge Hamiltonian formalism (my favorite formalism, at least in the past, in which I learned to calculate in string theory for the first time in the early 1990s). With a Hermitian Hamiltonian, the unitarity is pretty much manifest.

Witten's work is impressive but just like with many things, I can't avoid thinking that it's right to classify it as maths. String theory's engine to calculate the amplitudes is in principle very simple and straightforward and you may efficiently learn it. If one writes 400 pages about some technicalities, it just doesn't match my idea about the underlying simplicity and naturalness of the rules. Of course, I may only say such a thing because I adopt certain semi-heuristic arguments that are OK for physicists. Mathematicians may expand these arguments to hundreds of pages of rigorous maths. In most cases, they confirm what the physicists have known all the time. In exceptional cases, they find out that the answer is different.

However, the reasons why I am sometimes dissatisfied by the length of Witten's papers goes beyond the rigor. They seem to contain pretty much all the intermediate steps etc. so the "concentration of action" (in the Hollywood sense) is reduced and not much is left for the reader's own re-discovery. So while I think that Witten's papers are excellent, they don't quite match my preferred genre which is dominated by excitement and the opportunity for the reader to rediscover things and find his or her own proofs (or disproofs) of the assertions.
Luboš Motl v 10:09 AM
Share