Well, multijets with 1 lepton and MET

All the observations at the LHC are so far consistent with the Standard Model, including the \((125.7\pm 0.5)\GeV\) Higgs boson. Well, kind of. There are some possibly emerging hints of deviations.

Multilepton and multijet excesses belong among the "so far small anomalies" that people like me carefully watch. And ATLAS just gave us a new reason to watch multijets today because they released the following preprint:


Search for supersymmetry at \(\sqrt{s} = 7\TeV\) in ﬁnal states with large jet multiplicity, missing transverse momentum and one isolated lepton with the ATLAS detector


The paper officially announces that the analysis based on the 2011 dataset is consistent with the Standard Model. However, the consistency isn't as good as you may be expecting. The data are actually pretty interesting. 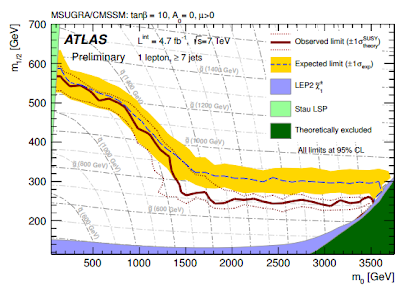 You see that the region beneath the thick crimson curve was excluded – but one actually expected to exclude a larger region, up to the dashed blue line above it. They're within 1+ theoretical sigma away from each other. Still, the decrease of the crimson full curve in the middle of the graph looks somewhat steep – as if the exclusion curve were trying to avoid the point\[

\] or a nearby point. I want to suggest to the optimistic reader that MSUGRA/cMSSM with these parameters could have something to do with the reality.

If you look at previous TRF blog entries on multijets and multileptons, you will see that the multilepton remarks dominate. However, you will discover a multijet CMS excess although it was based on the tiny 2010 dataset only.

Nanopoulos et al. have actually been somewhat excited about the 9-jet signals as a possible sign of their favorite "aromatic" \({\mathcal F}-SU(5)\) model.

There's obviously no smoking fun in the new ATLAS paper based on the 2011 data but if the excesses are real, then the collisions that have already been recorded should be enough for a 4-sigma bump or so.

Sometimes in November, at the Kyoto conference, Incandela of CMS promised a "small package of updates". However, both CMS and ATLAS probably only plan to release fully updated analyses with the whole 2012 dataset sometime in 2013.