Have you ever wondered whether there is a simple explanation why maths and exact sciences are mostly boys' game, why physics is a macho subject of a sort, why Feynman and Einstein slept with many women while Schrödinger lived both with his wife and his mistress, and why assorted lying bitches such as the global warming alarmists have small penises? 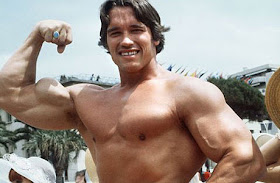 Well, Maria Shriver might agree that this guy won't be the best example of the testosterone link to "no cheating" and "no lying" but I wanted a recognizable symbol of testosterone here, anyway. ;-)

A new research partly funded from a "Starting Grant" by the European Research Council and freshly published in PLoS One may bring you the explanation you've been looking for:


A German-Dutch collaboration consisting of Matthias Wibral, Thomas Dohmen, Dietrich Klingmüller, Bernd Weber, and Armin Falk took 91 men, and transdermally improved 46 of them with 50 mg of testosterone while the remaining 45 males got a placebo replacement. Then...


Then they made all the men play a game in which they could increase the profit by lying and cheating. Lying and cheating was omnipresent. However, the dishonestly accumulated profit among the men unsupported by the testosterone was significantly higher than it was for the testesterone-improved men – and the excess stands at the 99% confidence level, something like 2.5 sigma.

The research was described by International Business Times, Eurasia Review, and others.

You see that the reported signal isn't overwhelming, relatively to the particle physics standards, but it looks nontrivial, too. At the same moment, there are many reasons to think that testosterone is responsible for reshaping the human body and probably also the human mind in many respects. In some sense, it makes it more structured and sharper, less smooth – just look at what it does with the muscles.

Of course, the testosterone can't be a totally flawless infallible universal explanation for everything. For example, I used to have debates about those matters with my former fellow Junior Fellow who is also a string theorist and female. I conjectured that she and other women who are achievers in physics had a higher level of testosterone. She replied that she had either a reduced level of testosterone or excess estrogen or something like that so my prediction failed – assuming that she had enough testosterone to tell me the truth about her hormone levels, of course. :-)
Luboš Motl v 6:27 PM
Share