In the hot summer of 1988, James Hansen gave his notorious and by now perfectly discredited testimony in front of the U.S. Congress in which he has predicted approximately 1 °C of warming for the following 25 years. It was an election year in America and the the first one in which the "climate will dangerously change" meme has made it to the presidential debates. 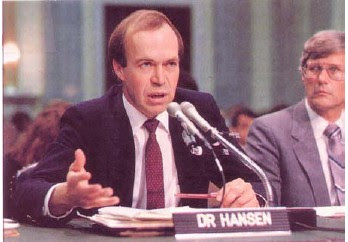 As this video reminds us, the topic was discussed by the candidates in 1988 (especially the VP candidates; thanks, Gene!), 1992, 1996, 2000, 2004, and 2008. Six times. That's it. Thank God. The accumulating years of experience showing that a panic is unjustifiable, the public's growing knowledge of the climate science, the 2009 ClimateGate, and the natural aging process have teamed up to guarantee that the climate panic hasn't been mentioned once in the 2012 presidential debates:


Well, of course, I am talking about the debates between the two candidates who have a material chance to win the presidency in two weeks.

Jill Stein, the Green Party candidate, is still promoting the climate hysteria. She has reclassified Barack Obama as a climate denier – welcome to the club, Barack – which actually means that she has reclassified her own climate alarmist movement as an extremist movement, next to the Nazis and communists, that has nothing to do with mainstream U.S. politics anymore.


I think that the "soft landing" is a natural form of slow death for this opportunistic, frequently mutating disease of the mankind. The candidates don't really know whether it would help them to mention the topic in one way or another so they prefer to keep it safe and say nothing about the topic. In 2016, once this hysteria cools down a little bit more, the candidates may already possess the hindsight that some of us have had for decades – and they will build upon the wiser atmosphere in the society – needed to openly admit that this whole hysteria will have been (and already has been) a completely irrational mass hysteria that the world economy has paid a trillion of dollars for (but it could have been much much worse).

Barack Obama gets something like C– from the climate activists. So you may imagine they are split into various groups that disagree whether or not a candidate with such bad grades deserves to be actively supported against a candidate who may be getting a D from them now – but who has actually gotten an A from Al Gore just 17 months ago, an "achievement" that Obama may have never achieved.

At the same moment when the climate insanity dropped from the top U.S. presidential politics, some journalists and activists claim that a majority of Americans – perhaps up to 70 percent – endorse the talking points defining the global warming doctrine. The only problem with this claim is that the study backing it wasn't prepared by a credible polling agency but rather by the hired guns at Yale's Department for Climate Hysteria and General Environmentalist Propaganda – the "faculty" at that place includes people like porn writer and train dispatcher Rajendra Pachauri and others. So you may be pretty sure that this "study" has nothing to do with the reality and the candidates know it very well.

We're not there yet but once mainstream America becomes really detoxified of this global warming junk, we in Europe and elsewhere will be looking at the other side of the ocean with hopes that our U.S. friends will kindly help us to detoxify our top-tier political systems, too (especially the EU-level layer in our case of the old continent) – in a similar way as they did in 1944-1945 but perhaps with much smaller casualties. ;-)


P.S.: Meanwhile, Czech president and global warming skeptic Klaus is as environmentally friendly – when it comes to walking the walk or, more precisely, biking the bike – as you can get. In China, he appeared on billboards promoting electricity-powered bikes. He didn't get any royalties; in fact, it was a surprise for him he's been used. ;-)
Luboš Motl v 4:07 PM
Share