Political colors in regional politics are fortunately not as important as they are in the national and international politics.

In the regions, the governors are ultimately doing almost the same things and they have to succeed with predetermined resources, and so on. Personal preferences and abilities of individual politicians/managers are arguably more important. 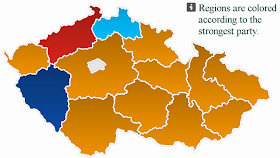 However, these may be just words I designed to reduce my immense dissatisfaction with the regional elections in Czechia that took over yesterday and today.


Modern Czechia is divided to 14 regions. You see that Prague in the middle is white because it wasn't electing this time. The absence of Prague, a city that is wealthier than the EU average (a nontrivial result for a post-communist country) which is also why it votes predominantly right-wing parties, makes the political map of the Czech Republic even more shocking.

Now I kindly ask the U.S. readers to switch their perception of color to the old continental one: the red color doesn't mean Republicans, it's the commies! And you see that in the Ústecký region in the Northwest, the Communist Party of Bohemia and Moravia – these stunning bastards haven't even materially changed their name since 1989 – is the strongest party according to the elections. Holy cow.

The only neutral region is the "light blue" adjacent Liberec region where the "Mayors for the Liberec Region" became the strongest movement. And the only region with an optimistic color on the map is "my" Pilsner region where I and others managed to make the center-right Civic Democratic Party (ODS, dark blue) the strongest party. With the regional turnout of 38%, it got 26.5%, followed by the orange social democrats with 25% and communists with 21%. TOP 09 has 5.5%. 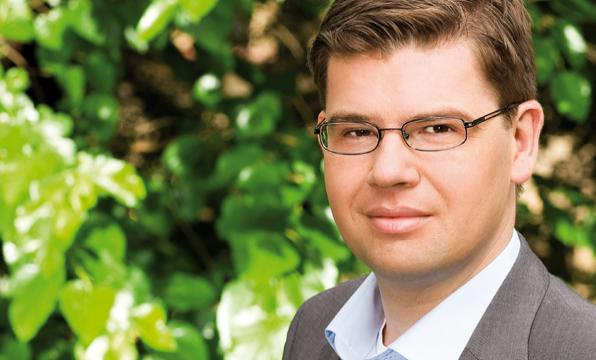 We already know that both right-wing ODS and left-wing social democrats will have 15 deputies – a tie – but because commies will add 12 to the Left while TOP 09 only adds 3 to the Right, the Left will have a clear majority and it will probably elect another left-wing governor. This makes the ODS' victory in our region useless. After all, many people voted for ODS mostly because it would elect Dr Jiří [George] Pospíšil [hurried up], a recently fired minister of justice (see picture above), to the position of the governor. He may have been popular just because he was fired by other right-wingers. I kind of like him for other reasons, too.

However, in all remaining 10 regions, the social democratic party became the strongest one. This list of regions includes Central Bohemia – the ring around Prague – where the former social democratic governor David Rath was caught red-handed with millions of dollars stolen in bribes. People just don't seem to care. I have an immense respect for human beings but the millions of individuals who vote for these communist scumbags and socialist bastards despite the devastation during the 42 years of communism, demonstrated corruption of social democrats in recent years, and the general irresponsibility of left-wing parties everywhere in recent years aren't full-fledged human beings for me. They're something in between human beings and wild animals and they significantly contribute to the deterioration of our nation – and more generally and globally, to the deterioration of the world economy and the mankind in general.

The results are pretty disgusting. I hope that the nation's government will at least survive for those 2 more years and avoid early elections so that a similar map won't materialize at the level where it matters most – at the level of the national politics – at least for two more years.

Otherwise Pilsen and the region around it is doing well. Last night, our national soccer team played against Malta – it was a mandatory victory (needed to qualify for a 2013 world tournament in Brazil) and after some suffering, they indeed beat Malta 3-to-1. For the first time, the match was played in Pilsen and the Pilsner fans (i.e. us) are just fantastic, enthusiastic, melodic, energetic, creative, welcoming, just great. This is true both for soccer and ice-hockey. After all, both of these Pilsner teams were rather successful in recent years, in the case of the soccer team, Viktoria, this included successes in the UEFA Champions League and UEFA Europa League. The ice-hockey team is led by Marty Straka known to fans of New York Rangers.

Pilsen is also preparing to be the 2015 European Capital of Culture.
Luboš Motl v 6:24 PM
Share