So far I have doubts that they have actually demonstrated it

The Telegraph and others discuss a research done at the Murdoch University in Australia (no, it's a different Murdoch) which claims that Michael Crichton's "Jurassic Park" is impossible because even at –5 °C – I hope they mean Celsius degrees – last meaningful filaments of DNA decay after 6.8 million years.

The Lizardly Americans on the picture below are much older so forget about attempts to resuscitate them, they recommend you. 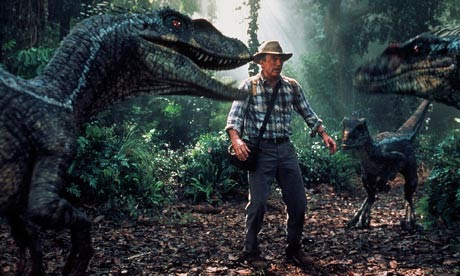 No journalist actually bothers to find the actual paper but we're TRF so here it is:


The authors of the paper (that is hidden behind a paywall, except for the abstract, because genetics isn't high-energy physics) confirm the exponential character of the decay of DNA molecules. The per-nucleotide fragmentation rate is \(5.50\times 10^{-6}/{\rm year}\) at a temperature they effectively estimate as 13.1 °C.


In the paper, there are also some details about the variations for different kinds of DNA, and so on.

I just erased a long piece of this blog entry that claimed to defend the good name of Michael Crichton, a late ex-reader of this blog, but that contained a flawed calculation of the macroscopic decay rates. Let me say that if a nucleotide breaks every 180,000 years – it's just the inverse of the per-nucleotide rate they mention – almost nothing is left after 180 million years which you need to return to the middle of the Jurassic. The probability is \(\exp(-1,000)\) for each nucleotide to be at its place.

Moreover, we know (or strongly think) that Antarctica hosted fossils 52 million years ago. In average, it's much colder than –5 °C these days. Some lucky dinosaur fossils could get to much colder conditions to be frozen. It seems that one just needs to reduce the decay rate by a factor of 20 to make the Jurassic accessible – according to their own arguments.

Let me mention that Michael Crichton was much more sophisticated than the Telegraph article tries to suggest – and than the Telegraph article itself. He was well aware of the decay of the DNA and he designed a science-fiction-style but still clever "fix": the DNA would be combined from pieces and the knowledge of the contemporary "cousins" of the dinosaurs could also be exploited.

With a large enough number of copies of the DNA fragments (broken at random places), you could get pretty far – much further than a biologist who needs a "complete undamaged DNA" to produce a dinosaur, otherwise he's at his wits' end. If you have 100-nucleotide-long fragments of DNA, and many copies of each, chances are that you may uniquely find the continuation from some partly overlapping copies of a similar region of DNA. For the typical "healthy fragments" of DNA of length 100 to be mostly OK after 150 million years, you need the per-nucleotide lifetime to be of order tens of billions of years.

Even if the skeptical conclusions are right, we may still resuscitate a mammoth which is also fun.
Luboš Motl v 1:11 PM
Share