Qatar is a peninsula located on the opposite side of the Pilsner Gulf than Iran. Its economy is the wealthiest one not only in the Islamic world – even in comparison with Kuwait and UAE – but it's almost certainly richer than the economy of your country. The GDP per capita exceeds $100,000; no kidding. Not bad for a nation (2 million people) whose average IQ is 78. Sometimes if your ancestors are dumb enough to choose a desert as their home, you may benefit out of the stupidity because even a desert may harbor amazing wealth.

The conference center above in the capital, Doha, will host the 18th session of the Conference of Parties of the UNFCCC, the loons who want to regulate carbon dioxide. That's what I call an irony. ;-) The meeting will start in one month, on November 26th, and will continue through December 7th.


You must have seen some of the unbelievable projects showing the incredible wealth of Qatar. I will return to them momentarily. Where does the wealth come from? Well, yes: it's mostly about oil. Petroleum represents over 60% of the GDP, 70% of the government revenue, and 85% of export earnings. And make no doubts about it: even the remaining part of the GDP is inflated because the products and services are sold to people who are rich because of the oil (see costs of living in Doha: 1 Qatari Riyal is $0.27) so the export fraction 85% is surely a more faithful representation of the relative importance of the petroleum.

Now, this nation hosts a conference of nutcases who want to regulate if not ban fossil fuels. Do you really believe that the folks in Qatar want to do something like that and send their economy towards another Islamic role model such as Bangladesh whose average IQ is actually higher, 82, but due to the absence of petroleum, its GDP per capita is 60 times lower than the Qatari one? Do you think it's fair that Poland whose GDP per capita is 6 times lower is being harassed because of every new coal power plant while the people who annually export oil for more money than the whole Pole's annual income are treated as generous hosts who are surely helping Pachauri et al. to fight against the evil fossil fuels, aren't they?

Maybe the Qatari folks – who have the highest per-capita CO2 production in the world – will get an exception for their good services to UNFCCC, just like Al Gore and lots of other privileged assholes who don't walk the walk.

It's just totally crazy. All the participants of the climate conference must know that it is just a preposterous theater, a sequence of crazy excuses for an exotic trip, an attempt to create policies that are so incredibly unjust and irrational that they simply can't be adopted by almost any nation. Everyone must know that the true believers who will go to Doha are much more irritated by climate skeptics who are trashing their pathological climatic religion than by those who are producing and selling megatons of fossil fuels.

Now, let me return to their not quite cheap projects. 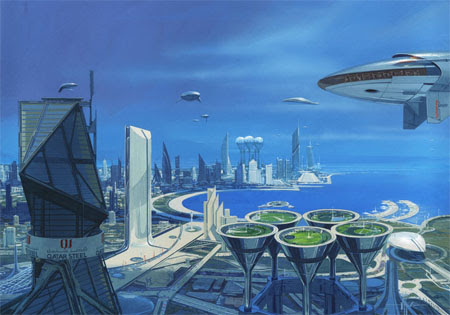 This is Syd Mead's plan to rebuild Doha. Personal jets flying around skyscrapers resembling huge wine glasses, or whatever it is. It may look like a picture from science-fiction novels except that many very similar projects are becoming a reality on a daily basis. For example, Pearl-Qatar is a multi-billion artificial island with skyscraper homes. See Google Maps to verify it is real.

Check also the "sustainable" Amphibious floating island. They probably also have some rotating skyscrapers even though the picture below may be from Dubai (in United Arab Emirates).

Sure, all these people will be thrilled by the ideas to ban fossil fuel. Also, they like means of transportations that don't depend on fossil fuels, for example bicycles. So Doha built a 35-kilometer-long network of cycling paths:

This is a paradise of energy-efficient transportation. Well, wait a minute. This cycling path is actually fully air-conditioned by mist. Imagine that while the EU or EPA bureaucrats are terrorizing you for turning on an incandescent light bulb, the biker on the picture enjoys the ride through 35 kilometers (yes, longer than the LHC) of a thick, not isolated tunnel that is cooled down from 115 Fahrenheit degrees i.e. 46 Celsius degrees (in the summer, average high is 41 °C i.e. 106 °F) to pleasant temperatures. Relatively to an incandescent light bulb, you surely don't need much energy for such a megafridge of pleasure that was built inside a desert, do you? ;-)

Well, a desert, sorry, I didn't want to insult you. For over $5 million, one hectare of the desert is going to pretend it is green. In the Czech Republic, you may buy one hectare of a forest for $2,500-$20,000, about three orders of magnitude cheaper than in Doha.

There are of course some projects related to the production of gas and other fossil fuels, for example the modest construction above. Also, Qatar will host the 2022 World Cup so it will build about a dozen of stadiums similar to the picture below – click at it for more (most of them are powered by solar panels):

Or check some of the hotels in Qatar.

I could go on and on and on. A vast majority of all these things has been paid, is being paid, or will be paid from oil revenue. But the climate warriors are going to transform Qatar to a global symbol of the fight against fossil fuels next month, anyway. The number of psychiatrists in the world is clearly insufficient to deal with this overload of cases. ;-)
Luboš Motl v 6:35 PM
Share