Recall that La Niña is a "little girl" in Spanish and as you may know, girls have "something missing" in the middle between the two hemispheres – in particular, the equatorial Pacific Ocean is cooler (has less heat) than the normal. It goes in the other way around for El Niño, a Spanish "little boy" who has something extra (extra heat) in the middle.

Due to the influence of the Pacific Ocean dynamics on the globe, a La Niña usually brings a cooling of the global mean temperature with a 6-month delay or so. The La Niña episodes may be partly blamed on relatively cool years 2011 and 2012. On the contrary, the globally warmest modern year 1998 was mostly due to the "El Niño of the century" in 1997-1998.

However, by June 2012, the cooler La Niña conditions were over and superseded by ENSO-neutral conditions. By August, it looked almost certain that in the 2012-2013 winter, Earth would be enjoying a warm El Niño episode. That episode could make the year 2013 rather warm; it's the first year the alarmists hope that it could break the records because the denier year 2012 will surely refuse to do so much like 13 previous years. ;-) The year 2012 will end up being very similarly warm as the rather cool year 2011, just a little bit higher than that.


However, it no longer looks like a safe bet that the Earth will switch into El Niño conditions anytime soon. In fact, the El Niño symptoms were visibly weakening in the last month. As the Weekly ENSO Report at the NOAA El Niño group announced yesterday, the most recent temperature anomalies (in °C) averaged over various regions of the equatorial Pacific are: 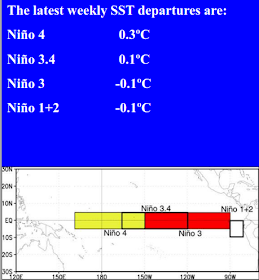 The map shows the locations of the Niño 1+2, 3, 3.4, and 4 regions. The number 1 starts near the South American western beaches and that's where the perturbations typically start, too. They're spreading towards the West (note that the thin equatorial strip is the only place where winds mostly go to the West and not from the West) and Niño 3.4 which is close to the middle of the equatorial Pacific is considered the most characteristic place that determines the ONI index.

You average the temperature anomaly over there and when it's above +0.5 °C or below –0.5 °C for five consecutive overlapping 3-month periods, you may call it the El Niño episode or the La Niña episode, respectively. However, you see that this parameter was standing at +0.1 °C in the most recent week, almost at zero, indicating neutral (Spanish sexless baby) conditions. 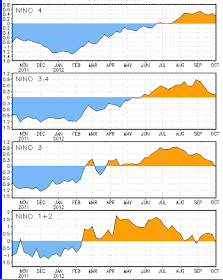 This is how the temperature anomalies varied in recent months. The region 1+2 is more variable; it is slightly negative, –0.1 °C. But you see that the region 3 was dramatically dropping during September and it is actually negative right now, also at –0.1 °C. Correspondingly, the wording was changed from an "almost guaranteed El Niño in coming months" to "possibly neutral conditions". Neutral conditions are also suggested by the CFS.v2 computer model average.

It must be frustrating for the climate alarmists who have been lying to the whole world for many, many years that the Earth is constantly heating up, perhaps every day or every year, and the most unhinged ones even say that this trend is dangerous and should force us to change the behavior or the basics of the industrial civilization. Except that since 1998 which is a rather long time ago, they haven't been able to "boast" which a warmer year. These folks must feel like piles of rubbish, unscrupulous fraudsters – i.e. as what they actually are.
Luboš Motl v 1:44 PM
Share