I am left speechless by the information that the EU has won the Nobel peace prize (Reuters; Nobel prize website). After Arafat, Gore+IPCC, and Obama, among a few others, it's yet another incredible choice. The 2012 Nobel prize in literature was just fine – a Chinese writer may be official but he's still successful in the world and the success isn't due to his OK links with the Chinese communist leadership. But a Nobel prize for the EU? 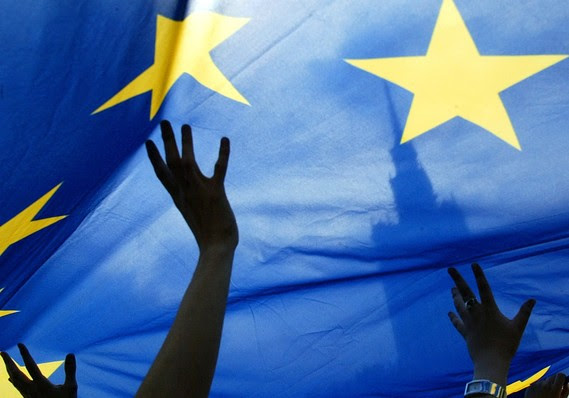 Picture from Market Watch, "EU’s Peace Prize and the mockery of timing" (click at it)

It's not even clear what it means for the EU to win the prize. What is the EU? I mean: Who is the EU? I am surely the EU. I've voted to incorporate my country into it and I became one of the 450 million citizens of this confederation. Is the prize supposed to be picked by some officials like the ex-commie and future-fascist Barroso? Why is he more representative of the EU than myself, for example? Or at least my favorite members of the European Parliament (who are surely against most things that Barroso stands for)? What the hell does it mean in the context of the EU that claims to be a democracy where people are created equal?


One thing is that I don't understand what it means for a confederation of countries – that, according to some of the naive proponents, even wants to become a single federal country – to win a Nobel Peace Prize. Why hasn't the U.S. won the prize? Or Czechoslovakia, for the Velvet Divorce? Or other countries?

Another question is why exactly the EU. In the recent two years, the EU has been the most important source of tension in the world among comparably large regions. The main source of the tension – the fiscal problems that spread everywhere – are exactly the attempts to unify countries that can't be united because they're very different, and exactly this source of global tension seems to be what the Nobel Peace Prize was awarded for. The EU is getting a previously prestigious prize for having destroyed the stability of the global economy, for destroying trillions of dollars in people's investments across the world, for suppressing the legitimate rights and freedoms of nations and individuals on the old continent, and for bringing the nations to hate each other, and all these "achievements" are being legitimized by the Nobel committee in the name of peace.

As I wrote many times, it's not even true that the European integration "caused" peace after the war. The causal relationship was the other way around: nations began to trade and be friends with each other because they no longer found fighting constructive. Also, the peace persisted for such a long time mainly because of fears of nuclear destruction that a conflict between European powers could lead to. So the U.S. and the USSR should really get the Nobel prize for the Cold War if this is the justification.

Just unbelievable – nevertheless, the crazy decision was actually unanimous. The Nobel Peace Prize has become a giant joke. Every decent citizen of a European nation should spit on every member of the Nobel Peace Prize committee whom she or he meets on the street.

One hour before the announcement, a Norwegian TV channel leaked the information about the 2012 Peace Nobel Prize winner. Czech president Klaus was reported to say that he didn't believe the information and he considered the report of the Norwegian TV to have been a joke. Internet polls at leading Czech news servers show that about 80% of Czechs disagree with the choice of the winner.

After the announcement, Klaus answered the journalists here:

Let me translate it for you:


Journalists: How would you react to the Peace Nobel Prize for the EU?

Klaus: Well, I made my first reaction around 10:56 or 10:57 am when it was just an internet report and I honestly thought it was a canard, a hoax, or a prank because even in my wildest dreams I couldn't imagine someone who meant it seriously. And this was my response before the official announcement. When I talk after the event, let me state that I think it is a tragic blunder.

The Nobel prize has always been meaningful because it was given to a human, to an individual, to a well-defined person for a particular achievement – a unique achievement. To reward an institution, in this case a bureaucratic institution, is an empty honor. I am not sure whether someone will even have the courage to dare to accept this prize. So please, this is probably not a recipe how to give the Nobel prizes.


Within 12 hours, the discussion at iDNES under this video attracted about 2,000 comments.

We have regional elections in Czechia and I am going to vote now.

Also, Iraq decided to buy 28 pieces of L-159 A, mostly new copies (4 old, 24 new) of a Czech combat aircraft, for 1 billion dollars. I wonder whether the folks who claim that an "imperfect" contract that a defense minister does and that removes a few million dollars from the treasury means "corruption" note that in this case, they actually added this impressive contract. A corruption may only occur if the corrupt person does or may actually benefit in some way. Anything else is just the inefficiency of the government – one of its basic and most universal properties.

A Capuchin joins the 99% movement