HadCRUT4: no warming for 16 years

The Hadley Centre at the Met Office released a new product replacing HadCRUT3, the temperature record of the Earth. It's called HadCRUT4. 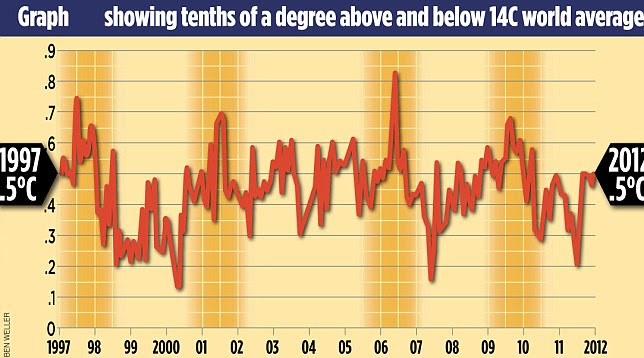 Various years are rearranged but look at the chart of the last 16 years, since early 1997, as discussed in the Daily Mail. There has been no trend for 16 years.

Well, is 16 years a long time or a short time? It is longer than 5 years but shorter than 50 years. ;-) It depends what you're comparing 16 years with. Relatively to some screaming by climate activists who want some urgent action, 16 years is a very long time. Note that if we didn't do anything about CO2 since 1997 – and except for wasting money for nonsense and tolerating unhinged alarmist bigots, we indeed haven't done anything with CO2 that continued to grow under the business as usual – there would be no detectable change for 16 more years. We could have just postponed any solutions by extra 16 years.

And here we're talking about seeing no trend in the 16-year period at all. Seeing no trend is a rather constraining condition. When a trend is seen, it's still extremely far from being a dangerous or harmful one. It's just like with your body temperature. A good thermometer may tell you that your temperature increased from 36.6 °C to 36.8 °C but that still doesn't mean you must visit a doctor (incidentally, the magnitude of the temperature changes is pretty much the same in both discussions). So you may estimate that even if there were an underlying trend that would ultimately show up, it could only start to be dangerous or harmful in 80 years – I just quoted an estimate. There's no strict boundary at which things "suddenly start to be dangerous or harmful" so you shouldn't be asking for a more accurate or more justified number.

In 80 years, people will have a better idea whether they want to try to geoengineer the Earth's temperature in one way or another. We're solving a different problem: whether we want to do similar things today. The plateau at the graph shows that plans to speed up such policies to a timeframe shorter than 16 years would be utterly irrational because the climate isn't changing that quickly. The noise, or the weather, is by far the dominant source of the variability at this timescale.