Higgs: living near the cliff of instability

Jester posted an interesting text on the instability of the Higgs field:


What's the deal with vacuum stability?


Of course, this topic has been covered many times on this blog, including on July 3rd and July 17th this year, but it's interesting to read Jester's twists on the story, anyway.

First, given the current best estimates of the top quark mass and the Higgs mass (other parameters don't matter too much), the quartic (=fourth power) coupling describing the Higgs self-interaction \(|H|^4\) almost certainly goes negative beneath the Planck scale. 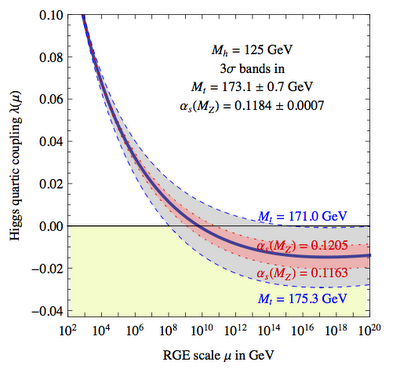 Taken from May 2012 paper by Degrassi et al.

The best estimate is that it goes negative at an intermediate scale near \(10^{10}\GeV\) but because of the uncertainties in the masses, the "crossover" may be very different. So our Universe is probably (at 98% confidence level) unstable.

But that's just the first part of the story.


When it's unstable, it doesn't mean that it has to decay immediately. In fact, above the scale when the quartic coupling \(\lambda\) goes negative, the sixth-order \(|H|^6\) and other couplings kick in. They restore the positivity of the potential but the true minimum of the potential only occurs for \(|H|\) comparable to a high-energy scale (either the Planck scale or at least something comparable to the crossover energy scale).

Now, it's debatable whether such a setup is compatible with the observations. I would say that it is not. From the viewpoint of the high-energy fundamental theory, "our" vacuum with a small \(|H|\) isn't a stable vacuum, so you can't expand around it. And you can't really expand around a maximum of the potential, even though it is also a stationary point. It's because one may sit at a maximum at most for a logarithmically long time.

So the possibility to sit at a small value of \(|H|\) seems to be a mere illusion, a theoretical artifact of the approximate low-energy effective theory. But if there were a minimum with a small \(|H|\) and if another minimum were far enough, we would talk about metastability. If the lifetime were longer than the current age of the Universe (or so), then the metastable Universe could survive for quite some time before it would quantum tunnel and it would be compatible with the observations. That's the situation people describe as "metastable".

I think this doesn't apply to our situation because "our" minimum with a small \(|H|\) doesn't even exist and the quantum tunneling story inconsistently mixes the true minima of the underlying high-energy theory with the "apparent ones" that only exist in its low-energy approximation. But let's ignore this subtlety; I may be wrong and overlooking another nearby minimum. If you divide the regions to stable, metastable, and unstable, the colors look like this: 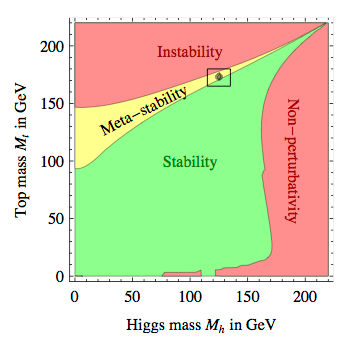 Our measured masses indicate that our Universe lives in the rectangle in the yellow strip! Note that if I am right, the yellow strip should really be included to the red region. In either case, you see that there is something very special about our Universe. It lives on (or near) the thin boundary between the stable and unstable worlds. In this graph, it looks like another parameter of our Universe seems to be fine-tuned. But maybe this fine-tuning is actually a cure for the "ordinary" fine-tunings we have known – we just don't know how the cure works yet.

In a Cold War metaphor, the unstable (plus nonperturbative and probably inconsistent, on the right side) red region is the Soviet bloc while the stable West is depicted in green. The measurements indicate that we live in Czechoslovakia, the crossroad connecting the West and the East. Well, during the Cold War, Czechoslovakia would belong squarely to the red Soviet bloc, I would say but some people give it a special color, yellow. Doesn't matter.

What are the chances that we end up in the thin yellow region? The percentage of the diagram that is filled with the yellow color is surely small. Note that for these – for the actually measured – "marginally unstable" values, the quartic coupling is close to zero near the Planck scale. But its derivative with respect to the (logarithm of the) scale, i.e. the \(\beta\)-function, is very small, too.

If you ask me what are the chances that I would happen to be a Czechoslovakia-born guy, a member of a medium-size nation, I would answer that the chances are rather high (after all, it's true), especially if you include the look-elsewhere effect and add the chances to be a citizen of any other nation of a comparable size. But the believers in some dogmatic anthropic principle who are Chinese and who believe that they belong to all majorities in the world could be surprised by the observation that the Universe is actually Czechoslovak. It's almost like if you managed to find Peter Higgs – who can be anywhere on Earth – just one meter from the LHC tube. How likely is that? 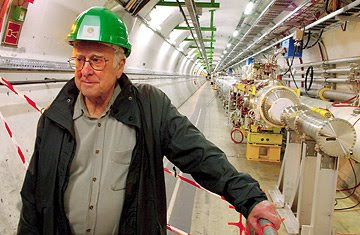 I agree with Jester that this fact that "we seem to be near the cliff" seems to tell us something. It doesn't have to be a coincidence. Let me add that various "asymptotic safety" may play with the idea that such couplings are zero near the Planck scale but none of these theories really succeeds (so far) in giving us a UV-consistent model incorporating gravity as well as non-gravitational matter and force fields. But there could be a related explanation. It could be linked to quantum gravity, inflation, ideas about the Conformal Standard Model, or just some technical vanishing of the quartic coupling and other things in a leading approximation of string theory (near the string scale) which may have a geometric explanation.