There's an interesting hep-ph paper on the arXiv today. It was written by Lawrence J. Hall, Yasunori Nomura, and Satoshi Shirai:


These authors claim that they have the most natural version of the split supersymmetry – recall that it's a version of SUSY where most of the superpartners are very heavy, inaccessible to the colliders, but some of them remain light, attempting to preserve the MSSM/GUT gauge coupling unification and to offer a dark matter candidate. 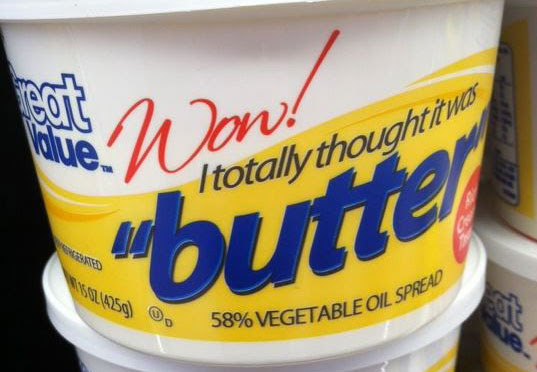 When talking about spread things, you totally had to think that this article was about butter, right? This name of the vegetable oil spread is WalMart's parody of "I can't believe it's not butter".

In this scenario, they seem to assume the gravitino and higgsinos are in the middle of the superpartner spectrum which means \(100\TeV\) or so. On the other hand, they seem to have a Planck-GUT gap justification for the claim that the squarks, sleptons, and other Higgs bosons are heavier, near \(1,000\TeV\) or something like that, while – because of some one-loop suppression – all the gauginos are much lighter, near \(1\TeV\) or well below it, and accessible by the LHC.

The typical mass hierarchy of the new particles in their spread SUSY model looks like the diagram on the left side. Click at it to magnify it.

You see our good old familiar \(125.7\GeV\) God particle (\(h\)) and somewhat above it, there are winos, superpartners of the \(SU(2)\) gauge bosons (W-bosons), and the neutral wino is the lightest superpartner (LSP) and dark matter particle produced in various ways.

The bino, the superpartner of the hypercharge \(U(1)_Y\) gauge boson, is just slightly heavier than the wino. The gluino is somewhat more heavier but still near \(1\TeV\). This makes is detectable by the LHC but the authors actually make the story for the detection more interesting: the gluino should be detected by "displaced vertices" because the relatively long-lived gluino is able to fly as an insivible particle for 0.1 millimeters up to 0.1 meters before it decays. That would be a cool signal at the LHC. The LHC would see collections of particles that "suddenly arise from nothing" away from the LHC beam pipe.

Also, the winos annihilate as dark matter – and this annihilation produces antiprotons that could be seen soon, too.

This model is motivated as a "modern ancestor" of split supersymmetry. But if you look at the spectrum and properties, it is not too radically different from the string-inspired models by Gordy Kane, Bobby Acharya, and friends – and from models of other people who talk about SUSY with "heavy scalars". This kind of a spectrum is alive and well – but it's not the only one so we don't know what's the right sketch of the superpartner mass hierarchies. Also, the Standard Model may continue to work well above \(1\TeV\), too.
Luboš Motl v 12:48 PM
Share