I discussed the same exciting possibility in November 2011 and May 2012 but because there's a new paper on the arXiv, I won't resist to make another comment.

and it was written by Gautam Bhattacharyya and Tirtha Sankar Ray. Even though the names may look like two names of the same ethnic origin, the paper is actually an outcome of an Indian-German-French-Australian collaboration. ;-)


"Our mistake is not that we take our theories too seriously, but that we do not take them seriously enough."

What could it mean in the case of supersymmetry? Well, it could mean that we're not trying to incorporate enough supersymmetry into our theories. The new Indian paper is another example showing why this criticism could be valid.


String/M-theory admits lots of vacua with 32 real supercharges; this "maximum" amount of supersymmetry is also referred to as \(\NNN=8\) in the four-dimensional notation. However, even 16 and 8 supercharges i.e. \(\NNN=4\) and \(\NNN=2\) is too many (too many new particles, too constrained interactions, no left-right asymmetry) so whenever physicists try to describe the world around us, they talk about models with 4 supercharges, i.e. \(\NNN=1\) supersymmetric theories.

That's fine but the reduction all the way down to 4 supercharges is only necessary because of some "problems" that are really problems for the matter fields – leptons and quarks (and perhaps the Higgs field) – only. For the gauge fields, one could perhaps survive a larger amount of supersymmetry.

The new Indian paper is another way to formulate a theory of this kind; they are adding a "chiral multiplet" transforming in the adjoint of the gauge group. Well, they mean the QCD \(SU(3)\) group only so they're cousins of the gluon and the gluino. What does it mean? It means that they are adding a complex scalar field and a Weyl fermion that transform in the same way as the gluons and gluinos and that mix with each other under the minimal \(\NNN=1\) supersymmetry.

Of course, the main reasons why I find this possibility attractive are
Those are theorists' reasons to be intrigued by the possibility. But the phenomenologists' reasons are cool, too. With the new chiral multiplet, one may predict the observed Higgs boson mass around \(125.7\GeV\) much more naturally than without it (aside from the new multiplet, they try to follow the rules of the cMSSM, so they are working within the so-called cMSSM+ framework where the plus sign represents the new multiplet).

Even more importantly, look at this graph of the predicted gluino (\(x\)-axis) and stop squark (\(y\)-axis) masses: 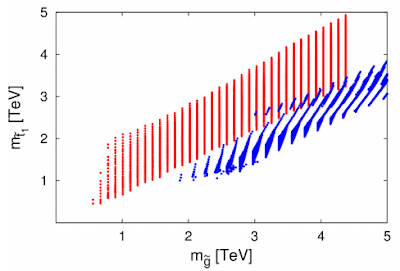 The blue region is the prediction from an ensemble of cMSSM models and they really want the gluino to start at \(2\TeV\) and the stop squark around \(1\TeV\). However, the red cMSSM+ regions nicely allow both superpartners to be as light as \(0.5\TeV\) or so. And that's quite something.

While I have never liked the wishful thinking of the model builders who always expected new physics right behind corner (they looked to me like if they tried to have a chance to get a Nobel prize as soon as possible which is not a legit motivation to direct physics research, I think), I do feel that a model that still allows the new particles to be this light – given the available data – is more natural, both in a vague and in the technical sense.

These models with some impressively light superpartners and "even more supersymmetry than we thought" remain viable and that's quite something. Maybe if the gauge fields come up with all the light superpartners of an \(\NNN=2\) multiplet, something even more dramatic awaits us in the gravitational sector. What about models with an \(\NNN=4\) graviton supermultiplet, to make it really ambitious? Maybe with such enhanced supermultiplets, we could get new tools and new cancellations to address some annoying problems including the cosmological constant problem.

I am thinking about brane worlds that make such things pretty natural. In fact, they're extremely close to the "toy theories of everything" that Barton Zwiebach uses in his textbook based on his lectures of string theory for the undergraduates. Wouldn't it be fun if the stuff taught to the youngest kids was actually the most physically relevant one? ;-)
Luboš Motl v 2:50 PM
Share