If you ever land in Prague again, you will be told that you're arriving to the Vaclav Havel Airport Prague (Google Maps). 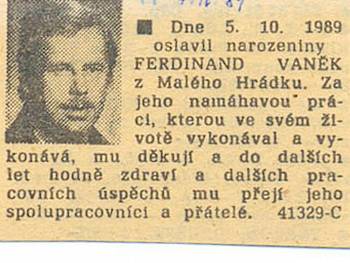 Rudé Právo, the official communist daily, published this entertaining birthday wish in October 1989, a month before the Velvet Revolution. It says that Ferdinand Vaněk (hero of some plays by Havel) of Malý Hrádek (a place where he had cottage) celebrates birthday on October 5th, 1989, and friends and colleagues are thanking him for the work he's been doing and he's still doing and wishing him lots of successes at work and health for the years to come. ;-) It appeared in the same newspaper that would routinely run hit pieces on Havel as an alcoholic, a bankrupt existence, and a spoiled frat from a pro-Nazi family.

The airport at the village/suburb of Ruzyně is being renamed today when the last president of Czechoslovakia and the first president of the Czech Republic would celebrate 76th birthday. He hated flying but one must be ready to such paradoxes.


My reactions are mixed but mostly positive. When I was going to meet President Klaus in Washington D.C. in early 2007, I enjoyed the U.S. Capital and its important landmarks – and the Reagan National Airport was another thing I found kind of pleasant, too. Havel is sufficiently well-known to the world's passengers so that his name in the airport identification doesn't sound too obscure.

Another event occurred in Czechia and it's sad for France. The dominant power utility, ČEZ, rejected Areva's proposal to extend the nuclear power plant in Temelín, due to their inability to fulfill some rather basic conditions. So the facility won't look like the picture above. Russians and Americans remain the only two contestants at this moment. The verdict will be released sometime in 2013.
Luboš Motl v 11:50 AM
Share