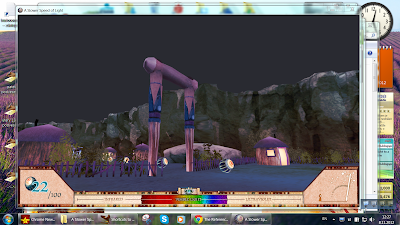 But there's some new competition on the market:


Here is their introductory video:

Once you download the game, move the directory from the ZIP file to your favorite place and run the EXE file (this is relevant for the Windows users; smug Mac users are smart so they don't need any help). No installation. The control keys are "adsw,escape,y" and mouse which changes where you look. Resolution, controls, windowed/fullscreen bit, and graphics quality may be changed at the very beginning.

You're a little child who dreams, much like every child (at least every child who reads TRF), about reaching the (near) speed of light. Instead of running too quickly, you may collect "orbs" – some decorated balls – and each of them reduces the speed of light a little bit which has the same effect. ;-)

I've played the game, it's very smooth – well, I had to assign the high-power AMD Graphics Card to the game in my switchable graphics first – and I collected all the 100 orbs in about 9 minutes. I didn't even have the time whether it's 9 minutes of proper time or lab time and whether it's in the string frame or Einstein's frame. ;-)

(Update: the game actually answered my question just a minute later. My proper time was 8:54 and the world time was 9:14. Time dilation in action. Most of the time, I was moving by nonrelativistic, but not too small, speeds.)

As far as I can see, it displays all the relativistic optical effects I know from Real Time Relativity and from theory.

Time dilation and length contraction in the direction of motion are combined with the delay from the finite speed of light. You see Doppler shift – things change color and the intensity of light goes up if you walk against the sources of light. It's funny to watch a purely relativistic optical effect – the world shrinks in the transverse direction, i.e. it looks "further", if you're moving forward, and it also expands if you move back.

This effect is cool and visible even if you're changing the speed near zero. So you're just accelerating from zero and you already see the colors change and the image shrink in the transverse directions (the latter fact effectively allows you to see "behind yourself"). Also, at high speeds, straight lines appear curved into arcs and circles.


I slowed light to a brisk walk in 00:08:54. I'm getting a Ph.D. in theoretical physics. gamelab.mit.edu/slower #slowlight


In my case, I didn't post it because it would be disrespectful towards 9/11/2001. Moreover, some extra shooting and adrenaline could be welcome to turn this simulation into a real game that deserves the title. ;-) 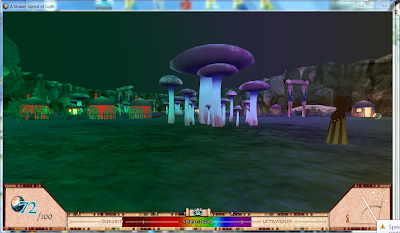 The Doppler recoloring affects different part of your image differently. That's also why I recommend you to try moving to the left and right, not just forward.
Luboš Motl v 11:43 AM
Share