The top Czech news server iDNES.CZ (CZ) just published a very interesting #3 story of the day, after our defeat of Spain in the doubles of the 100th final of the Davis Cup and after #2 reports from the November 17th anniversary rallies.

We usually consider Albert Einstein to be the ultimate pacifist although we also acknowledge his and Szilárd's abstract letter that contributed to the Manhattan Project. But Einstein's steps strengthening the U.S. military power have been much more intense than we usually admit.


The main other hero of the story is Mr František Navara, a high school teacher of maths and physics in Jihlava, a 50,000-people town on the Bohemian-Moravian border. In the 1930s, he was worried about the rise of Hitler and he was able to predict that the U.S. would be ultimately dragged into the war, too.

He also had an idea how to significantly change the balance of power on the sea. Torpedoes used to be navigated by cables. He designed a gadget that was able to navigate a torpedo according to the sound of the propeller. In 1938, he sent a letter with the plans to Albert Einstein in Princeton.

Now, Einstein was probably getting lots of letters from crackpots but this letter was special. Einstein replied to Mr Navara, admitting that the idea is extremely sophisticated. These two men began to solve some technical subtleties of the proposal together. Einstein wrote that he was convinced that the device may be brought to reality. 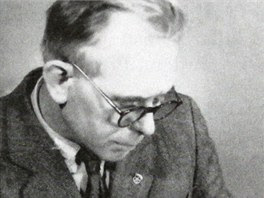 Mr František Navara, a teacher of maths and physics

This was far from Einstein's last contribution. Einstein actually guaranteed that Mr Navara had been invited to the U.S. and he met the bosses of the U.S. Navy. In 1941, they developed the technology and in 1942, it was already tested. Mr Navara didn't want a penny for his idea; he only wanted his name to be kept in secret because at home, in the Protectorate of Bohemia and Moravia, he would be awarded a death penalty, of course. He survived the war just fine.

At the U.S. side, these sound-navigated torpedoes have been a top classified secret, too. In fact, the pilots with this 309 kg heavy automatic torpedo weren't informed what they were transferring. The torpedoes' range was almost 1 mile, they would circle around the target, and finally get it.

Mr Navara who survived the war had worked as a mathematician in Prague and returned to the countryside later. Shortly before he died in 1972, he gave the letters to his son Erik. These letters managed to get to Christie's auction house in 1998 and were sold for $12,650 to an unknown collector.

Moskau by Los Rotopedos, a new hit of imported German music. ;-) It's a Czech remake of a song by a real German band Dschinghis Khan.

As experts add, the concept is no longer relevant in the modern era of advanced electronic technologies. However, at that time, it was revolutionary. Even if it managed to shorten the war by a single day, it deserves our deep admiration.
Luboš Motl v 7:42 PM
Share