Update: YK has pointed out (page 8: yess, passwords, I didn't have them, either) that the expectation was 6.5, not 4, so the confidence level is correspondingly weaker, about 3 sigma. Sorry.

Lots of new data were presented at the particle physics conference in Kyoto; lots of data (possibly much more important data) have been saved for the March 2013 Moriond conference, however.

Some papers by ATLAS and CMS continue to endorse the validity of the Standard Model at \(\sqrt{s}=8\TeV\). Even the branching ratios of the Higgs boson decay seem to return to their expected Standard Model intervals. In particular, ATLAS and CMS have published some studies with a similar outcome that used \(13/{\rm fb}\) and \(12.1/{\rm fb}\) of the 2012 data, respectively. The \(H\to\tau^+\tau^-\) decay seems to be compatible with the Standard Model now. CMS now sees a 4.5-sigma spin-0 scalar (not pseudoscalar) Higgs bump at \(126.2\GeV\) just in the ZZ channel. No new results on the diphoton channel. See Phil Gibbs on other Higgs news.

All this stuff is rather boring and we're used to it – it may be the not-so-new standard or it may be the silence before the thunderstorm. However, Matt Strassler has told us about the most interesting discrepancy unmasked in Japan.


The interesting observation comes from ATLAS' final states with 1 charged lepton (or antilepton) and 7 jets,\[

\] Note even Joseph John J. J. Thomson (the discoverer of the electron) had so many \(j\)'s. In this particular channel, 4 events are expected. Instead, they have gotten... now sit if you're not sitting yet... they have gotten 14 events.

Just for fun, let me offer you the particular numerical values of the Poisson distribution with mean \(\lambda=4\):\[

Prof Matt Strassler says that if the signal were real, there would also have to be an excess – possibly smaller excess – in the "somewhat smaller" final state with 1 charged lepton and 6 jets. Instead, there is a deficit in that channel.

Well, I don't think that Strassler's condition is necessarily true. It would be true if the excess were a continuous function of a continuous number of jets, \(k\). However, 6 or 7 may already look large, almost infinite, and one is tempted to say that physics is already messy at those "high" number of jets so the excesses have to be continuous.

But in reality, six or seven (now I prefer the words) aren't that infinite numbers. They're pretty small. There exist many kinds of reasons why the excess could be predicted for 1 lepton and 7 jets but not for a smaller number of jets. For example, the proton collisions may produce a pair of new particles and each of them may decay to 4 ordinary particles – either 4 jets or 3 jets plus a lepton.

I don't want to go into detailed models but of course, there are also some detailed models behind my tendency to pay attention to this particular excess. Search for multijet on this blog to review previous hints that the LHC may have seen other excesses in events with many jets in the past – and to be reminded of the "aromatic" models with flippons by Nanopoulos et al. who view multijet excesses as one of their favorite "smoking guns" of those \({\mathcal F}\)-\(SU(5)\) string-inspired models although their "real love" only starts at nine jets.

So we have another number to wait for: how many events CMS folks have seen in a similar 1-lepton-7-jet analysis?


Incidentally, many recent phenomenological papers start to prefer a light stop squark. The lighter stop could be \(375-500\GeV\) heavy while the heavier one could be close to \(1\TeV\). These figures are also desirable for the low \(B_s\to\mu^+\mu^-\) branching ratio that was recently bizarrely claimed by the mass media to "send SUSY to the hospital". 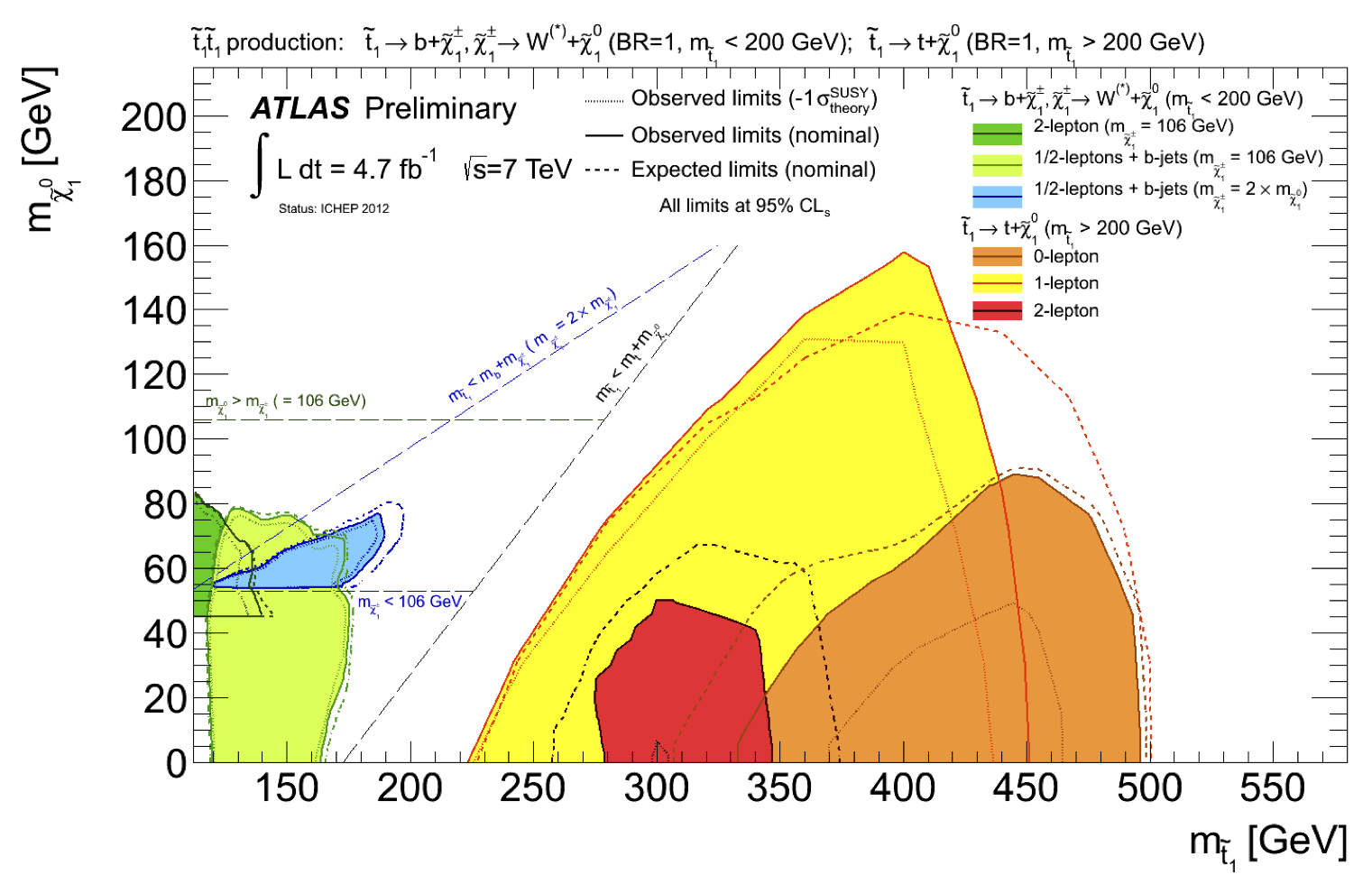 For your convenience, this is the Summer 2012 ATLAS exclusion chart for the LSP and stop squark mass. The combination \(150\GeV\) for the LSP and \(450\GeV\) for the stop seems to be more than compatible with the chart. If these figures are realized in Nature, ATLAS already has collected enough for a 5-sigma discovery of the stop by now.
Luboš Motl v 4:33 PM
Share