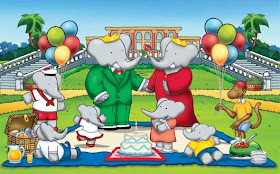 One of them is Babar the Elephant. Don't ask me which one – I would guess it's the daddy. Instead, I can offer you Peter F.'s elephant who can paint an elephant with a flower.


Observation of Time Reversal Violation in the B0 Meson System (arXiv, July 2012)


by the BaBar collaboration at Stanford's SLAC that directly proves the violation of T, or the time-reversal symmetry. Even though the result isn't new anymore, the publication was an opportunity for some vibrations in the media:


The T-violation is equivalent to the CP-violation, via the CPT-theorem, as I discuss below, but comments about the discovered "microscopic arrow of time" weren't just a new sexy way to describe experiments looking for CP-violation. They have actually seen the T-violation "directly". Physicists have known what would happen in this experiment for decades; but they actually performed it for the first time now (the detailed idea behind this experiment has been around since the late 1990s when the long experiment was actually getting started).


They studied B-mesons – the same particles whose decays were recently claimed to send supersymmetry to the hospital. Mesons are particles constructed out of 1 quark and 1 antiquark, roughly speaking, and "B" means that bottom quarks and/or antiquarks are involved. The high frequency of the letter "B" in "BaBar" has the same reason. In fact, "BaBar" is \(B\bar B\) [bee-bee-bar] as pronounced by Babar the Elephant.

One may say that the transformation of \(B^0\) into \(B_-\) was detectably faster than the inverse process. We often talk about 2-sigma or 3-sigma "bumps" and 5 standard deviations is a threshold for a "discovery". So you may want to ask how many sigmas these BaBar folks actually have to claim that the microscopic laws have an inherent arrow of time. Their signal is actually 14 sigma or 17 sigma, depending on the details, so the probability of a false positive is something like \(10^{-43}\). Compare it with the 10-percent risk of false positives tolerated in soft scientific disciplines.

Note that one doesn't need an exponentially huge amount of data. If most of the errors are statistical in character, you only need about a 10 times greater dataset to go from 5 standard deviations to 15 standard deviations. Just 10 times more data and the risk of a false positive drops from \(10^{-6}\) to \(10^{-43}\).

Our bodies (and many other things) are "almost" left-right symmetric. For a long time, physicists believed (and most laymen probably still believe) that the fundamental particles in Nature had to be left-right-symmetric as well, and behave in a left-right symmetric manner, too. And if some particles (such as amino acids) are left-right-asymmetric (look like a screw), there must exist their mirror images with exactly the same masses and other properties.

This assumption seemed to be satisfied by all the phenomena known before the 1950s. But experiments in the 1950s showed that this left-right symmetry that physicists call "parity" and denote "P" is actually violated in Nature. There are particles that are spinning much like the wheels of a car going forward – but they prefer to shoot to the left side, not right side, for no apparent reason. While \(SO(3)\) is a symmetry, \(O(3)\) is not.

Left-right-asymmetric physics (physicists say "chiral" physics, referring to the word "kheir/χειρ" for a "hand" because the left hand and the right hand differ which is why we use various hands for various right-hand rules) is easily constructed using spinors, mathematical objects generalizing vectors that may be described as "square roots of vectors". In particular, in 3+1 dimensions, or any even total dimensionality, one may write down equations for "Weyl [chiral] spinors" that will force a particle to resemble a left-handed screw, or right-handed screw, but forbid its opposite motion.

And indeed, all the neutrinos are left-handed while the antineutrinos – and it's the antineutrino that you get by a decay of a neutron – are always right-handed. Nature has an inherent left-right asymmetry built into it. Note that this correlation also violates the C symmetry, or the charge-conjugation symmetry that replaces particles by antiparticles. If you act with C on a (possible) left-handed neutrino, you get a left-handed antineutrino which is not allowed.

For a decade, people thought that a more sophisticated symmetry, CP, that you obtain by the simultaneous action of P and C is obeyed by Nature. If you mirror-reflect all the objects and particles and replace all particles by their antiparticles, you should get another allowed state, one that has the same mass/energy and behaves in the "same way".

However, in the 1960s, even this CP-symmetry was found to be violated. The spectrum of allowed objects is pretty much CP-symmetric in Nature and in all Lagrangian quantum field theories we may write down but the pairs related by CP behave differently. The complex phase in the CKM matrix is the only truly established source of CP-violation we know in Nature. New physical effects such as supersymmetry implies that new sources of CP-violation probably exist. They're probably also badly needed to obtain the high matter-antimatter antisymmetry that had to exist when the Cosmos was young, before almost everything annihilated, so that we're still here. But no clear proofs of other sources of CP-violation are available at this moment although some hints of discrepancies exist.

But there is a combination of operations that has to be a symmetry in every relativistic quantum field theory, the CPT-symmetry. This fact was proved by Wolfgang Pauli and is called the CPT-theorem. The CPT operation does C and P at the same moment and it also performs the time reversal – it reverts the direction of the arrow of time.

Note that among C,P,T, only T is an "antilinear operator" which means that \[

Why the CPT has to be a symmetry in quantum field theory – and almost certainly is an exact symmetry in string theory as well? It's because it may be interpreted as the "rotation of the spacetime by 180 degrees" which is a symmetry because it belongs to the Lorentz group analytically extended to complex values of the parameters (which is allowed).

The rotations between \(z\) and \(\tau\) are nothing else than \(tz\)-boosts extended to imaginary values of the "boost rapidity". By the analyticity, if the ordinary real boosts are symmetries, so must be the imaginary boosts. The imaginary rapidity is nothing else than the ordinary angle. Take the angle to be \(\pi\). This will revert the sign of both \(\tau\) and \(z\) – which means that it will perform both P and T. Now, if you analytically continue it back, the effect is clearly nothing else than the flipping of signs of \(t\) and \(z\), so you naively get the PT transformation and prove it is a symmetry because it is just a \(\pi\)-rotation.

However, you actually get a CPT transformation. Purely geometrically, by looking at the shape of the world lines, you can't distinguish PT from CPT because C only acts "internally" and doesn't change the shape of the world lines etc. The reason why the rotation by 180 degrees is CPT and not just PT is that the reflection of T also reverts the "arrow" on all the world lines, and particles moving backwards in time are actually antiparticles. (I could formulate an equivalent argument more mathematically and convincingly, but it's enough here, I hope.)

So CPT is always a symmetry. If you replace all particles by antiparticles; change their configuration to its mirror image; and invert the sign of all the velocities, then the subsequent evolution in time will look like exactly the evolution of the original system backwards in time (reflected in space as well and enjoying the inverted labels for all particles/antiparticles).

This has nothing to do with the arrow of time in statistical physics
Thank God, even Sean Carroll knows and acknowledges this fact.

I must emphasize that these effects are only large enough in special systems interacting via the weak interactions and they're weak, anyway. In reality, we know the "arrows of time" that have been discussed many times on this blog. We forget but rarely "unforget", eggs break but not unbreak, we mostly get older but not younger, the heat goes from warmer bodies to cooler ones but not vice versa, friction slows downs vehicles but doesn't speed them up, and so on. Decoherence produces nearly diagonal density matrices out of pure and coherent states but the opposite process – emergence of quantum coherence out of decoherent chaos – doesn't occur.

These manifestations of the "arrow of time" have nothing whatsoever to do with the violation of T that was discussed at the beginning of the article and that was experimentally demonstrated by BaBar. The microscopic BaBar-like T-violation is neither necessary nor sufficient a condition for the existence of the arrow of time in thermodynamics etc.

Even if you had microscopically time-reversal-symmetric laws of physics, they would produce time-reversal-asymmetric macroscopic laws with friction and the second law. It's because the origin of all these "macroscopic asymmetries" is in the logical arrow of time – the fact that the probabilities of evolution between ensembles of microstates have to be averaged over initial states but summed over final states, so the initial states and final states have to be treated differently, because of the basic laws of logic and probability calculus.

Again, the microscopic T-violation isn't a necessary condition for the entropy to increase and for other signs of the arrow of time in the macroscopic world around us.

The opposite relationship is also wrong; the microscopic T-violation wouldn't be sufficient for the macroscopic one, either. If you tried to deny the existence of the logical arrow of time, the BaBar-like T-violation in the microscopic laws of physics wouldn't be sufficient to produce the "huge" asymmetries between the processes that go in one direction and those that (usually don't) proceed in the opposite direction simply because the microscopic T-violation is far too weak and doesn't have a "uniform arrow" that would give the future its futureness and award the past with its pastness, anyway.

I plan to dedicate some article to statistical physics in a foreseeable future again. Right now, one must emphasize that the experimental detection of the T-violation is a detection of an asymmetry in the fundamental equations of physics that apply when the initial state and the final state are fully specified and known – so ignorance, the main prerequsite needed for thermodynamics to emerge, is absent.
Luboš Motl v 7:08 PM
Share