Leaders of the EU countries met in Brussels and they are trying to agree about the 2014-2020 EU budget – about a trillion of dollars. And as the Washington Post and almost everyone else notices, it ain't pretty. France clashes with Britain and smaller countries play their own small games, suggesting possible vetoes. 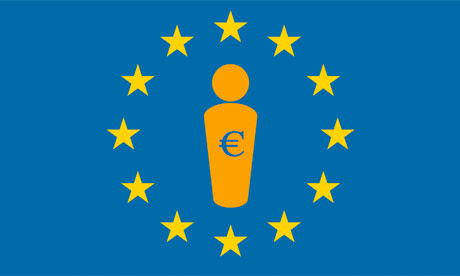 One could say that it's possible to define "overall fair rules" how to redistribute the resources. However, there's still a subtle question: How large is the overall budget? Now, the countries that are net payers obviously want the overall budget to shrink; David Cameron is a clear advocate of that. Countries that have been overall recipients, including Czechia, want to stay recipients and they typically want the budget for solidarity ("cohesion spending") to grow.

(Except for Prague, all regions of Czechia are counted as poorer regions that should be receiving this kind of aid. Czechia is a net recipient but on a per-capita basis, we're the smallest recipients among the post-socialist EU member states. Among the net recipients, we're the per-capita smallest ones after Cyprus, Spain, Ireland, and Belgium.)


It isn't easy to agree about all these numbers if 27 leaders have to do so. In fact, I find it somewhat remarkable that such clashes haven't occurred so far. Decades have been free of this obvious "egotist" behavior of the individual countries. But the idea about people and nations ready to pay anything to their fellowmen is a communist utopia so the clashes sooner or later had to start. They had to start as soon as some politicians devoured the forbidden apple and realized that they have previously acted in a stupid way.

Why don't these clashes occur in large unified countries, e.g. in the U.S.? Well, that's easy. These countries have a federal government that decides about all the member states of the union by majority or similar votes. So if your viewpoint on some part of the federal budget or redistribution seems to be in a minority, the federal elections are pretty much the last moment when you may try to change something about your political weakness.

But the leaders who are deciding about these EU budget rules aren't elected by the Europeans. As a group, they can't boast any political capital they have received from the voters in the whole union. They are only representing the individual nations – at most. So it's obvious that sooner or later, these politicians have to protect the interests of the single nation that elevated them in politics. When the clashes become strong enough, a failed unified country of course converges towards the annihilation of the shared budget. When no country pays anything to the "common cause", it's the ultimate fair arrangement that everyone has to agree with (although the former recipients may be upset, they can't do anything about it).

While leaders such as Merkel, Hollande, Cameron, and Nečas weren't elected by all the EU voters, the EU has some bodies that were elected in "European elections". I am talking about the European Parliament. But it's still true that each nation only elects its own fraction of the Parliament (it's the case in the U.S. Congress as well but when two continents are doing the same thing, it's not the same thing). It doesn't affect the composition of the representatives from the remaining countries. This makes a difference.

Even more seriously, the EU doesn't really have "its own money". It is receiving the money from the individual nations. That's why it's really irrelevant what the EU lawmakers think about the overall size of the EU budget. If they don't get the money from the national governments, they have nothing to redistribute so their opinions are only good enough to be written on urinals in Strasbourg.

This is of course a tough situation that may evolve in both ways. If the desire of the nations to think as a "single nation" prevails, they agree about things and create a framework in which the EU institutions don't have to "beg" for every eurocent all the time. If the EU were really converging towards a federation, and I hope and think it's not the case, the national taxes could even be supplemented or replaced by the EU-wide taxes which would clearly give the central EU bodies much more power. Such a new tax could be administered or modified by the European Parliament. However, the individual nations would first have to allow the EU to collect the money on their territories, according to its own rules, and order its law enforcement forces to enforce the EU-Parliament-sponsored laws, too. Just to be sure, those would be huge changes even if the EU tax rate would start at 1% or 2%. On the other hand, if the nations realize that their main identity is the national identity, and I think it's the case, the shared EU budget will be increasingly viewed as a controversial, artificial, obsolete construct and when these controversies are resolved, the decrease of this budget is the direction we should expect.

In Czechia, Beethoven's EU anthem has been rebranded as a celebratory "Song for Bára" (Špotáková, a top javelin thrower). They sing that their parents are crying when Bára wins and when they grow up, they will be like Bára, terrors of all the measurers. They're just not sure where they will look for their firefighters (Bára's partner is one of them).

It seems to me that it will become increasingly fashionable and natural among the top EU national politicians to protect the narrow national interest of their countries. The EU countries should realize that they're mostly a group of 27 spouses who no longer sleep with each other and they should attempt to go through a velvet divorce. It would be silly to overreact. Just because the prime ministers don't agree about the EU budget – usually for obvious reasons – doesn't mean that they're obliged to wage a war against the remaining EU countries. There are lots of things in the EU that don't cost almost anything, various multinational agreements that are good for everyone. And even when emotions run high and the EU converges towards some kind of a partial dissolution, they shouldn't forget that there are many things – not only the free trade but especially the free trade – that almost no one really wants to abandon simply because it works. It works without any propaganda. Those things that don't work and that are likely to lead to increasingly bitter arguments should be gradually abandoned.

Make no doubts about it: We in Czechia know what we're talking about here. Slovakia used to be a net recipient in the Czechoslovak budget. When this "Czech duty to pay" was supplemented by assorted coherent and incoherent memes about improved Slovak autonomy and independence in various ways, sensible Czech politicians – even though they had promoted federation for years – realized that these arguments became a waste of time and a complete dissolution of dissolution was the zeroth approximation to the most streamlined new arrangement we could think of. The Hyphen War (called "the Dash War" in Czechia: there was a meta-war about how the Dash War should be even called haha) about the presence or absence of a hyphen in Czecho(-)Slovakia became an early sign for many Czechs that we should just stop this hassle.

When I say these comments, it doesn't mean that I don't understand the Czech prime minister who is trying to get as much money as possible. Of course that I understand him. To collect more money from Brussels means that he will be viewed as a more successful Czech politician who has helped his country. At the same moment, I think that countries that want to remain "overall recipients" aren't really those that should have the last word. In the Czech case, we are talking about 2% of our GDP that is being added from the EU every year (or every arbitrary unit of time): our consumption plus investments are artificially increased by the factor of 1.02 by our EU membership. It's not a dramatic transformation of our finances we couldn't live without; at the same moment, it's comparable to our budget deficit so it is not quite a negligible amount of money.
Luboš Motl v 10:55 AM
Share