Do nation states belong to the 19th century? Is it bad?

Czech president Klaus had to go through another memorable, tense moment when he was giving an interview in Vienna:


After some sentences, he decided that the journalists from Der Standard, a major [social liberal] Austrian daily, didn't deserve more than he has already given to them. And I understand him very well. 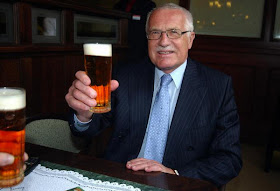 The journalists pretended that they were asking questions but in reality, they were trying to bully the interviewee or impose the politically correct ideology upon him. It quickly became very clear that these PC bastards had already depleted even the capital needed for Klaus' "Auf wiedersehen". ;-)


Let me analyze the dynamics of the interview a little bit. The first question was this one:


Now, in the era when most European nations struggle to integrate Europe more tightly, why do we see such strong Czech tendencies in the opposite direction?


You see that this question isn't just a question. It's an attempt to articulate an opinion and "corner" Klaus – pretend that he belongs to some small minority. Needless to say, the content is rubbish.

Some people in Europe – especially politicians who enjoy to travel across the Old Continent – may prefer an ever tighter integration. But lots of other people – and majorities in other nations – are highly skeptical about many or most of the recent (and even not so recent) unification experiments in the EU. Britons are traditionally skeptical. Greeks hate the idea of the European or German dictate. Most of the German public is already tired of being the key sponsor of the failed states within the EU. And so on, and so on. People have various – more or less legitimate – reasons but many of them think that many changes in the name of integration have been a mistake.

At any rate, Klaus still gave them an answer (why the Czechs are different from the idealized pro-EU nation envisioned by Der Standard):


I think that the Czechs are relatively sensible and rational. That's one part of my answer. The other part is that we remember our communist experience. We are sensitive, and in some respects perhaps oversensitive, when it comes to the elimination of freedom and democracy in Europe. That's why we are more critical than people in Western Europe and perhaps than Austrians, for example, too. And that's our attitude.


You may see that when they asked their second question, they didn't try to make Klaus elaborate upon any points he has said. Instead, they pretty much returned to the point they wanted to make and more or less repeated the first non-question:


Observers from the world of politics and industry have said that one of the lessons we learned from the crisis is that we must work hard to overcome all the obstacles on the road towards the European integration. You are arguing in the opposite direction: Why?


Now, "disobedient" Klaus (and his nation) is said to contradict not only most of the "obedient" European nations but also the apparent "consensus" of the powerful world of politics and the commercial sector, too. Note that Klaus' themes – national character and national histories – were completely ignored. Fine. Klaus still gave an answer to this modified first question:


This politics of "ever closer Europe", as they call it in English, is exactly the politics that brought us to the crisis. And we're being offered the same medicine to get out of the crisis. But we need something else. We have to change this entire model of the European integration. We mustn't continue in this direction.


Klaus entered the discussion about the actual causes of the recent recession and the sensible methods to shorten such downturns – because that's what they asked him about. Once again, this whole theme was avoided and you may see that the journalists worked hard to "protect" the Austrian readers from learning anything else from the heretic. So they repeated the first non-question for the third time, using new demagogic words:


Your counterproposal is an invitation to return us to the 19th century model of nation states which is largely obsolete today.


Again, this is not a question but the third salvo meant to marginalize everyone who isn't a naive uncritical pro-EU imbecile. It is not a question. It is an assertion about a complicated social scientific issue and a proper analysis of the truth value of this assertion would require a long interview by itself. I understand that Klaus must have gotten impatient and upset by this manipulation so his reply was short:


The birth of nation states...


Yes, perhaps, the origin. But their existence belongs to the 20th century. It's not 19th century.


The journalists didn't stop pushing their own viewpoint:


Do you view the nation state as a model for the 21st century?


And don't forget: saying "Ja" to the status quo and the last political model of the world that's been shown to work would be a heresy. ;-)

Obviously, the interview – and the interviewers – were pushy and dumb as a door knob (Klaus has been presenting similar opinions for decades so "questions" of the type "what a shock" – three times – don't exactly reflect a high intelligence of the journalist) and the interview was going nowhere. So Klaus found a concise way to stop the waste of time with these assholes:


I would answer in this way: I am against supranationalism. Is that clear? And I am in favor of intergovernmentalism. Yup? Good.


And he just went away.

Now, let me spend some time with the idea of the 19th century nation states. What was connected with the 19th century was the idea that the "state" serves a certain culturally or ethnically defined demos, a nation, and the internal organization is meant to resemble a "large family" in a sense, even though the citizens don't know each other in person. That was a totally modern idea that hasn't been replaced by anything better so far. It was inseparably linked to the birth of the modern democratic and capitalist countries.

But the very existence of state entities connected with one culture or with one ethnicity wasn't a novelty of the 19th century. Most states in the history did include many cultures or ethnic groups but in almost all of them, one of them was dominant and "in charge of things".

Nation states really exploded in the 20th century – so far it's the main century connected with the concept of nation states. But one must also mention that the attempt to dismiss the model of nation states by its links with the "dirty 19th century" is a bizarre piece of demagogy. In the same way, one could link the multinational states with the 17th century or some other century. ;-)

I, for one, prefer the 19th century. It was the century in which European nations and the U.S. found the political principles that really allowed them to thrive. It was the century in which the ideals of enlightenment, freedom, and democracy were turned into reality. Most of the political things that were added after the 19th century were rubbish and mostly brought us lots of suppression of human rights and lots of inefficiencies, not to mention two world wars.

Also, I can't resist to mention that it is extraordinarily ironic, stupid, or insensitive – depending on your viewpoint – when an Austrian journalist tells a Czech politician that the model of nation states belongs to the 19th century. Both of our countries were born (well, I mean Czechoslovakia in our case but the Austrian Republic at its current territory) in 1918, after the dissolution of a multinational empire that included all of our lands throughout the 19th century – the Austrian (and later Austrian-Hungarian) monarchy.

So in both of our lands, the 19th century is really linked to a multi-ethnic, EU-like state conglomerate governed by the House of Habsburg. It's the 20th century that saw the rise of the nation states over here and it was generally progress – at least at the beginning.

Klaus mentioned communism but there are other reasons that lead Czechs and Austrians to look differently at multi-ethnic countries. Well, the Austrians were the 1st class citizens in Austria-Hungary (and a born Austrian continued to lead the Third Reich, too, not to mention California) while the Czechs were the 2nd class citizens (and a Czech was at most a mayor of Chicago, and he needed to be murdered to save the U.S. president, anyway), as the absence of the word "Czech" in the name of the monarchy suggests. It wasn't bad, we never really complain, and many of us have partly good memories (inherited from great grandparents) about the empire. Austrians didn't bring us just bad things and some of the coexistence was decent and human for centuries.

I think that the Austrians should also be a bit grateful for neighbors who don't constantly complain about "historical injustices" which is what many former "imperial" nations hear from the (still politically immature) citizens of their former colonies. On the other hand, it's bad if journalists in Austria's prestigious dailies fail to understand that there is another simple reason why the Czechs could be more skeptical about multi-ethnic empires: we have almost never been in charge of them. German-speaking folks may feel that the EU is "their project". We just don't quite feel it this way. It's not quite our project much like the Soviet bloc wasn't quite our creation. We have learned to live with this risk of being a periphery or appendices of empires whose status may change and such a change is sometimes needed to protect our nation's skin.

But even if one forgets about all the historical baggage – Austria-Hungary, the birth of Adolf Hitler in Austria, Anschluss, the Protectorate, end of the war, expulsion of ethnic Germans, communism, Cold War – it's still not a piece of good journalism when journalists are trying to impose the idea that it is illegitimate to be skeptical towards ever closer European integration on the leader of a neighboring country, or any country, for that matter (including their own), especially when the interviewee is right.
Luboš Motl v 6:48 PM
Share