Ivy Mike released 188 times more energy than Hurricane Sandy
Update: All claims below based on the Sandy energy numbers are wrong and reflecting a temporary credulity and stupidity of mine. See comments for some discussion

Hungarian-Jewish-American physicist Edward Teller had a great day exactly 60 years ago, on November 1st, 1952. For some years, he's been working on an idea originally due to the great physics guru Enrico Fermi (most likely, and one invented in Summer 1942) which totally fascinated him: a bomb getting its energy from thermonuclear fusion. 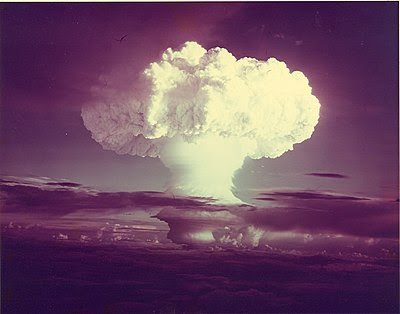 Ivy Mike, the pioneering device based on the Teller-Ulam design, was finally ready for detonation on the Enewetak Atoll (atoll = coral island encircling a lagoon) in the Pacific Ocean: Google Maps, crater (yes, the Elugelab [codenamed Flora] island in the the atoll [not the whole atoll whose radius is 15 km!] ceased to exist and was filled with water; before, after, source).

This device was one of the main reasons we have had peace for many and many decades; Edward Teller should have clearly gotten the Peace Nobel Prize that was jokingly given to the "European Union". How strong was the explosion? And how did the device work?


At the center of the device, there was a cylindrical rod of plutonium, the "sparkplug", that had the task to ignite the fusion reaction. It was surrounded by a natural five-ton uranium "tamper". The external side of the tamper was made of a mixture of lead and polyethylene and these sheets were sending X-rays from the primary to the secondary. The X-rays acted by their huge pressure and temperature.

All the lead, plutonium, and uranium stuff was there just to help the primary actor that was being tested – the cryogenic (=impractical for mobile bombs) liquid deuterium fuel at the very center (plus some tritium) – to get a bit excited and warmed up.

The whole active object, also named "sausage", was encapsulated in 25-30 centimeter thick steel. This whole toy was 54 tons heavy, 619 cm tall, and 203 cm in diameter. With other external components, Ivy Mike weighed over 80 tons (again, that's why it was impractical for mobile weapons). When it exploded, it produced 10-12 megatons of TNT but 77% came from the fission of the uranium "temper" (about 450 kg out of 4.5 tons of the uranium was "burned" releasing the equivalent of almost 8 megatons of TNT) but the remaining 23% may be attributed to fusion. The fireball was 5 km wide and the mushroom went to 17 km altitude in 90 seconds and 30 km in 150 seconds.

Alexander Ač told us about the energy stored in the otherwise mediocre Hurricane Sandy. His source states that Sandy "contained" – whatever it exactly meant – 0.222 petajoules of energy. It's only larger than the analogous numbers for other, stronger storms because Sandy's figure includes the wind energy from a larger area. If you know how to divide numbers, you can easily calculate that Ivy Mike released the same energy as 188 times the Hurricane Sandy. And it was pretty much produced by one right-wing physicist. That's a simple quantitative explanation why you shouldn't expect right-wing physicists to be overly impressed by the energy of the Hurricane Sandy. ;-)

But if the worshipers of the greenhouse effect and its hypothetical but indefensible effects on the weather events feel humiliated, and they surely should because they are, let me calm them down just a little bit. The research project initiated in 1951 that led to Ivy Mike had a nice name: the Greenhouse. :-D

(Yes, I needed Ivy Mike whose energy was equivalent to 750 Hiroshimas. Hiroshima wasn't enough to beat Sandy; it released about 1/4 of Sandy's energy. On the other hand, NYC rats are stronger than Sandy.)

The crater created by the blast was 3 km wide and 60 meters deep. 80 million tons of rocks were vaporized. The blast didn't proceed as expected – it was two times better i.e. stronger. One pilot who was supposed to pick some air samples died when he ran out of fuel. All elements including Einsteinium and Fermium were produced. A 50-kilometer vicinity of the atoll was substantially radioactively contaminated. You don't want to play with similar toys in the New York City; Sandy is just fine.

Harry Truman who politically supervised the research wasn't the only one. At that time, the Soviets were already working on something similar although their research was arguably not quite independent. Sakharov's Third Idea – the Slavic term for the Teller-Ulam design – got tested in 1955, three years after Ivy Mike (6 times lower yield than Ivy Mike). But already in 1953, one year after Ivy Mike, the USSR tested Joe 4 (0.4 megatons of TNT, 25 times smaller than Ivy Mike) based on a different "Sloika" philosophy. The strongest (thermonuclear or otherwise) man-made explosion ever (so far?) was the Tsar Bomba in 1961. At 57 megatons of TNT, it was 5 times stronger than Ivy Mike and 1,000 times stronger than Hurricane Sandy. Take it, Yankees and weather alarmists. ;-)


P.S.: Just a comment on the energy vs world energy consumption. The Ivy Mike blast may look very large and you could think that it would be great to use it as a generator of energy. But I mentioned that the blast released \(4\times 10^{16}\) joules of energy. It's a lot but the world's annual energy consumption is around \(4\times 10^{20}\) joules so you would have to tame 10,000 Ivy-Mike-like blasts a year to replace the existing sources of energy! But you could imagine it's doable. Forget about peaceful thermonuclear power plants and use a blast to raise a lot of matter to some altitude, or heat it, or something like that. 30 such Ivy Mike blasts a day may produce the electricity for the whole mankind. ;-)
Luboš Motl v 9:45 AM
Share