Fermi may be seeing a 6 GeV WIMP, too

According to the internal counter, this text is the 5,000th published blog entry on this blog.

At a Fermi Telescope Symposium, the Fermi Collaboration revealed its opinion about the celebrated Christoph Weniger's \(130\GeV\) line:


As Jester mentions, the glass they offer is half-full or half-empty, according to your personal taste. There's some confessed excess near \(135\GeV\), which is their new central value of the energy after some adjustments, but they only admit a 2+ or 3+ sigma result, depending on whether they zoom near the Galactic center.

Moreover, they see "similar" excesses at other frequencies located in other portions of the sky and the would-be signal near \(135\GeV\) is less continuous than the dark matter interpretation would suggest.

But there's something else interesting in the data.


Look at this graph: 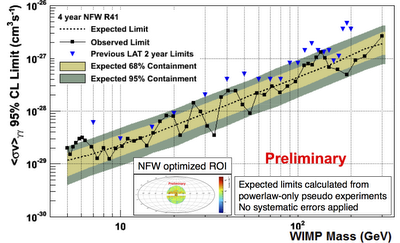 It has some excesses and deficits. There's some 2.5-sigma deficit at \(E=35\GeV\) but what is even more intriguing is the near-3-sigma excess at \(E=6\GeV\). If the WIMP dark matter particle had this mass, it could pair-annihilate into two photons of the same energy.

And a WIMP of the mass slightly below \(10\GeV\) is suggested by the Dark Matter Is Seen (DMIS) allies among the dark matter direct search experimental teams. Could it be compatible? Could they hint at the same light dark matter particle? 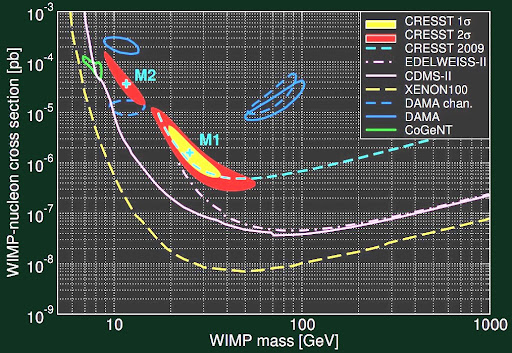 Recall that, as the chart above implies, there's some disagreement between the Dark Matter Is Seen allies concerning the mass and cross section of the would-be WIMP. In particular, CoGeNT could be kind of compatible with \(6\GeV\), or at least \(6.5\GeV\) is within its 1-sigma zone. The other DMIS allies prefer somewhat higher masses around \(10\GeV\).

Recall that Fermi has been a peripheral warrior for the DMIS coalition in the Is Dark Matter Seen War for more than a year as it has backed up some PAMELA's claims about the positron fraction (for higher energies than \(10\GeV\)).
Luboš Motl v 7:50 AM
Share