It's wrong to worry about the "fiscal cliff"

Starting from January 2013, America has a chance to restore some balance in its federal budget that's been getting worse since Clinton's surplus years around 2000 and that switched to seemingly permanent astronomical figures after the 2008 recession.

If no bills were changed or added in the following 6 weeks, spending cuts would come into force and some temporary (mainly Bush) tax cuts would be abolished again. The deficits would instantly start to improve, see the brown curve: 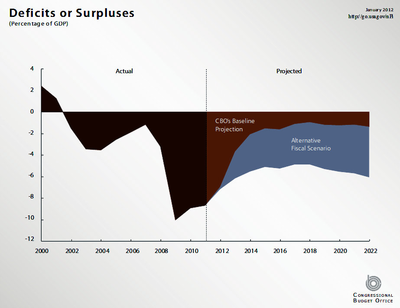 However, some people invented the term "fiscal cliff" for the relatively sudden improvement of the U.S. budget deficit in order to suggest that this good thing is actually a bad thing. It's a fiscal cliff but the sign is such that the U.S. may start to climb out of the deep Greek $hit it's been sinking into. But a "hike from the mud in the Mariana Trench towards the summit at Mount Everest on a sunny day" doesn't sound as catchy as the "fiscal cliff".


The advocates of this "evil fiscal cliff paradigm" are mixing some of the usual crackpot left-wing economical misconceptions. They say that a too large part of the reductions of the deficit would be paid by the middle class; and they say it's bad to improve the finances discontinuously.

You may see that the first complaint is just populist demagogy; and the latter is just a wrong model of economics. It's good that at least some writers, e.g. Michael Sivy in the Time Magazine and WSJ's Jonelle Marte, agree that it's wrong to worry about the "fiscal cliff".

Concerning the first objection, about 2/3 of the deficit reduction would be paid by the middle class. One is expected to be upset that it's a high percentage. I am amazed by such reasoning. The middle class is the class that mostly "owns" the political system of America – the class whose a$s must be licked by pretty much every realistic politician in the country – so it's obvious that it must pay the majority of the money, too. The middle class is estimated to represent 45% of the U.S. population but it depends on the definitions.

However, the "poor class" doesn't pay almost anything and consumes a lot of the state expenses. So you only have the middle class and the "rich class", or whatever is the name. The "rich class" clearly can't pay all (and not even most of) the public expenses even though it's clearly a favorite dream of socialist populist demagogues who have forgotten that socialism only works until you run out of other people's money.

So in a working economy, most of the burden simply has to be carried by the middle class, by the "largest productive class". It's almost a tautology.

But it's obvious that there will be differences between left-wing leaders and right-wing leaders. Right-wing leaders will try to introduce some kind of a fair distribution while the left-wing leaders prefer a criminal system that steals the money from the successful and throws them to the unsuccessful, jealous, lazy 47%, so to say. It doesn't work, anyway, because when a high-paid employee is needed in a company, the company – and, therefore, indirectly poorer people in the company – must pay him whatever is needed so that he has a sufficient amount of money after taxes, anyway. Let me not talk about the distribution of the tax burden because it's a matter of political and moral preferences. Quite generally, the progressive tax system is silly. The real competitors should be the flat tax and various types of regressive systems but it's almost politically incorrect to even pronounce this trivial fact these days.

Instead, let's focus on the other objection, namely the opinion that it's unhealthy for the economy to reduce the budget deficit abruptly. It's just silly. The budget deficit is something that should be just a small perturbation of the country's GDP – some random number close to zero or 3 percent of GDP or whatever deficits you find tolerable in the long run. Because and as long as it is a nearly infinitesimal random number, it can't hurt when it's changed abruptly. It's what random numbers do (if they're white noise).

Needless to say, this description doesn't hold for the U.S. budget because it's not a small random number. Instead, it has become predictably huge. And it's a major problem. When the budget deficit is immediately brought close to zero, it's simply a cure to a bad condition so it can't possibly be bad. When your stomach's pH differs from the recommended value (about 2-3), it doesn't hurt when you bring the pH to the right value instantly i.e. discontinuously. Note that when expenses and revenues jump discontinuously, people's "worth" is still continuous. One needs to go to the second derivative of "worth" to see a delta-function and it's normal for a the second derivative of the "worth" to have a similarly singular behavior. Trying to make even higher derivatives smooth would be even more preposterous.

Now, when the government abruptly reduces its large budget deficit, it surely leads to a drop of the GDP. The GDP is the most inclusive measure of the economic activity which is why it's used as the measure of the wealth of countries by those who respect economics as a quantitative science. And so do I. However, the health of the economy is only an increasing function of the GDP assuming that certain imbalances are zero. If they're not zero, it's a subtle question how the most natural definition of the "health of the economy" should treat these imbalances.

Let me propose the following measure to replace the naive GDP:


If there's a surplus, LMGDP will be greater than GDP but I kind of doubt that the U.S. will need this extra comment anytime soon. ;-)

What is the logic behind LMGDP? It's simple. When there's some budget deficit, it means that the government pays for certain services or products that would be unsalable if the deficit were what it is supposed to be, namely zero. Imagine that the most natural way to eliminate the deficit is to reduce the cheques that the government is directly paying to various groups of citizens who almost instantly spend the cheques. If you reduced these cheques to balance the budget, these people would buy less and the production would have to drop by the same amount (let's assume they're buying purely domestic services and products, for the sake of simplicity, although I realize it's not the case – but I don't want to discuss the trade deficit now).

So if the distortion of the market conditions caused by the budget deficit were eliminated, the GDP would drop approximately by the budget deficit itself. That's why LMGDP is a nicer measure of the "undistorted economic activity" in a country. One simply wants to subtract the "fake activity" that was really paid for by subsidies and no one would want it if the conditions weren't distorted.

So the right question isn't what GDP will do when the budget deficit is abruptly reduced; a much better question is what LMGDP does. And I am actually not sure whether the policies that may come into force since January 2013 will increase or decrease the LMGDP. If they will increase LMGDP, i.e. reduce the GDP by less than the amount they subtract from the deficit, then the changes that may apply in January 2013 are clearly a good thing in my understanding of the situation.

Incidentally, it's fun to think about the value and evolution of the Greek LMGDP instead of GDP as a function of time. When the budget deficits become significant, LMGDP gives you a completely new viewpoint from which you may evaluate the situation. In particular, it's useful to quantify the countries' debt as percentage of the annual LMGDP. For countries like Greece, you will get a much larger – and much more realistic – percentage. The Greek "actual" or "undistorted" GDP – and LMGDP is a way to quantify it (although I think that an even lower figure than LMGDP encodes the "corrected equivalent GDP" of Greece) – is actually much smaller than the conventionally used GDP. That's why the percentage we often use – debt at 160% of the GDP, and so on – understates the severity of the actual problem (a greater-than-visual-field problem that will only be seen in its entirety once Greece actually starts to cure the imbalances if it ever does). Whatever currency Greece will use, if it doesn't bankrupt, it will ultimately have to see that the actual "undistorted GDP" – e.g. LMGDP which isn't artificially doped by the budget deficit steroids – is much smaller, and the debt is therefore a significantly higher multiple of the undistorted GDP.

If the U.S. turns out to be unable to bring its deficit to tolerable levels closer to zero – whether or not its economists fabricate a new propaganda "explaining" why such a deficit reduction is a bad thing – it will only mean one thing: that the country's problem is really a long-term one and serious investors should trust the country in the future much less than they have trusted it so far. If America isn't capable of swallowing the "fiscal cliff pill" sufficiently quickly, then it's a country that is addicted to debt and going towards the Greek-like "fiscal chasm" – and be sure that the sign of this chasm is opposite than the sign of the good old fiscal cliff.