The king of pop is dead; long live Al Gore.

Honestly, I think this "adjust frequencies" music genre is pretty good. He could join the young rapping Australian climate alarmists, too.

Yesterday, I watched Al Gore's "Dirty Weather" show for about 30 minutes in total and Anthony Watts' competing TV program for more than hour; it was especially Roy Spencer that made the watching irresistible.

The difference couldn't be more striking. It's often being said that the climate panic is driven by scientists. But Al Gore's show offered virtually no scientists. It offered lots of ordinary people who constantly and repetitively complained that they only had one planet and the planet's weather should be called the climate, it was dirty, and the dirt was caused by fossil fuels. If you have read the previous sentence and if you have listened the 3-minute song above, it's equivalent to watching of the 24-hour-long program.


On the other hand, Anthony's show overwhelmed the viewers with amazing data, often very new data and new ways to look at the climate system and related issue (I spent some time with Monckton, McIntyre, and almost the whole time with Spencer). Gore's show was targeting a naive viewer who knows nothing and who wants to be converted to some no-longer-too-fashionable post-modern religion; Anthony's show was addressed to viewers who like to think and know things.

Too bad that Gore managed to squeeze his program to the main page of ustream.tv which is why almost 10 million people watched it at least for seconds; Watts' show didn't enjoy this advantage so the number was roughly 500 times smaller. This comparison looks bad, especially because Watts' program was by far superior.

At any rate, Al Gore's company is trying a new wave of "spam movement" attempting to contaminate the climate scientific blogosphere by alarmist junk:


You may apply for an invitation. Incidentally, I don't know how they want to assure that the spam terrorists whom they employ will be alarmists and not agents realists. ;-)

While Al Gore and his thugs and sluts show that they have absolutely no moral restrictions, they also make it clear that they have virtually no understanding how the Internet works. It's particularly ironic for a guy who claims that he took the initiative to create the Internet.

Imagine those hundreds of brainwashed, stupid, naive, young folks who register their usernames in order to participate in Al Gore's "Reality Drop" game. They will compete in the amount of pseudoscientific spam they will be able to post on skeptical climate blogs. However, when some of them tries to post his first package of comments that look like organized spam, his or her identity and/or IP address will be almost instantly banned. I am pretty sure that it is equally easy on other blogs, too. Hasn't Al Gore learned that John Kook's similar program was an utter failure, too?

The Internet had to learn how to deal with these infantile diseases many years – and I would say decades – ago. The brainwashed thugs competing in Al Gore's spam game will be spammers of the least sophisticated type which is why they may be neutralized in the simplest way, too.

Incidentally, one can't win anything by this spam terror. The debate about the climate change has advanced to a stage that is much more information-based than what Al Gore et al. seem to assume. People who care actually know quite something about the atmosphere, the weather, and the climate. Even though the degree of ignorance in the general populace is significant, it's the kind of ignorance that is bound to continue.

The people who matter are those who pay some attention to the issue. There may be millions or tens of millions of people in the West who belong to this category and almost all of them know about the climate more than Al Gore does. Almost all of them are skeptical at least about some claims that are being made by the hardcore alarmists. All of them have noticed that the alarmists in particular are sometimes using dirty tricks to artificially help their "cause" – and this will be just another example of this fact. And almost none of them may get influenced by naive talking points and "universally alarmist" answers to everything that are prepared by Gore's headquarters to be copied all over the blogosphere and online media.

So I would say that by this new project, Al Gore exposes a combination of his utter lack of morality, lack of care for the hard life of his own fans, ignorance about the climate, ignorance about the way how the Internet works, as well as lack of any managerial skills, especially when it comes to the communication industry. Yes, it is another irony for a guy who claims to be a boss of a TV. Thank God that America didn't have to go through the experiment of putting this man in charge of the White House and beyond. 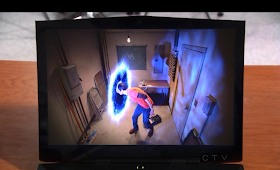 Last night, Sheldon tried to enter the universe #44 by a man-made wormhole, at least that's what the horrified Rajesh and Howard believed while watching their spy cam. You shouldn't have missed it. ;-)
Luboš Motl v 4:22 PM
Share