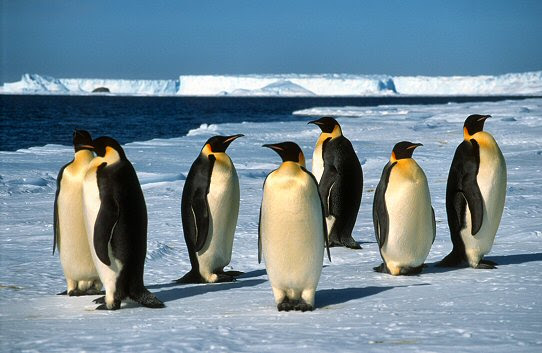 Peter F. sent me an interesting link commenting on the interpretations of the growth of the Antarctic ice:


Minutes later, Marc Morano exposed another article referring to some of the very same people that already solved the mystery:


Climate alarmists personify the scientific dishonesty at the beginning of the 21st century. To defend their indefensible proposition that the climate will be changing in a dangerous way in a few decades if not now, they use a simple tactic to interpret all weather phenomena.

The polar weather is a trivial example of this double-faced attitude by the crooks.

The Arctic sea ice area has experienced a decreasing trend in the last 33 years. So it's surely dangerous, caused by CO2, and will threaten the human civilization if not life on Earth.

It just happens that our planet has two poles.

The Antarctic sea ice area has experienced a growing trend in the last 33 years although the absolute rate is slower than the melting trend of the Arctic. Nevertheless, it's not as convenient because the warming should be "global", not "hemispherical", so the Antarctica isn't important or relevant for the climate, we hear. It's just the weather, the winds, and you should generally ignore the coldest continent.

That's a bizarre suggestion because both poles are equally important geographically and the Antarctica is the "real main representative" of a cold place on the Earth. In particular, the overall cold records were measured in the Antarctica, not the Arctic. I have no doubts that the relevant weather influences, the magnitude of weather variations, and the strength of the regions' interactions with the rest of the Earth's climate system (among other things) are different in the Antarctica and in the Arctic but what I resolutely refuse is the suggestion that one of these regions should be considered more important – just because it agrees with the "theme" popular among the global warming demagogues.

The climate alarmists love and depend on sloppy, premature explanations. So their first explanation of a warming trend seen somewhere is the first possible cause they conveniently consider, the carbon dioxide, and they want to burn the witches as soon as possible. If and when and whenever their story behind this causal relationship breaks down in a similar way as it breaks down in the Antarctica, they also adopt the first possible explanation they may think of: it must be the winds, the debate is over, you are obliged to shut your mouth immediately. (In a similar way, the cooling trend between the 1940s and the 1970s – that is being gradually eliminated by constant revisions of the weather history – must have been caused by aerosols and the story is immediately over, too.)

Needless to say, the actual reasons behind both types of phenomena may be different and only careful science, and not premature, ideologically biased, bullying screaming, has a chance to reliably find these actual reasons.

You also often read fog about the climate models' predictions of a growing ice in the Antarctica. There's surely no problem with the climate models and the growing ice is just due to some increasing precipitation or something like that. The climate models hired as prostitutes by the dirty and stinky global warming demagogues are "required" to obey two main conditions and obey two principal tasks: they must retrodict all the ordinary, innocent, chaotically changing weather for the past and for the present because we have already observed that the weather behaved like that and it lacked any kind of "moral imperative". At the same time, the same climate models are obliged to predict a very dangerous weather for the future.

As you might imagine, it's not an easy task, not even for the raped and fudged prostitutes that the prevailing climate models of the current era are. You can't really predict catastrophic things for the next 20 or 50 years if the previous 20 or 50 years were completely innocent and, except for a less than 0.5 °C change of the global mean temperature, trendless.

At any rate, there are some models and some basic facts about these models' predictions were deliberately kept in secret. One of them was whether they had predicted or they are predicting the gradual growth of the Antarctic sea ice that we have seen at least in the last 33 years. Finally, the truth was leaked. They didn't predict this sign of the trend. It's pretty clear that they are predicting a loss of the Antarctic sea ice, too. So at least for 50 percent of the poles, these climate model produce wrong predictions when it comes to the sign of the temperature trend. I say "at least" because even among the predictions whose sign or rough magnitude agree with the reality, the agreement may be just due to pure chance. 50% is a pretty high error rate which shows that you get equally "reliable" answers if you just throw dice as if you listen to the climate models.

As The Register rightfully says, the climate models simply can't be trusted if they have predicted a qualitatively wrong behavior at least for 50% of the cold regions. Make no doubts about it: the global warming demagogues will try to question even this elementary and unavoidable conclusions because their dishonesty knows no limits.

Thankfully, BBC was able to tell us that the insane sluts in the EU headquarters have abandoned their idea to demand ransom from the global airlines for their operations involving Europe – ransom justified by the carbon dioxide. At least, for one year, this hassle should be stopped.
Luboš Motl v 2:21 PM
Share