The Curiosity rover's SAM device, Sample Analysis at Mars, found something "Earth-shaking" and ready for "history books" in the Martian soil, according to John Rotzinger, the principal investigator of the whole rover mission.


So chances are that it is either some embarrassing elementary error or impurity or something close to this scene: 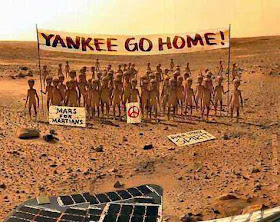 Note that not so much time ago, they wanted to claim the discovery of methane on Mars before it was shown to be methane from Florida. But truth to be told, I would personally refuse to be too excited about genuine methane on Mars, anyway. This fart of a gas is just way too far from life or even anything I would count as interesting organic chemistry. Of course, the speculators are betting that the mysterious finding is an organic compound because an earthworm, or a marsworm, could be too much to ask for.

However, there could be something close that would be still Earth-shaking, if not Mars-shaking, and remotely realistic at the same moment. For example, think of a [not necessarily bacterial] fossil proving Martian life in the past. I am not the first person who has written the F word in a relation to Mars (1996). Note that Curiosity is searching in a crater where the fossils could originate from the celestial body that hit the planet instead of being "domestic" Martian products.

We should hear what the secret details are on December 3rd, during a San Francisco meeting of the American Geophysical Union. I hope that if they realize that they have made a boo-boo, we will hear about it as well. ;-) Most likely, the NASA guy is creating hype before they inform us about a relatively modest discovery. 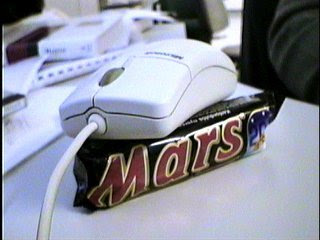 For example, they may have found a mouse on Mars.

Or they have found something that the local population doesn't want us to see.
Luboš Motl v 3:54 PM
Share