Some readers have asked me what I think about the updated ATLAS, CMS Higgs results that were released today. I would say that they are as un-new as possible. The details will be discussed momentarily.

But at the beginning, let's say that it's not shocking that we don't get any game-changing data when the amount of collisions included into the analysis less than doubles. When the dataset is doubled, the relative errors of measured quantities should decrease \(\sqrt{2}\) times, the statistical significances in sigmas should increase by the same factor, the exclusion levels should strengthen as well, and so on. But these changes are averages and when one is "unlucky", nothing changes at all. And inconclusive questions may stay inconclusive.

And that seems to be the case of the newest update, too. The possible discrepancies stayed inconclusive and in this sense, the today's update was as uninteresting as possible.


First, ATLAS reported a somewhat ambiguous result for the Higgs mass. The following picture is taken from Resonaances. 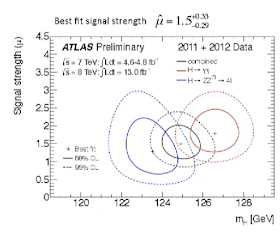 When the Higgs mass is measured from the God particle's ZZ decays, it seems to have the mass of \(123.5\GeV\). However, when the mass is evaluated from the diphoton events, it's \(126.5\GeV\). The difference between them is at the three-sigma level, so the inconsistency of this size or greater should only occur in 0.3% of cases.


I am utterly unimpressed by this inconsistency. The main reason is that the other detector, CMS, measures the Higgs mass in the ZZ channel as well and their value \(126\GeV\) or so agrees with the ATLAS' diphoton figure rather well. So some of the measured energies are most likely influenced by some error, some nonlinearity in the measured energy, especially the energy of the leptons, or something of the sort. Note that the calibration for ever greater energies is always a new task and the energy calibration for photons and energy calibration for charged leptons are two different tasks. Or maybe the lower ZZ Higgs mass figure is due to the new Swiss National Bank's unlimited interventions against the Swiss franc relatively to the French euro used as a payment tool in the rest of the collider. The error will ultimately be found, I predict. It's unlikely that the discrepancy is just due to bad luck.

You see that it's helpful that there are two detectors. This inconsistency is almost certainly unreal but if there were only one detector, it could do the same mistake as ATLAS because the relevant ATLAS people would simply control a larger group of experimenters. And we could have just one detector with one set of figures and masses – and in that case, the discrepancy would look much more serious and many of us would get excited by a deviation that those of us who live in the 2-detector universe know to be spurious.

On the other hand, I think that the separation to the two experiments is being overdone and overvalued, too. If the CMS folks were allowed to "audit" ATLAS in detail, I guess that the ATLAS' mistake – and in this case, it looks like the ATLAS' mistake – could be found. But maybe the CMS folks wouldn't be able to do so because they are used to the CMS detector and the two detectors are different in the technical details.

Of course, it's still possible that there are two nearby Higgses that divide their roles. An NMSSM realization of this scenario was proposed in July.

This is the last week of the \(8\TeV\) proton-proton collisions at the LHC. It means that the total accumulated luminosity is below the threshold \(30/{\rm fb}\). This threshold is important because I think it's included in our $100 vs $10,000 SUSY bet with Jester. I can't send him "his" $100 even after all the 2012 data are evaluated because the \(30/{\rm fb}\) goal will not have been reached yet. Unless SUSY-related discoveries are announced by Moriond in March 2013, we will have to wait to 2014 or 2015 for the first collisions at \(13\TeV\) and their evaluation before the bet is closed. And this is not just a formality. There are sensible scenarios in which SUSY could be discovered just after a few inverse femtobarns at the doubled energies. A gluino right above \(1\TeV\) could be visible almost instantly at \(13\TeV\) although it's very hard now, for example.
Luboš Motl v 9:15 PM
Share