I was told about a fun interview last night on the Czech Public TV Channel called ČT24 (a news channel of a sort). Click at the screenshot below to watch the 6-minute video: 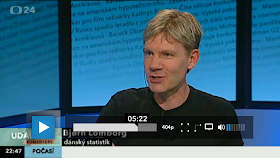 The host asks about the Kyoto protocol (extended through 2020 in Doha, but covering a minority of the CO2 emitters only; U.S., Canada, Japan, China, and others are out, only the EU etc. will suffer) and they exchange a few words about the reasons of failure of similar efforts. He says that there are more important things to solve, such as the genuine pollution in the air and water.

All these things may have been expected but there's one piece of information that could be viewed as novel – a bombshell of a sort.


They reveal that Lomborg isn't just visiting Prague for a few days: he's moved to our capital for an unspecified and not necessarily finite period of time (maybe until the next elections in Denmark only)! He described himself as a controversial person who has been assured a pleasant life by the right-wing Danish government but this government has been superseded by a less friendly left-wing one, so he became a sort of heretic again!

But more realistically, he wanted to live in Prague for quite some time, we learned. When the host suggested that he moved there in order to be closer to Václav Klaus who is also a skeptic (do you also think that our planet is blue?), Lomborg laughed. He shouldn't have laughed about one part of it because our planet is blue, believe it or not! :-) 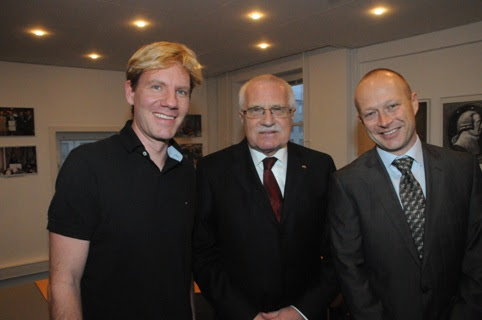 The female host was somewhat politically correct, repeating the things that sometime appear in the Czech media as well, like "don't you think that there's a close relationship between pollution and global warming?". But you may see that she doesn't really care about the topic and once she learns that Lomborg isn't your garden variety alarmist and she should adjust her expectations, she has no trouble to switch to similarly friendly questions reflecting the new knowledge about his opinions – because the Czech TV hosts are of course used to skeptics as well and these skeptics are treated as humans – and when they're experts on something, they're treated as experts. For example, her next question is about the importance of interpretations and misinterpretations of the statistics, a sort of a skeptical question. ;-) Lomborg confirms that even things like Sandy are being abused politically.

Time will tell whether the real-world life in Prague will be satisfactory enough for Lomborg. But already now, I am amused by the unusual idea of a political emigrant who moves from Denmark to my homeland.