European health commissioner Tonio Borg (Malta) – who has been in this job just for one month – is behind the latest insanely harsh EU proposals to fight against the smokers. See e.g. The Guardian. 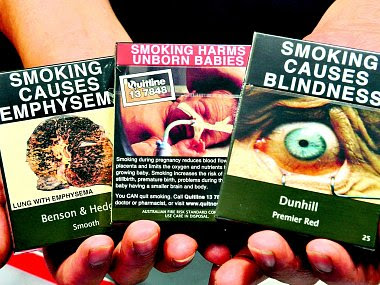 Horror-like pictures – such as the Australian graphics above – could become mandatory across the Old Continent. Flavored cigarettes – with menthol, vanilla, strawberries etc. – would also be banned, much like slim (and "natural" and "organic") cigarettes and much like packages with fewer than 20 cigarettes. That's no detail; for example, just slim and menthol cigarettes make 38% of cigarettes in Poland.


Also, it would be illegal to write "lite" at light brands of the cigarettes. In general, the firms' logos have to become almost invisible, too. Tobacco companies generally say it won't help, destroy the brands, and energize the black market.

I haven't smoked for 35 years and even before that, it was just half a breath after which I caughed ;-). But I still can't overlook that the justifications of these brutal policies are cherry-picked, indefensible, and just downright irrational. For example, Borg "justified" the flavor ban as follows:


The only problem is that menthol cigarettes aren't just tobacco. They're tobacco with menthol, a filter, and other things. Because the assumption of the proposition above isn't satisfied, the proposition is irrelevant for the real world. Well, if you look carefully, you will see that Borg's proposition is, to the extent that it is right, just a tautology. The truly valid underlying comment would be


You may consider this sentence to be an operational definition of tobacco or, in Bill Clinton's jargon, you may view this sentence as a definition of is, too. (You just have to add "If it smokes like tobacco and if it blows like tobacco" among the conditions, too.) Try to look at a different, analogous situation – a proposed law forcing the EU commissioners to look as what they are:


If it is an asshole, it should look, smell, and taste like an asshole.


The problem with the relevance of this proposition is that people such as Tomio Borg are not just the A-words. They are also trying to be politicians at the same moment. They're some bound states of various properties and entities, a compromise in between them. In fact, if we were lucky, the EU commissioners could resemble politicians more than the A-word in the future.

Quite generally, the philosophy behind all these bans is the desire to ban everything related to tobacco with no exceptions. That's why the policy tries to make it illegal to "bind" cigarettes with other things such as flavors, brands, types, selection, and so on. And that's why it wants to allow negative pictures only.

But the exclusively negative pictures completely misrepresent the actual balance of changes that the cigarettes bring to the smokers. Smokers usually smoke for very good reasons. They feel more free, relaxed, elegant, in charge of themselves. Most of the smokers just live the taste and flavor. To some extent, smoking even brings them some satisfaction as a form of a protest.

There are several motivations of this kind and be sure that the potential new smokers will learn about them whether or not the society hypocritically tries to turn these "positive words on smoking" into taboos. Such attempts to reduce the availability of the information to the youth is utterly naive.

Almost everyone knows that smoking probably reduces the life expectancy by several years. No one knows the exact figure. It's not enough to calculate the average age-at-death of smokers and non-smokers in a country because the actual difference between these two averages may be due to a completely different reason (a more genetic or socioeconomic one) that just happens to be systematically correlated with the smoking rate (note that correlation isn't causation; instead, both correlated quantities are likely to be effects of some common cause, a "third player").

If you order nations according to their life expectancy and their smoking rate, you will find out that there's no significant correlation between the percentage of smokers and the average life expectancy.

But even if everyone knew that smoking subtracted 5 or 10 years out of the average lifetime, and almost everyone believes it, anyway, most smokers would smoke nevertheless. Their cost-and-benefit analysis simply has some arguments on the opposite side as well and those often win.

I find the cigarette smoke somewhat annoying – and I also find it a bit annoying when it gets absorbed by clothes and survives. But it hasn't been a catastrophe for quite some time. There are other comparable annoyances and many greater annoyances. As a non-smoker, I actually find the horrifying graphics showing the diseases etc. to be more annoying than the cigarette smoke itself. One only walks around a newsstand, looks at some journals, and has to look at some of these vomit-making images? Why? What have I done to anyone?

Almost all smokers will decide to smoke, anyway. In addition to that, we will have some little kids scared by gloomy images at the tobacco shops, something they shouldn't have seen and, I think, something they have the right not to see.

Czech psychologists mostly believe that the logic behind the bans is crackpottery. For example, child psychiatrist Petr Pöthe thinks that the horrifying graphics won't repel teenagers. Their effect may actually be the opposite one:


Kids are not behaving as stupidly as adults often want to believe. Kids are thinking and they often have far more information at their disposal than the adults do. They are deciding according to various role models and attitudes. Something that is dangerous is, on the contrary, attractive for them. Health or their appearance in 15 years is something they don't care about at all.


This description wouldn't ever apply to me but I am confident that it's the right analysis of those typical teenagers who naturally become smokers. Dr Eva Králíková, a physician fighting tobacco addiction, disagrees and thinks that the graphic images may work.

Petr Pöthe above ultimately turns out to be a potential anti-smoking radical:


I doubt that we could measure in the lab that the kid is deciding according to the picture. Life works differently.

Primarily, we should struggle to be authentic. If we're saying it's a poison, it shouldn't be sold at all. It's wrong to sell something, get money from it, and to say that it's a poison at the same moment. This is an inconsistency that reduces the adult authorities' credibility among teenagers who may end up believing nothing that the adults say.


Dr Eva Králíková adds that a ban could be fine but it's impossible to ban something that a big portion of the population is addicted to. She outlines a decades-long struggle to eliminate smoking from the society.

I don't see much evidence that this is a realistic goal or a sensible expectation about a foreseeable future. And even if this goal could be achieved, I am afraid that it would be just one symptom of a highly manipulative, non-free society that may be under construction today. Sorry, I prefer a freer society with dozens of percent of smokers. 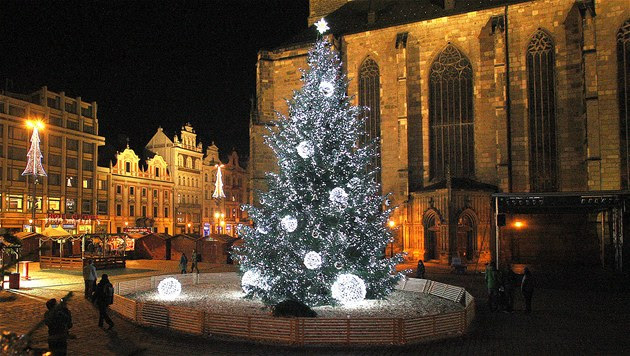 The prettiest public Christmas tree is one that decorates... of course, the royal town of Pilsen, Czech iDNES readers decided in a poll. Congratulations to us and Merry Christmas to you! :-)
Luboš Motl v 9:25 AM
Share