An unusually well written article appeared in the financial section of the Czech Press Agency's server. Here's the translation into Lumo English. 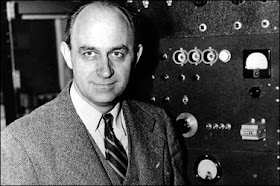 Chicago/Prague – Exactly seven decades ago, on December 2nd, 1942, the mankind found itself on the threshold of the nuclear era. A team led by Italian physicist Enrico Fermi managed to ignite a controlled nuclear reaction for the first time in the history. The experiment opened doors towards the usage of the mysterious energy from the cores of atoms which is able to both kill and help.


Although Fermi belonged among the key minds of the U.S. Manhattan Project whose goal was to develop a nuclear warhead during the war, the place where the test took place wasn't a nuclear facility. Instead, the experimental reactor was constructed in the basement beneath the unused terraces of Stagg Field, a sport stadium in Chicago.

The equipment built by the team of Fermi's collaborators for several months was aimed to practically verify the possibility of a controlled fission chain reaction which was suggested by Fermi's colleague Leó Szilárd. It was composed of numerous graphite blocks into which uranium capsules were inserted. Cadmium-coated bars were dragged through the spaces in between the blocks and their sliding in and out was supposed to control the reaction intensity according to the experimenters' will. The whole 450-ton "atomic charcoal miln" was covered by wooden boards. Together with the bars, these were the only two safety arrangements.

Although the risks linked to the experiments were significant, 49 brave people gathered in front of the reactor on December 2nd. Young scientist George Weil was assigned an important role in this exercise. According to Fermi's instructions, he slowly began to remove bars from the reactor while others were breathlessly standing on an elevated podium.

Just like the physicists expected, the neutron activity grew every time the bars were sliding out. Once the fission chain reaction was in reach and the tension in the room could have been cut like a loaf of bread, Fermi astonished everyone who was present. In a calm voice, he declared a lunch break.

Painting via Gary Sheehan, Atomic Energy Commission, and Technet.Idnes.CZ. The three men behind the reactors have readied jerricans with cadmium, as Bill Zajc correctly recalled.

When the physicists ate the lunch together, the experiment could continue. The clocks were showing 3:25 pm when the accelerating ticks of the detectors changed to an uninterrupted sound. The reactor entered the critical state for the first time.

About half an hour later, Fermi ordered Weil to insert the regulating bars and stop the reaction. The viewers felt a feeling composed of relief and happiness. Someone managed to find a wine bottle and paper cups. Those who remember say that the room was as silent as a cemetery because everyone was aware of the importance of the moment.

Army officials were informed about the successful experiment by phone. To protect the information against eavesdropping, both sides had to exploit a curious code in their speech. "An Italian voyager landed in the New World," the basement of the Chicago stadium reported. "How did the aborigines react?" chemist James Conant was worried on the other side of the line. The answer was reassuring: "They were very friendly."

Fermi's experiment opened the door to subsequent developments that took place on two very different paths. The first path led to the construction to a nuclear warhead that was ignited in a New Mexico desert in July 1945 for the first time. A month later, inhabitants of Japan's Hiroshima could testify that the weapon was rather efficient.

A more friendly among the two "Janusian faces" of the energy from the cores of atoms is displayed in nuclear power plants. The first nuclear reactor that was actually producing electricity was started shortly before Christmas 1961 in the U.S. state of Idaho. Its power was so small, however, that it only covered its own energy needs. The first "nuke" power plant was connected to the grid in Summer 1954 – in the USSR.
Luboš Motl v 11:11 AM
Share