Last man on the Moon: 40 years ago

Some technologies such as the communication technologies have experienced unbelievable progress which seems to be continuing.

But there are some technological challenges in which the mankind has apparently become weaker. We may argue hundreds of times that it's silly and unscientific to send the humans into the outer space. But aren't you worried that we may have grown unable – or unwilling so that it's effectively equivalent to unable – to send the people to the Moon? Isn't it obvious that such a fading potency affects more useful dreams as well? 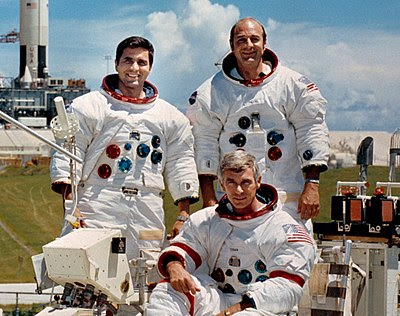 In total, 12 Americans have walked on the Moon – and no one else. The last folks walking on the Moon went there with the Apollo 17 mission that was launched on December 7th, 1972, i.e. fourty years ago. It's a pretty long time ago, isn't it? I wasn't born yet. In twelve days, it landed back on Earth.


The Apollo 17 crew consisted of Commander Eugene Čerňan and pilots (of two different kinds) Ronald Evans and (global warming skeptic) Harrison Schmitt. Schmitt has been the last man who arrived to the Moon; Čerňan was the last man walking on the Moon in general.

As you may have noticed, I am writing Čerňan [translated as a "Blackie" of a sort] with the Czechoslovak diacritical signs. He brought the first Czechoslovak flag to the Moon. He didn't forget to bring the flag back to Earth so it's located in a Czech observatory these days. On the other hand, he did forget his camera on the Moon. ;-)

His father was originally Slovak and his mother was Czech. Interestingly enough, Vladimír Remek, the world's first non-Soviet non-American astronaut, also had a Slovak father and a Czech mother.

In a hybrid jargon, both of them were "hinnies". That's somewhat peculiar because the stereotypical couples – especially in TV News – consisted of Czech males and Slovak females so they could give rise to "mules" rather than "hinnies". But as you can see, "hinnies" are more genetically ready to become astronauts. :-)

I think it would be good if the Moon – and perhaps Mars and Mercury whose poles could actually be more life-friendly than Mars – had some base that would make those places more controllable, at least as tools to communicate with/via the planets and moons and, perhaps later, to use them for transfer flights or even to mine natural resources. Much of it is the music of a distant future but I do feel that we're getting further from such goals, not closer to them. Of course, Cernan is also annoyed by the faded prestige of NASA. Incidentally, he opened a Czech community center in Chicagoland a few weeks ago.

Golden Spike, a company in Colorado, plans to make routine flights to the Moon. You just pay a symbolic amount of $1.4 billion and a round-trip ticket is yours. I have certain doubts whether they will manage to fulfill these commitments anytime soon – and whether they will find some passengers at all even if they're successful – but I would love to be proved wrong.
Luboš Motl v 10:11 PM
Share