Tonight, I skipped another (3-hour) catastrophic movie on TV, Flood (2007). Some skeptics are writing lots of e-mails about a silly study that says that the sea level rise proves man-made global warming – without a glimpse of evidence supporting the attribution. It apparently has some impact in the U.S.

I am already way too bored by this junk. People who keep on writing this stuff are inferior inkspillers and one of the goals of my writing about the climate in recent years has been to convince sensible people that they should pay no attention to these liars and idiots. So it would be hypocritical – and a sort of masochism at the same time – if I were reading much of the alarmist garbage that is being published.

Via NOAA. Battery, NY is named after artillery batteries that use to stand there to protect the settlers from David Cameron's predecessors. If you think the trend is only this straight in New York, try Boston, San Francisco, Seattle, and London.

But concerning sea level rise, I want to say one thing. It is a great benchmark to estimate the rate of something that could be called the global mean temperature – a better method than the manual averaging of weather stations or satellites. The main reason why I say such a thing is that unlike the graphs of the global mean temperature reconstructed from weather stations or satellites, the graphs of the sea level rise are unbelievably straight. And you don't need to measure the sea level at lots of places in the whole world. One place, e.g. Southwest of Manhattan – see the graph above – is enough.


Compare the sea level graph with some typical graph of global mean temperatures over a similar period: 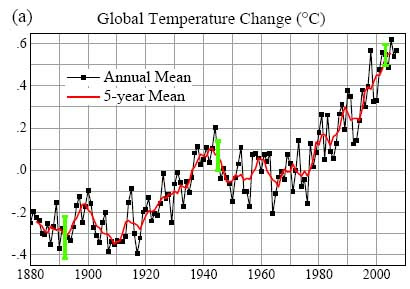 I think you must agree that the sea-level graph may be classified as a straight line with some nearly white noise added while the global mean temperature graph is much further from such a description: the global mean temperature graphs resemble random walks whose "trends" are changing all the time. Well, I am sure that you may demonstrate the visually obvious point quantitatively, too.

The Battery, NY sea level graph is constructed so that the average seasonal cycle – a rather simply calculable function of time that only depends on astronomy – is subtracted. What is left is a remarkably straight line despite the fact that the difference between the (two) maxima and (two) minima of sea level on a given day in Battery, NY is almost 2 meters and we need to isolate millimeters every year. It's so straight that NOAA has calculated the rate of the sea level rise as\[

\] The relative error is just 3%. Quite amazing: the error of the known temperature increase in the last 100 years exceeds 10%. When you see how straight the graph is and how the rate hasn't visibly changed in the last 100 years, you must also agree that it's very hard to imagine that the sea level rise in the next 100 years will be too far from these 27.7 centimeters. Every sensible person knows that 27.7 centimeters per century is negligible for practical purposes. It makes no sense to be afraid of a sea level that 27.7 centimeters higher in 2112 than it is today.

I think that the sea nicely averages the heat at many places of the globe. Well, let's admit that the sea level graph is smoother also because the oceans have a significant "inertia" – well, I mean heat capacity. But it doesn't matter. The inertia is just doing something like 5-year or 10-year running averages of an underlying trend that could be more bumpy. But it's still true that the sea level in Battery, NY shows nothing like the global cooling between the 1940s and the 1970s. The sea level was rising rather uniformly (linearly) throughout the last 120 years or so, independently of CO2 production, aerosol emissions, and other things. The linear shape of the graph is a strong piece of evidence that the sea level rise isn't (mostly) caused by the bumpy (and exponentially increasing: the CO2 emissions increase e times every 57 years) human activity.

Despite the widespread hype about melting, most of the trend above is actually caused by thermal expansion of the ocean. (Melting accounts for 20% or so.)

On the graph above, you see that the density of water is actually minimized at approximately 4 °C (Howard W. is telling me that the salty seawater has the minimum elsewhere, actually at –2 °C). Water expands if you cool it or warm it from this particular temperature. At reasonable "room temperatures" (or the ocean temperature in a large majority of the globe), the coefficient of thermal expansion is something like 0.025% per Celsius degree. So if the ocean temperature increased by 0.5 °C in a century (probably a bit less than that because the oceans were warming less quickly than the land), you may see that the "height of water" should have increased by something like 0.01% in the last century.

Because we know that the actual rise was about 30 centimeters, we may estimate the relevant part of the ocean that was heating up and expanding. 30 centimeters is 0.01% of how much? Well, we get 3 kilometers. It's surely a thicker layer of the ocean surface than what is usually considered as the "circulating part of the ocean" capable of storing heat. But there are different effective descriptions at different time scales. If you consider longer time scales, like 20 years instead of 5 years, deeper layers of the world ocean become relevant.

It's remotely conceivable that the melting of glaciers and ice sheets in the Greenland or Antarctica could become more important in the future and the trend may start to change quite suddenly. But the impressive constancy of the sea level trend in Battery, NY – and any place that measures it as well as the Newyorkers do (there aren't too many places like that) – is a strong indication that such a melting contribution (and, independently of that, the human contribution) hasn't started to be important yet. Could we please postpone all the climate worries to the moment when the sea level rise trend (measured at least from a decade of data) increases at least to 50 centimeters per century? The data available so far indicate that we haven't changed an iota about the natural trends yet and the continuing expansion of the New York City is a strong hint that 27.7 centimeters per century is just fine from all points of view.

Do you believe that this video via Peter F. is legit?

ALL IS IN ORDER from Science News on Vimeo.

He's better than you and me, isn't he? The official caption says: After touching the white circle to start a round, Ayumu breezily reconstructs the order of briefly flashed numbers. Credit: T. Matsuzawa, Primate Research Institute
Luboš Motl v 9:16 PM
Share