A projection of future drought one can't believe

Rob Wile of Business Insider discussed a climate survey prepared by the U.S. Commerce Department (with some well-known alarmists in the team of authors). Among other things, he reprinted Figure 2.21 from that draft paper: 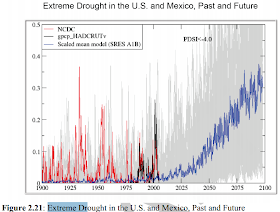 It shows that the percentage of the territory of the United States and Mexico that will experience drought will suddenly take off and reach something like 0.3 if not more than 0.5 by 2100 even though the recent values are close to 0.01-0.02 or so. Just look at the picture and think about it. Is it a plausible outcome of viable models of the climate?


I have picked a very particular, tangible example but similar projections are everywhere and all of them are equally absurd.

You see that the graph (just like many other similar graphs) may be divided into two parts: the past prior to 2013 where the observed reality of drought is known, it is unspectacular and more or less unchanging, and models are in trouble if they retrodict or "predict" something dramatically different from the initial conditions in the distant past.

The other part is the future. No one knows "for sure" what percentage of Northern America will experience drought so allowed speculations are almost unrestricted and tens of thousands of people literally make their living out of exploiting this apparent "freedom".

We see that they claim to have models that agree that the areas facing drought always covered one or two percent of the territory in average (over some time or over ensembles of similar virtual worlds). And the same models are claimed to imply that in every decade starting from now, the percentage experiencing drought will jump by 5 percentage points or so.

Is that possible? You see that the year 2013 – roughly speaking – represents a discontinuity in the first derivative of the blue line. The line is continuous but its slope is pretty much zero before 2013 but significantly increasing afterwords, especially after 2025. Why it's always the present that displays such a discontinuity?

The model would have to contain some "mechanism" that can calculate the date of the present, 2013. Something has to be special about the years 2013-2025 or so. Something that was negligible in all the previous decades before 2013 must suddenly become very important after 2013. Can this be the case?

One can't "rigorously rule it out". There may be a "tipping point". But in the absence of a solid argument that something like that exists, a sensible person simply has to conclude that such a qualitative change of the behavior of the climate exactly in the year 2013 (or even in the coming decade) is wildly unlikely. A common-sense evaluation of the experience and observations throughout the 20th century (and some data we know about arbitrarily earlier epochs) is simply more robust than some speculative models that were engineered for a given purpose and that almost universally disagree at least with some important properties of the climate we have learned from observations in the past.

The Earth is 4.7 billion years old and there's quite some evidence that the weather in the recent million of years, to say the least, only included variations and cycles of a kind we may imagine, a kind similar to what we know: the Milankovitch-cycle-driven ice ages are the only new feature we must add relatively to the behavior we know from our real lives or credible stories reported by other folks. So why should exactly the years 2013-2025 be the exceptions among the millions or billions of years? The probability of that is clearly one part in a million or a one part in a billion or something of this type.

The trend of the global temperature increase averaged over a 30-year window has been pretty much the same what it is today at least for 100 years (and arguably during a significant fraction not too far from 1/2 of the Earth's geological history, too). Even the CO2 emissions (which almost certainly may influence the climate through their effect on the global mean temperature only – and this influence is very, very weak) have been pretty much equal to their current magnitude for many decades, let's say 30-40 years, depending on what you mean by "pretty much equal".

So how can the predicted "mean extreme drought" (the blue curve) be 10 times greater in 2050 than today even though, for example, the CO2 concentrations will be just 70 ppm above their current levels (we have already increased CO2 by more than 110 ppm relatively to the pre-industrial years) and the temperatures won't be more than 1 °C different from the present ones even according to the crazily oversensitive IPCC models (just like the widely believed temperature increase over the 20th century)?

It makes no sense. Models that may predict these previously unseen, sudden "huge reactions" to "small changes" of the parameters must either directly contradict the actual observed conditions prior to 2013 or they must contain wildly unsmooth or discontinuous functions or they must depend on special, targeted adjustments or new effects that start to become important after 2013. Most likely, the models have to suffer from several of these problems at the same moment. One would be enough to be forced to abandon the model.

Both of the last two features are highly unnatural – and for this reason, we must say that they are extremely unlikely. If a model predicts the mean area suffering from extreme drought to be below 3% (to be somewhat safe) at every moment before 2013, it's clearly unlikely that assuming that the model is natural and physically plausible, it will predict an above 10% figure at every moment after 2060. These two properties just don't add up. There is absolutely nothing special about the global mean temperature 16 °C relatively to 14 °C or 15 °C. There is nothing special about 450 ppm of CO2 relatively to 395 ppm or 300 ppm. The next "special points" that may be justified are near 100 °C when water boils or 20,000 ppm of CO2 when animals start to feel dizzy because of the increased CO2 concentration. But whether we have 390 °C or 450 °C can make no qualitative difference.

Even if some quantity such as "area plagued by severe drought" in the U.S. depended on a tipping point whose location isn't quite known, the precise timing of such points would almost certainly depend on the question you ask (drought in the U.S.; sudden melting of the Greenland; sudden melting of the Himalayan glaciers, and so on). It's virtually impossible that all these things would start to behave "dramatically" and "very differently" exactly sometime in the 21st century. Or in the next 10 years, if you want to talk about even more contrived claims.

The idea that the present is "this special" and we are surely entering "the era of doom" is religious in character.

Every person who wants to believe some nonsensical miracles and judgment days must believe that the present is kind of special. It is a critical point. Why? The past must be "ordinary" and mostly obeying the laws of physics because people have witnessed that this has been the case although most of them can't understand their observations at the physics level of rigor and accuracy.

At the same moment, the future must bring something new, miraculous, remarkable for the faith instincts of these folks (or for their propagandist goals) to be satisfied. It doesn't obey the effective laws of physics we may reconstruct from the past events. The transition point between the past and the future, i.e. the present, is therefore a crossover point when the usual laws of physics cease to hold. That's why Jehovah's Witnesses could have repeatedly claimed that the second coming of Jesus Christ was imminent. They were just postponing the deadlines when their older deadlines didn't work. When they have done so 10 times or so, they became a bit more careful.

The climate alarmists are crackpots of a closely related type as Jehovah's Witnesses. However, they lack the hindsight, experience, and the related relative wisdom of the Jehovah's Witnesses. They have only postponed the date for the "doom" two or three times which seems OK to them so these bigots still feel self-confident about their crackpot prophesies of climate problems. Or maybe they know that their position is indefensible but they still find a sufficient amount of gullible listeners who are ready to buy their stuff.

But rationally thinking people know that these things are indefensible even after the judgment day was postponed "just" 2 or 3 days. They were arguably indefensible even before the first major failed prediction.

There is absolutely no reason independent on prejudices to think that climate problems will become qualitatively more important in the next 100 years than they have been in the past. When you trace the justifications behind the claims to the contrary, you will find out that in every single individual case, the alarmists reached this conclusion because they assumed it from the very beginning. They wanted to find out some details about the climate Armageddon in the next 100 years so they did. They didn't have the freedom to even question whether the idea of a climate problem in the 21st century holds water. It would be a blasphemy. Whole institutions were built within the limits of the enforced belief in the basic wisdom of the doom and the members are only allowed to study the details of the doom. Some individual members of these institutions may have perhaps reached the catastrophic conclusions "honestly" but it doesn't make things any better because the people doing the particular mistakes needed for this conclusion were politically cherry-picked because they were convenient. So despite one or two honest members in the IPCC, it's still true that the institution reached its conclusions dishonestly.

That's the main reason why the climate alarmists are deluded religious crackpots, not rational people who may be sensibly talked to. Their main methodology isn't an impartial and precise evaluation of the empirical evidence; their main methodology is the search for hints that are compatible with their own preconceived belief in the judgment day.
Luboš Motl v 8:11 AM
Share