Growing Moon near the horizon and binocular vision

When you see the Moon near the horizon, it appears larger than when the Moon floats somewhere in the middle of the sky.

If you haven't joined the club of witnesses of this optical illusion, you're a rare exception and you're invited to try to explain the illusion as seen by the humans whose vision is not as objective as yours. ;-)

Needless to say, the actual angular size of the Moon – and the size of the spot on your retina – is the same regardless of our satellite's distance from the horizon (although both fluctuate roughly by 10% due to the eccentricity of the Moon's orbit). The usual explanation is that the optical illusion is a variation of the Ebbinghaus illusion.


The Ebbinghaus illusion is what makes you think that the left orange is smaller than the right orange on the picture below: 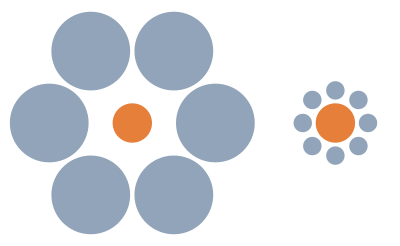 Do you agree? Remarkably enough, their sizes are equal (check it by a piece of paper!). The left orange looks smaller because you are automatically comparing it with the surrounding large blue disks so the left orange is smaller relatively to objects around it which is why the brain misinterprets this comparison as the Moon's being smaller in the absolute sense. The opposite comment applies to the right orange – among dwarfs, almost everyone is a giant.

The Physics arXiv Blog discusses a paper by Antonides and Kubota that disagrees with this explanation. Instead, it proposes a similar interpretative explanation that depends on our having two eyes – and probably the stereoscopic vision.

They say that the explanation at the beginning of this article is unlikely to work because the reported effect is usually too large (while it's relatively smaller in the case of the Ebbinghaus picture above). Moreover, the effect disappears on the photographs, they emphasize.

Let me tell you something. I don't believe that stereoscopic vision is in any way necessary for the optical illusion of a "large Moon near the horizon". Clearly, no one can stereoscopically distinguish the distance 380,000 kilometers from infinity. Even the distance 5 kilometers on a typical horizon is indistinguishable from infinity. Both eyes are looking in directions that are totally indistinguishable from two parallel directions in practice. The brain may be "thinking" about the distances it would calculate from the binocular vision but all the actual results for the Moon's distance (and the distant houses' distance) are infinity regardless of Moon's size – which means that the binocular vision plays at most a trivial role.

An explanation I offer to you doesn't depend on binocular vision but it differs from the Ebbinghaus illusion, too. But I don't claim I am the first one who formulated it. It's likely that I have heard it somewhere in the very form mentioned below.

What we actually mean when we say that the Moon looks larger is that the brain determines that the "absolute size of the Moon" – and not the angular size – is larger when the Moon is near the horizon. Now, you may protest that the absolute radius of the Moon is always 1737.5 kilometers, regardless of its orientation relatively to the Earth and your town.

I think that our brains never think of the distances as being infinite. In fact, they don't even think about the unimaginably long distances such as 380,000 km. Instead, they try to imagine that the distance of the Moon from the Earth is the minimum possible distance that doesn't contradict any observations that the eyes and brains are "forced to see".

When the Moon is in the middle of the sky, above your head, there is nothing to compare the Moon with so your brain instinctively thinks that the Moon is rather close, perhaps 1 kilometer (which already looks like infinity, whether or not you use stereoscopic vision, focusing of your lenses, or any other method). So your brain estimates that the Moon's radius is about 4 meters (you don't say it loudly but your brain thinks that it's a 4-meter white ball flying above the fields, doesn't it?). Note that 4 meters is smaller than the right answer 1,700 kilometers by the same factor by which the actual distance 380,000 km was reduced to 1 km.

However, when you see the Moon next to buildings that are 5 kilometers from you, the brain decides that the Moon can't possibly be closer than the buildings (especially if the Moon is partly behind them), so you subconsciously "expand your idea about the size of the Universe" and decide that the Moon is a ball of radius at least 20 meters (at the distance of 5 kilometers or so from you). A 40-meter ball looks larger than an 8-meter ball and that could explain the effect.

This explanation predicts that the perceived size of the Moon should depend on the absolute distance of the "objects at the horizon" from you, i.e. on the apparent distance to the horizon. Yes, I am also afraid that this prediction will fail but I still have the courage to offer this possibly wrong explanation. ;-)

Would you say that my explanation is inequivalent to the Ebbinghaus one?
Luboš Motl v 8:06 PM
Share