A few days ago, I wanted to write about a new paper


Recent Developments in HiggsBounds and a Preview of HiggsSignals (PDF)


by Philip Bechtle and 6 co-authors. I decided there had been too many articles about SUSY fits on this blog. However, even an enemy of SUSY named Tommaso Dorigo positively mentioned that paper so I decided a comment should be here, too.

They discuss games with (similar authors') publicly available program HiggsBounds and its various versions (3.8.0 and 4.0.0) which unifies the constraints from LEP, Tevatron, and LHC experiments. Feel free to click at the link in the previous sentence and try to play with the web-based user interface to this software. Or download the source.


They are currently developing a new program, HiggsSignals, which is not yet available. However, they have already used it to optimize the values of parameters in the Minimal Supersymmetric Standard Model (MSSM) given the experimental constraints. 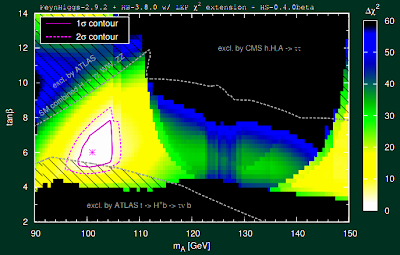 In my (reverted) color conventions, the white area is the most preferred one because it has the lowest value of \(\chi^2\), something that counts the "total error" of all the predictions in the most natural way (in units of the standards deviations, and added in quadrature from all sources: see my intro to chi-squared distributions). Because of a transparent color, the diagonal lines indicating exclusion – both above and beneath the grey dashed lines – have disappeared. I apologize but you may figure out what the picture says, anyway.

You see that the optimum point is one that predicts that the observed Higgs boson at \(126\GeV\) is the heavier one among the CP-even neutral bosons (note that minimal SUSY predicts that God has five faces). And the lighter one has mass about \(100\GeV\). This doesn't contradict the LEP exclusions because this lighter Higgs boson has reduced couplings to the Z-bosons.

The best point has \(\chi^2\approx 29.3\) which is pretty much what you expect for \(32\) degrees of freedom – well, the average \(\chi^2\) would be \(32\) itself. There's really pretty much no fine-tuning at that point – nothing contrived to be found here. In fact, the predictions look a bit more accurate than what you expect from a correct model by chance in average. ;-) You may see on the picture that this point predicts the CP-odd Higgs mass to be \(m_A\approx 101\GeV\) and it is said to predict the masses of the charged Higgs bosons \(m_{H^\pm}\sim 126\GeV\) which are almost degenerate with the Higgs boson we already know. And the lighter CP-even neutral Higgs boson has \(m_h\approx 92.3\GeV\).

If it is true, discoveries of new particles are guaranteed in the new run of the LHC, I think.

Personally, I find the very scenario that the first discovered Higgs boson is actually the heavier one to be clever and comical. If it is true, it is another example of Nature's immense sense of humor and our tendency to only study "the most likely scenario" even though the "second or third most likely scenario" often turns out more sensible and, ultimately, true. (Note that the number of generations is three, not one which would be more minimal. Also, the electroweak gauge group has an extra \(U(1)_Y\) which could also look like a deviation from minimality. And so on.) We often make too mechanistic assumptions about the hierarchies and inequalities between particle masses – we often think that the ranking is known even before any experiment. In this way, we often miss whole interesting chunks of the space of theories and this fact often implies that we're shown wrong.

However, we're also learning about this defect of ours, at least in some cases. So people face no psychological problems anymore when they try to understand that the superpartners (squarks) of the heavier quarks are likely to be lighter and that the third generation neutrino may also be closer to the lighter mass eigenstate than the first generation neutrino. These were just two examples of "counterintuitive hierarchies". The "lighter but later discovered" Higgs boson could be a magnificent new example if it were true.

A related point is that we see that there are still many scenarios in which new, so far undiscovered particles are very light. For example, all the new Higgses predicted by SUSY may be lighter than the Higgs boson we know.
Luboš Motl v 6:24 PM
Share