Theory of something: QM has reached limits

Several people have asked me about the following press release that was published a few days ago and that was reprinted at various servers such as one that belongs to San Francisco Chronicle:


Theory of Something Reveals Why Quantum Mechanics has Reached its Limits: Mass is Outside of Particles (press release)


We learn that quantum mechanics has been defeated. More colorfully, the mass is located in a grid outside particles that is 100,000 times larger than the particle itself. A proton has a core with 63 "negtrinos", electron has 9 of them, and the hydrogen atom has a "grid room" for 16,525 "negtrinos".


The sidebar contains lots of amazing statements such as "all forces are electromagnetical", "\(F=ma\) has been finally derived", "neutrinos and negtrinos are in the grid and fill the space", and so on. Lots of infantile pictures are added. All big problems are claimed to be solved (dark energy is everywhere, too) although there is no evidence on that page that the author has understood what the problems actually are or, at least, how they're called.

But let's reproduce the following image: 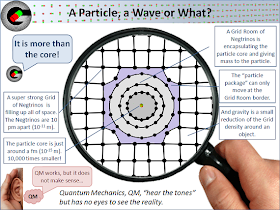 Now, I must ask all the people who were intrigued by this stuff: Can't you just figure out that this is pure childish rubbish that someone has made up? If you can't, you just fail to understand science and Nature at the high school level. It's scary.

The same question may be asked in millions of other contexts in which various types of pure junk are being hyped. For example, there's a YouTube video (with 300,000+ views) promoting Keshe's Foundation's alleged "discovery" of a method to obtain unlimited free energy and the cure for any disease out of a plasma. Someone asked whether it was a legitimate science and I gave a long answer. Guess whether the answer was YES or NO. Needless to say, a wishful thinking is a big part of this belief. Genuinely sincere and genuinely ignorant people just want the future to be rosy, they want to be a part of it, and they're not capable or they're not willing to distinguish the actual evidence (or at least common sense) from their wishful thinking.

In this "model", particles resemble a tennis racket with an extra disk-shaped structure of concentric circles decorated by extra "grid points" in the middle. Could a sane person believe that Nature works in this way?

First of all, the plane of the tennis racket is really two-dimensional while objects in the real world are three-dimensional. Why would Nature confine Herself into two dimensions and wouldn't use the third dimension at all?

Now, look at the complicated pattern. Could it arise naturally? Why? Why don't you draw another grid, a hexagon grid with three holes, each containing a pair of concentric elephants? This is not just a satirical rhetorical question; I am totally serious about this question. If Nature allowed the "tennis racket" particles, it would have to allow "elephant triplets in honeycomb" as well. If it didn't allow it, what laws could possible justify that "tennis rackets" are allowed but "elephant triplets in honeycomb" are not?

In other words, can't you see that the pattern on the picture is hugely contrived, self-evidently man-made? Nature isn't man-made. The laws of physics that dictate the shape of patterns are natural mathematical laws. Why would they produce something so similar to complicated man-made objects such as modified "tennis rackets"? It's clearly preposterous, isn't it?

Such pictures must be attractive for the laymen because they are "very concrete" and the particles have been "visualized". The pattern has lots of features you may spent lots of time with and memorize, thus convincing yourself that you are thinking about a scientific model. At the intuitive level, people may like it. But people, it's exactly the opposite what one should expect when it comes to a description of Nature. A true description of Nature isn't necessarily easy to be visualized. However, what's even more obvious is that it doesn't contain (almost) any arbitrary features that would have to be memorized.

You see that I am alluding to some activities that many people may have liked – or been good at – at school. They liked drawing and pointing and they liked to memorize things. But haven't you understood that these are skills that are not excessively important to understand Nature? Haven't you seen that physics works differently?

Nature simply has reasons explaining why the things are the way they are and they're often reasons that may only be accurately formulated in the language of mathematics. The picture of the "tennis racket" is exactly opposite in character. Its whole glory is about tons of features that don't have any justification.

It's sort of annoying that most of the people can't identify nonsense – "theories" that would look preposterous even to semi-intelligent people 2,000 years ago. But the situation is probably even worse because even a large number of people who have college degrees; and perhaps a majority of the journalists or even science journalists is constantly ready to buy (and resell) any piece of crap even though a reasonably rational person may see it is crap by looking at 1 or 2 sentences or 1/4 of a picture.

I have no idea whether this lack of ability to see that self-evident nonsense is nonsense is due to the people's intrinsic limitations and low intelligence or their life-long "revolt" against the physics teachers who were intimidating them at school or some mistakes in the education that could be fixed or due to the atmosphere in which people are taught to believe everything and anything that is written anywhere in the media or press releases despite the fact that much if not most of things that are written at similar places these days are garbage.

It would be nice to know the actual reasons but it would be even nicer if people weren't this staggeringly gullible or this unbelievably stupid.