Two years ago, a random guy in a random discussion has pointed out that the U.S. laws have a bizarre loophole. One may circumvent the debt ceiling by printing a trillion-dollar coin out of platinum and donating it to the treasury. 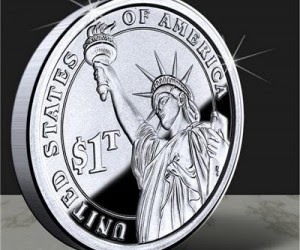 I think that the laws are really silly if it matters whether the money is printed in the form of many $100 banknotes or a somewhat smaller number of $1,000,000,000,000 coins. What should matter is the total debt. However, the Treasury Department may apparently mint commemorative coins and their value isn't restricted.

Let's not get to the legal details. Someone has simply screwed it up and even though no one has found the loophole that may be abused before 2011, the Treasury Department is apparently allowed to print an arbitrary amount of money regardless of the debt ceiling as long as the format and material is appropriately chosen.


In 2011, this concept would be viewed as a joke by most folks. However, during the discussions about the fiscal cliff, the idea began to be treated seriously by many folks including Paul Krugman and Bill Gross (who modestly wants 100 coins per $10 billion only because a pizza divided to 100 pieces is too much to eat, as his blonde friends agree). The number of articles dedicated to this plan is huge and most of the writers endorse the plan. A Twitter hashtag about the coin is full of activity. More seriously, the White House hasn't ruled the idea out.

I think all of them are plain lunatics – except for Paul Krugman who is an imbecile.

The ceiling is a plane that separates the interior of a room from the exterior. At the top floor, it's followed by a roof which protects the room against precipitation and other things. ;-) It plays a rather important role. You may kiss it – like the lady above – but you shouldn't jump higher than the altitude of the ceiling if you don't want to break your stupid skull.

Similarly, the debt ceiling is what separates a somewhat safe economy from Hell. The raising of the debt ceiling has become a tradition, a regular event whose realization is a sort of formality. However, it's still a hard formality. The friction that makes this formality difficult is what assures many people that the fiscal situation of the U.S. isn't completely out of control.

The trillion-dollar coin is a sort of a drill that can make holes into the ceiling. Minting such a thing would surely be a precedent that would make it easier, and not harder, to spiral the expenses of the federal government out of control. I am sure that many lunatics and imbeciles mentioned above want nothing else than this development. But sensible Americans should think twice.

It's simply an unfortunate fact that it's more politically convenient for governments to overspend. Politicians are buying their political capital in the eyes of the current generations for the future generations' money. The debt ceiling is one of the last powers that at least regulates this insatiable desire of politicians to spend. The precedent making it possible to mint infinite-value coins means that the laws behind the debt ceiling will become irrelevant.

I can't imagine that the buyers of the U.S. treasuries would remain eternally unaware of the fact that the debt that may be borrowed by a U.S. government whose hunger isn't even regulated by any debt ceiling can never be repaid. They may hesitate for a year or two or three but they will ultimate get the point and it won't be nice. They will realize that their fellow treasury holders will realize that it's an unsustainable scheme. Therefore, they will realize that the demanded interest rates will have to skyrocket at some point, the U.S. economy will tank, and inflation will explode.

The U.S. is turning into a pupil learning from Greece – trying to be another Greece when it gets mature. All the recent hysteria about the absurd notion of a fiscal cliff shows that the U.S. politicians are not only unable to lower the debt. They're even unable to lower the rate by which the debt is increasing. They're unable to do so even if laws are telling them that they have to do so. They always prefer to change the law. In the case of the fiscal cliff, they changed the law, too. And it was before a trillion-dollar coin.

It's the "moral atmosphere" that most accurately determines what the fiscal situation of a country may look like in the medium run or the long run. And when one looks at America today, it ain't pretty. I am not making any precise prediction of the doom but I am almost certain that America is destined to financially collapse in a foreseeable future.

Wise lawmakers should try to close similar loopholes. In Czechia, someone found a less important but still interesting loophole: CDs divided to one-crown individual "tiny CDs" didn't have to pay taxes from the interest. Make no doubts about it, at some point, almost everyone was dividing their CDs and effectively saving accounts into these five-cents "securities" and the drop of the tax revenue became substantial.

All such loopholes, when they exist, were designed with the purpose of eliminating some bureaucratic hassle, the need to file tax returns because of every penny, and soon. But whenever there exists a method to enhance this "tolerance of details" into huge proportions, the law should be clarified in such a way that it's impossible to abuse the magnanimity that was supposed to apply only to small things.

In reality, I guess that the coin is unlikely to be printed. But fiscally irresponsible left-wingers and other economic crackpots will use the possibility as a way to blackmail all sensible people in the U.S. Congress and elsewhere. They may mint it, after all. Jay Carney of the White House is already doing so, in a way. It seems to me that these left-wing hacks will make the political atmosphere in Washington D.C. even more toxic than what they have achieved so far. Needless to say, if the blackmailing "we can mint the coin if you don't obey" becomes effective and the loophole won't be closed, the debt ceiling will be made irrelevant just like if the coin were actually minted. So the loophole should better be filled.
Luboš Motl v 2:16 PM
Share