By Petr Štěpánek (original in Czech)

The prince has a more impressive (pink Mohawk) haircut than Sid Vicious of Sex Pistols. Nevertheless, the illustration is meant to resemble him.

Karel Schwarzenberg has always looked like a likable figure to me. I am intrigued by his life story. Forced emigration after the year 1948 [the rise of communism in Czechoslovakia], political asylum given to him by a Zurich family boiling down to centuries-old contracts and the Swiss citizenship that followed from that asylum, complicated personal relationships with his "double" wife [he divorced and remarried her], overcoming of various human "traps" that were placed in their way by their fate, selfless help to the Czechoslovak dissent before the fall of communism, his aid to exotic Warholian characters such as Ivan Moron ["Magor"] Jirous before November 1989 as well as touching tales such as his ability to infallibly find Winnetou in the Schwarzenberg Library. ;-)


I am personally not repelled by the Austrian origin of his wife, by her inability to speak Czech, or by the past of any of his relatives. Children aren't responsible for the acts of their parents. Also, I have no doubts that Karel Schwarzenberg is a charming, graceful, and elegant man. I am not insulted by his occasionally earthy vocabulary, quite on the contrary.

However, I am far less intrigued by Schwarzenberg's political career. First, he was a senator in the colors of ODA, the Civic Democratic Alliance, and US, the Union of Freedom, two political trains sent to dead ends that haven't brought anything good for the Czech Republic or its political Right. After these episodes, he changed his colors to become a minister representing a left-wing, we could say extremist, party, the Green Party. At the end, he was morphed into a mascot of the political ambitions of Miroslav Kalousek [the current finance minister and vice-chairman of TOP 09 and previously the Christian Democratic Party where Schwarzenberg was accompanying him, too]. Also, the founding of this TOP 09 political party is connected with a foul trick. According to the original agreements, TOP 09 was supposed to be a partner of ODS on the right side of the spectrum. Instead, it instantly began to cannibalize the ODS' electorate. It was a self-evident stab in the back of Mirek Topolánek [an ODS prime minister a few years ago] who, almost by himself, restarted the political careers of both men, Schwarzenberg and Kalousek, something they could and should have been grateful for. These are not my speculations: I know these stories directly from Topolánek. But the greatest problem with Schwarzenberg in my eyes is that he belongs to the category of Euro-eager politicians who don't hesitate to sacrifice our centuries-long national history to the altar in Brussels.

And there's another, third Karel Schwarzenberg. Schwarzenberg as a product of the media and a tool of the presidential campaign. The media rather than the people would be those who elect the new president in the case of a direct election, many people [including President Klaus] had been warning. And the current reality generously provides these people's worries with evidence. What is happening around us in recent weeks is such a brutal manipulation by the media, something we could call the Schwarzenbergian carpet bombing and brainwashing, that it seems to be too much even for our shouting media conditions. The notorious media-cultural front/complex has restarted all of its possible and impossible levers. Behind the backs of Karel Schwarzenberg, we see the reemergence of all the tragic characters we have known from happenings such as Impuls 99, Thank You But Leave, or the 2000-2001 TV crisis.

It's a strange sort of people. Those people have the best possible opinion about themselves: they consider themselves the elite of the nation. Why not, they have often been achievers in their own fields. And as long as we are democrats, we shouldn't criticize them for their publicly declared opinions, either. However, something else is going on here, too. In order to achieve their goals, they don't hesitate to use any means. No stab in the back, malicious defamation, or foul trick is too ugly for them to avoid it in the name of "higher goals". I know exactly what I am talking about. The methods of this self-confident community are known to me from my own experience. They love to talk about the truth and love but their working method is often the lies and hatred.

A manipulated sheep, especially the young one, obviously doesn't have the slightest clue that it's being manipulated. It will bloodily argue with you that it's articulating its own opinions. However, if and when at least traces of cerebral grey matter may be found in its skull, it could perhaps ask the question how it's possible that someone who was an outsider in the presidential elections just a few weeks ago, the chairman of a quickly dwindling political party in the polls, and the vice-chairman of the most unpopular government in the modern Czech history managed to jump to/near the top of the peloton of candidates. Sure, we may still believe that all of it boils down to the aforementioned personal charm or the so far "excellent" political career of this candidate.

The fact that the leadership of ODS, the center-right Civic Democratic Party, led by Petr Nečas has backed Karel Schwarzenberg as the preferred candidate – by giving him a bianco cheque for the second round – is a fatal political and political scientific blunder. Who is voting for Karel Schwarzenberg, will receive a whole package that also contains [left-wing priest] Halík, [fanatically PC political scientist] Pehe, Mr Rychlík [Břetislav, a bitter film director], and other notorious truth-and-love (read as lie-and-hatred) petitioners. The Czech political life doesn't take place just on the left-right axis but in a non-standard triangle. Klaus and Zeman have understood this fact for quite some time.

We shouldn't overlook the fact that a significant part of the ODS' electors have a different opinion than the chairman of the party. We may therefore ask how much time these voters will give to Petr Nečas to continue to harm their favorite party.


LM: There has been lots of escalation in the presidential campaign, indeed. Primarily the third political wing of the triangle described by Petr Štěpánek above, the fanatical supporters of political correctness, has blackmailed various people who supported Zeman.

For example, the well-known actor Martin Dejdar, a Klaus guy just like myself who was decided to pick Zeman just like me, was told he could never collaborate with two upset film directors/producers/screenplay writers or whatever these old chaps have been (by them) because his support for a guy who doesn't try to repel his communist supporters (what a shock for a self-described left-wing politician) disagrees with Dejdar's role of a pilot in a TV serial. They were forced to apologize.

President Klaus who is troubled by the non-Czech background of Schwarzenberg etc. sent a text message to his friend who just declared he was a Schwarzenberg voter. Klaus stated that in the case of the Schwarzenberg victory, Klaus is thinking about emigration. (He will become a Cato Institute fellow since March.)

I went to a forum, one at lidovky.cz, and saw all the disgusting comments enthusiastically celebrating that Klaus will emigrate – something that the author of the article wrote himself and wanted to support among the commenters. My comment that the nation should be deeply concerned about the possibility that a founder of our modern democratic state and the main father of its trade economy may have to escape after his smooth 10-year-long tenure – and that such a change of the atmosphere would be analogous to what happened in 1938 and 1939 when Nazism was overtaking the Czech lands – was immediately censored (perhaps also because my Facebook account automatically says "an author of the top comments"). Mindless and dishonest attacks by the brainwashed sheep against the head of the country are being encouraged by these folks; everyone who disagrees with them is being repressed. Be sure that I start to be concerned.

Add various assorted accusations about links of the candidates to criminals, corruption, and so on. It's kind of dirty. Needless to say, I am confident that all these links are insanely indirect and I don't pay any attention to this dirt. This last-day propaganda is not the kind of reasons that may determine a knowledgeable voter's decision how to vote, I think.

The voting in the first direct Czech presidential elections ended 150 minutes ago but because 99% of voting districts have already been counted, it's clear who will continue to the second round in two weeks. 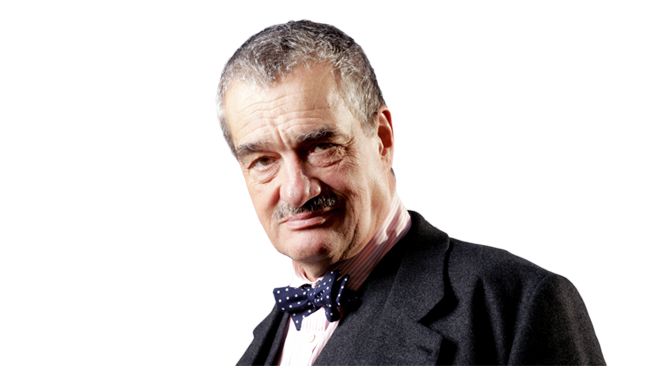 Jan Fischer, a statistician, a former technocratic prime minister, and a genuine former communist from the 1980s, who has been the #1 candidate in the polls for quite some time and as recently as one week ago, dropped (16.5% now) and will be third (or fourth), followed (or beaten) by the official socialist candidate Dienstbier (now 16.2%). So Czechia won't become the second country in the world with a Jewish elected president (Fischer).

Instead, in two weeks from now, Czechs will decide among the sleeping aristocrat Schwarzenberg and our current foreign minister on one side (23.2% now, second place); and the tough-talking, chain-smoking former communist Zeman, a former prime minister, on the other side (24.3% now, first place). I will vote for the latter once again (the label "former communist" is truly misleading if you understand the timing) but I have no idea who will win.

The TRF poll was won by Schwarzenberg ahead of a pair, Bobošíková and Zeman. Bobošíková would be the winner if I formally ended the referendum earlier. However, the vote got contaminated by some Czech TRF-non-readers. ;-)

In the real world, Schwarzenberg won in the large enough cities including Pilsen (proper). The fifth candidate was Franz the Avatar, 6.8%. He was followed by Zuzana Roithová, 5.0%, Taťana Fischerová, 3.2%, and at the last two places, the official right-wing party candidate, Přemysl Sobotka with 2.5% each and Jana Bobošíková with 2.4%. Nothing about the rankings will change when all the districts are counted.

The turnout was about 61%, higher than in many other elections but lower than what it seemed like yesterday when the voting was really intense.

So in two weeks, Czechs will be deciding between two sides of their character: between the earthiness of the cottage in the Vysočina Hills and the nobleness of a Viennese palace; between work trousers and a tuxedo; between hugging the trees and hugging the ladies; between Becherovka the herbal beverage and champagne. (These funny comparisons are by Czech journalist Martin Komárek).

Let me mention that even though Jan Fischer, a Jew, was eliminated, both remaining candidates are strongly pro-Israel and against the enemies of Israel, to put it mildly. Zeman supports the bombing of Iran and Israel in NATO that fights against the Anticivilization. Schwarzenberg has been called the Zionist prince. Maybe I should also mention the coat of arms of their house since 1599 (when Adolf Schwarzenberg defeated a certain Eurasian nation): 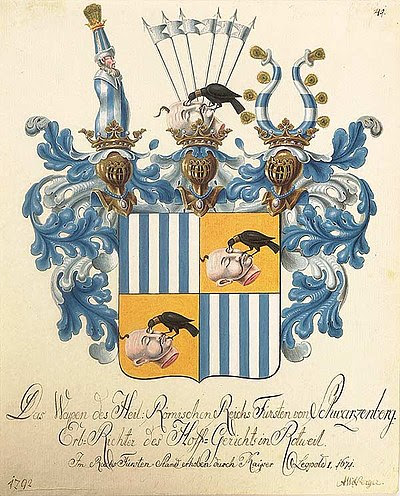 Look what the bird is doing to the wonderful Turk or whatever he is. Thrice so that you don't think it's a typo. I forgot whether Schwarzenberg supports the Turkish membership in the EU. :-))

The referendum about the Corso mall in Pilsen will almost certainly be valid, with way more than 35% of the electorate telling their opinion, but we still officially don't know what the results actually are. However, I have checked the electronic boards of neighborhoods of the city such as Pilsen 4 (mine) and it's clear that the opponents of the construction, "YES", got about 2/3 of the votes and they will safely win the referendum. A big bummer expects us here.