...and they may be pretty exciting...

The BBC and The Globe And Mail (via Gordon) bring us some details about the looming dark matter announcements. 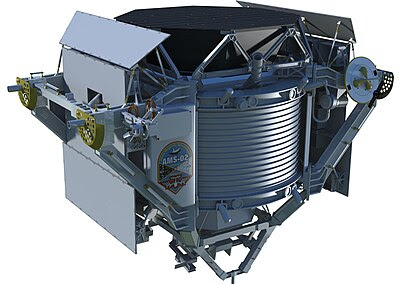 In particular, the Alpha Magnetic Spectrometer, a $1.5 billion gadget operating from the International Space Station, should reveal their first results in two or three weeks or so, i.e. probably in early March. And I would say that Samuel Ting, a 1976 Physics Nobel Prize winner and the boss of AMS, is trying to increase our suspicion that the AMS-02 results could be damn interesting although he remained able to leak no detail whatsoever, too.


Note that since 2011, they have registered 25 billion cosmic ray particles. About a third, 7.7 billion, are electrons and positrons.

These observations may turn out to be a de facto discovery of the dark matter particle – whose mass (if it is WIMP) is theoretically expected to be between 30 and 1,000 GeV; AMS is looking for electron-positron traces assuming that the mass is between 0.5 and 350 GeV. The dark matter interpretation of the electron-positron observations mostly depend on the positron/electron ratio as a function of energy.


These particles are likely to be contributed by dark matter if the ratio gradually increases and then abruptly falls. Also, these positrons should better come from pretty much all the direction in the sky to avoid the possibilities that they come from localized astrophysical sources.

In effect, the announcement we're waiting for may turn out to be a much more convincing, hard money-backed confirmation of some results by PAMELA. This experiment's tantalizing 2008 observations of the positrons have invited dozens of imaginative fantasies about the new particles whose pair annihilation produces these electron-positron pairs.

We may already be stealing lots of dark matter particles (neutralinos from supersymmetry?) from outer space. An astronaut attempted to partially repay the debt and bring some neutralinos back to the Cosmos – one was made of plush.

The fascinating possibility is that the new hypothetical particles – if they exist at all – could be observed by three entirely different methods almost simultaneously: by seeing their annihilation through AMS-02; by directly detecting them in the direct search experiments under the ground; and by producing them at the LHC. It would be almost like an instant proof of God by seeing the Father, Son, and Holy Ghost in the same year. ;-)

Bonus: I often declare that all the physically meaningful major insights about the foundations of quantum mechanics were already known back in 1925. However, I didn't know that in 1925, they already knew SUSY like I know SUSY :-) if not more so – and they felt more certain than later in 1945 or in 1967 (+)! Or at least a temporally local heterosis of Georg Cantor and Edward Witten knew it. They even knew that SUSY had a perfect reputation and nobody knows where SUSY goes. She spends Sundays praising the Lord but on Monday, she's so busy with some porn. Wow, what a girl. (Via M.R. Francis; lyrics.)
Luboš Motl v 10:48 AM
Share