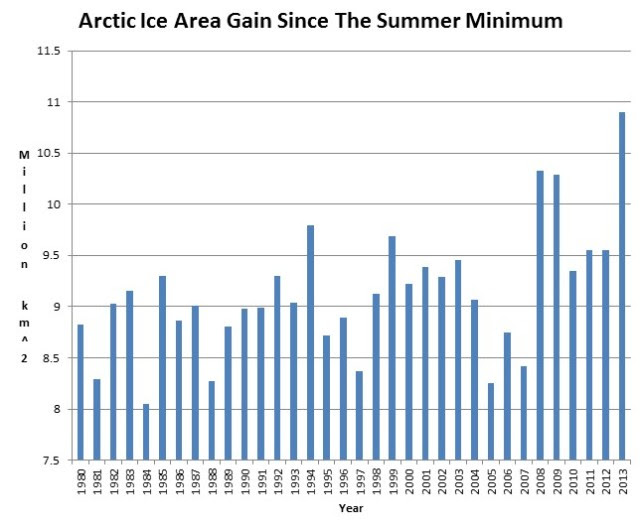 They pointed out, without too much ado, the innocent fact that since the beginning of the observations in 1979, the year 2013 has seen the greatest increase of the Arctic sea ice area relatively to the previous year's summer minimum.

That drove Tamino up the wall! Some people – deniers – can't be reasoned with, we learn.


I find this exchange amusing. It's very clear that pride of Tamino's God – the omnipresent, omniscient, omnipotent global warming – has been hurt. It's been hurt by the facts. Facts should only be allowed to support global warming's greatness.

At the same moment, I am equally and utterly unimpressed by the fact that the ICE(February 2013)-ICE(September 2012) happens to be the largest difference between the sea ice areas calculated over similar 5-month intervals, the largest number among 34 similar numbers. Well, if there are just 34 contestants, it's not impossible for the most recent year to win, especially because there are much more than 34 similar but inequivalent contests in which the years may compete!

However, this particular contest is totally analogous to tons of anecdotal observations we hear from the alarmists on a daily basis. It only differs in one aspect: its message has the opposite sign than the equally irrelevant alarmists' anecdotes. And that's what makes Tamino so angry.

We may surely agree with Tamino that the greatness of the ICE(February 2013)-ICE(September 2012) difference may be interpreted as the relative largeness of the former term, or the relative smallness of the latter term that we subtract. It's easier to record a larger increase if we're starting from a lower starting point. And indeed, the Arctic sea ice area in Summer 2012 was among the lowest ones on record.

Those of us who think about matters rationally know that these are completely equivalent propositions. And I am convinced that the number of rational people of this kind is actually high. However, unfortunately, much of the "global warming debate" is about the attachment of irrational spin and emotions to such propositions. If the same proposition about a temperature difference (or difference of sea ice areas) may be said in two different ways, certain people just choose the way that sounds "better for their cause".

Needless to say, both "camps" are sometimes guilty. The only difference is that the alarmists are doing these things much more frequently than the skeptics because they're the "attacking side" in this conflict of ideas and this kind of spin is their main weapon. Skeptics sometimes like to expose these interesting anecdotes and somewhat cherry-picked data but they're primarily the side that has teamed up with rational reasoning or at least common sense – so if someone tries to remind everyone what the impartial, cold reasoning about all these matters is, it's the skeptics.

Some temperature or ice differences are positive, some of them are negative, some of them are greater or smaller than other temperature or ice differences, there are lots of data. But what is important is that there's no evidence that something "stunning" is going on. There has clearly been some quasi-periodic behavior as well as noise in the Arctic sea ice evolution over the recent million of years and what we've observed in the recent 34 years is quite certainly "rather representative" of the behavior that has existed for a much longer time.

In fact, if you look at the Cryosphere Today and if you find the sea ice anomalies, you will notice that the current global sea ice anomaly is almost exactly zero. The Arctic sea ice is –0.694 million square kilometers below the normal while the Antarctic sea ice is +0.676 million square kilometers above the normal. Up to the sign, these numbers are pretty much equal so the total global sea ice anomaly is close to zero. A week ago or so, it was positive.

This fact itself is a proof that the "loss of ice" isn't spectacular in any sense. Imagine that the area of the global sea ice is the price of your stocks in your portfolio or a Dow Jones-like industrial index. People talk about a horrible depression and an unprecedented low value of the investments. Except that on one day, in the beginning of February 2013, the value of your portfolio or the value of the industrial index is at (or above) the normal. This shows that the depression can't be this huge, doesn't it? Incidentally, Dow Jones is now just 1% below the historical record high value 14,198.10 (from October 11th, 2007).

If someone were building his political and intellectual capital on the decreasing ice – much like those who are shorting the stocks – his profit/wealth or his political capital would be near zero right now once again. He shouldn't behave as a trillionaire who has made some remarkable profits based on some assumptions. If he has ever been rich, he's no longer rich now. Tamino has shorted the ice and he was very rich in September 2012 when the sea ice area was rather low. That's a bummer because he has lost the money between September 2012 and February 2013 when the ice was advancing faster than it usually is. That's unfortunate, Tamino: you no longer have the "capital." You could have made a profit if you left the "sea ice is falling" bandwagon in September 2012 and if you have joined those who say that the hype is preposterous and the global warming fears are a giant bubble. But you failed to do so, Tamino, so you're broke again.

Even if the Arctic or global sea ice area remained below the normal for many years without an interruption, it would still fail to imply that there is something spectacular going on. It just means that there has been change at a decadal (or centennial) time scale. This change could have had many causes and it could have been more or less similar to other decadal (or centennial) changes in the past (and in the future). Whatever the causes are, a change isn't equal to a catastrophe. Almost everything – except for exactly conserved quantities - in the world is constantly changing. It's more or less guaranteed that the difference between the sea ice areas e.g. in the 1990s and the 1980s had to be nonzero. It has some sign – both signs are a priori equally "serious" – and some magnitude – the most straightforward way to acquire a reasonable expectation about the natural magnitude of these fluctuations is to look at the measured data.

Most of the differences we may observe – when the typical time scale of the comparison is at least a decade or so – end up being correlated with a "warming". Yes, the "warming signs" represent more than 50% of similar anecdotes. But there is nothing stunning about this fact because there's no reason to expect that the ratio of the "signs of temperature change" would be exactly 50-50. Almost nothing in Nature is exactly 50-50 because Nature abhors quota and affirmative action. It's just not Her style. But the fact that the composition of similar anecdotes isn't exactly balanced doesn't imply a catastrophe: it only reminds us that Nature is natural and that there's a trend/asymmetry/dynamics at the centennial scale much like there's a trend/asymmetry/dynamics at any other scale.

Steven Goddard, Anthony Watts, and others (I have surely been a member of this set many times) are just pointing out that if one wanted to cherry-pick anti-global-warming anecdotal evidence, he would succeed almost as often as those who try to cherry-pick pro-global-warming evidence. It's wrong to cherry-pick facts, whatever their sign is, but the skeptics are really mostly spoofing the alarmists. They are showing how silly the alarmists are. And this is what makes alarmists such as Tamino so angry. They don't want any satire about global warming. They only want one kind of facts to be cherry-picked – and all other facts of the same kind but opposite sign must be treated as blasphemies. They're religious fundamentalists.

That's the primary problem behind the climate change debate. Exchanges about a year-on-year change of the sea ice and its "right interpretation" are just irrelevant masks that the global warmists' fundamentalism sometimes takes. If there weren't numbers about the sea ice, they would find some other quantities and their numerical values which would have some sign and some magnitude. None of these things really affects the "big picture". The big picture of the alarmists is that we should be afraid and we should never be allowed to say things and quote facts that make the "big threat" look smaller. They have already learned to treat the facts in this dishonest, selective way and they want everyone else to follow them.

Sorry, I won't. It's spectacularly clear that if one looks at all these numbers in the proper context, in comparison with the estimated changes that used to occur naturally, and if one compares the possible effects of these changes with effects of completely different changes that are occurring in this world, he or she will have to see that there is absolutely no reason to be concerned about anything we observe as a part of "climate change". And this very innocent conclusion is the ultimate heresy from the alarmists' viewpoint.
Luboš Motl v 10:57 AM
Share