Do you know which number would be the next one?

Six weeks ago, Sam Ting claimed that not too uninteresting results from the Alpha Magnetic Spectrometer would arrive in two or three weeks. 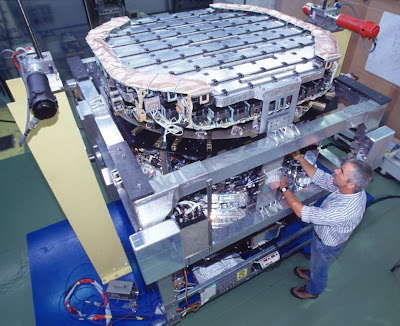 It didn't quite work; it's plausible that they were waiting for reviewers to say OK, something they may have expected to be just a painless or painful formality back in February. Now we're told that it's at least 6.5 weeks but this timing should work. Why?


As tweeted by various antimatter tweeters and Twitters, there will be a talk at CERN on Wednesday, April 3rd.


The speaker is Samuel Ting (MIT) and the title is simple:


Recent results from the AMS experiment


The one-hour talk begins at 17:00 Pilsner Summer Time (which starts tomorrow) which should be 11:00 Boston Daylight Saving Time and it will be webcast by CERN. What the talk will say remains to be seen but it could be lots of fun (or less fun).

Just if you missed it, this powerful apparatus carried by the International Space Station could have easily discovered the dark matter particle or it could have undiscovered it or it could have done something entirely different, too. ;-)
Luboš Motl v 5:14 PM
Share