The Science Magazine's news arm has noticed an interesting preprint by two physicists,


They use topological and numerical methods to find three classes with 13 new types of periodic orbits in the 3-body problem.


The two-body problem in Newton's gravity happens to be fully solvable. You may prove that the elliptical orbits with the right parameters and the center-of-mass in one of the foci exactly solves Newton's equations of motion. Kepler's laws – that were guessed before Newton found his theory – exactly describe some of the solutions.


The equation for the ellipse (in space) may be written down explicitly, in terms of elementary functions. However, in the precise parameterization we want, \(x(t),y(t),z(t)\), it's somewhat more subtle. Nevertheless, we count the two-body problems among the analytically solvable ones.

For the 3-body problem, there are still 10 integrals of motion but the dimension of the phase space jumps to 18 which is way too much. There's no way to write down the general solution. In general, the behavior of the system exhibits some chaotic behavior etc. Henri Poincaré proposed that in such a messy situation, one should focus on the periodic solutions as our fifth column that helps us to penetrate into the chaotic enemy's party.


“... what makes these (periodic) solutions so precious to us, is that they are, so to say, the only opening through which we can try to penetrate in a place which, up to now, was supposed to be inaccessible”.


Interestingly enough, these periodic solutions only began to be mass-produced in recent 40 years. The two Serbs added quite a collection of drilled holes among these "openings". Here's a figure from their paper that does a good job in showing the complicated topology of some of the solutions: 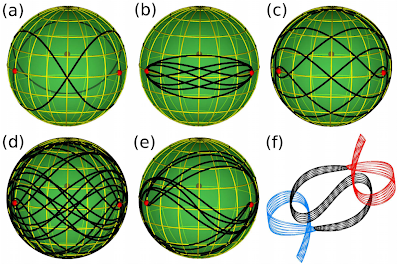 See also the 3-body gallery in Serbia. The spheres are "shape spheres" that encode the relative distances between the 3 bodies in a certain way.

Because of the 3-body problem and the fact that its situation is generic, I never understood the amazement – e.g. by folks like Stephen Wolfram – that simple rules may lead to solutions we can't write down analytically. In fact, it's almost always the case that there's no way to write down an explicit solution to a problem such as a complicated enough differential equation or their set. The situation of the 3-body problem is a rule, not an exception.

On the contrary, I believe that what is precious for a physicist is to find some way to understand some problems despite the fact that their vast majority is not "integrable" – solutions can't be written in an easy form. When physicists do so, they usually depend on the subset they understand more than the bulk – either problems that are fully "integrable" or problems whose properties of a certain kind (e.g. the topological ones) can be determined exactly. All the other problems and solutions are phrased as variations or perturbations of the "more integrable" ones.

You will need to read the paper if you want to know any details. It's clearly written. I would be sort of surprised if these exotic shapes in the figure-eight [shape] family and other families were spotted by observational astronomers but that doesn't mean that there aren't arguments in favor of their existence. When you have 3 bodies, the proximity of their orbit to a periodic one (in time) is a good explanation why no pair among the 3 bodies has collided yet (after millions or billions of years). This "survival explanation" is actually the only one I am able to think about that would explain why the periodic orbits could be "attractors" in the real world. Well, we don't know too many real-world 3-body systems with comparable masses, anyway, so these questions might be a bit academic.
Luboš Motl v 8:39 AM
Share