Alessandro Giuseppe Antonio Anastasio Volta was born to a somewhat poor family in Como, Duchy of Milan, in 1745. He died aged 82 on March 5th, 1827, i.e. 186 years ago, in the same city that already belonged to Lombardy-Venetia.

Before he reached the age of 30, he became a physics professor in Como. A year later, he popularized electrophorus ("electricity bearer" from Greek: capacitive generator producing electrostatic charge by electrostatic induction) due to Swede Johan Carl Wilcke so intensely that we often attribute its discovery to Volta himself.


A few years later, in the late 1770s, Volta focused on chemistry. He read some texts by Benjamin Franklin about "flammable gases" before he became the first person who isolated methane from his own, rich fart. (OK, he found the methane at Lake Maggiore but it sounds too boring, doesn't it?)


But we (and Chevrolet) use various modifications of Volta's name to describe voltage (!) and its unit, a volt (not to speak about the uneconomic car). Well, Volta wasn't the first guy who did cool experiments with frogs. The first person was Luigi Galvani who was about 8 years older than Volta. Galvani did something like this:

Feel free to explain why it works!

Well, let me mention that it was during a funny experiment with static electricity that he obtained by rubbing the skin of a frog. I can't get rid of the feeling that Galvani was extremely lucky: he just happened to choose the same animal to create static electricity (from the skin) as the animal that just happens to hide an interesting new effect in its muscles.

The rest is history. Some sparks went to the legs of a poor dead frog and the legs twitched as if the frog (that was previously cut into pieces) were resuscitated again. Yes, I think that old Galvani was both lucky and somewhat intellectually limited. So a respectful but intense intellectual debate began between Galvani and Volta – the latter reproduced Galvani's experiments and quickly became a greater expert.

Galvani argued – almost vitalistically – that there was a totally new type of electricity connected with organisms. Volta understood that the metals were important for the experiment to go and it had to be the same electricity that is found in inanimate objects. Finally, Volta realized that there was something in between two sides of a cell – well, I mean the voltage – and one could combine several carriers of this voltage to increase it.

In 1800, Volta finally invented the voltaic pile, a primordial battery. These advances look remarkable but given the fact that he had two decades to play with similar phenomena, it doesn't look too shocking, after all. 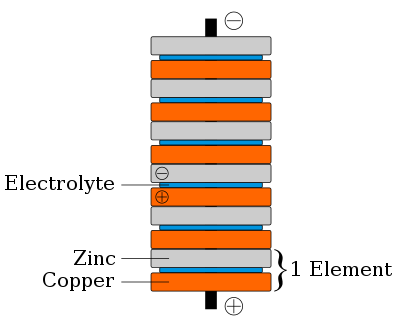 The zinc and copper disks are separated by a cardboard soaked in salted water – an electrolyte. One may say that it was quite ingenious to combine the two metals. A beginner could ask: Why should there be any asymmetry here at all? However, one must realize that Volta made many insights by pure experiments, without much thinking, and he happened to believe lots of superstitions about things he hadn't tried. For example, for years, he believed it was necessary for the voltaic pile to terminate by individual, single copper/zinc disks on both sides, immediately followed by the cardboard.

Why does the battery work? Well, the modern explanation is atomic. The zinc atoms have two losely bound (valence) electrons in \(4s^2\) and these electrons may be separated ("oxidation") and sent to the electrolyte where they freely move towards the other electrode while the zinc becomes a bit "positively charged":\[

\] On the opposite side, as you see in the second reaction, copper (whose electron configuration is almost like zinc's, but only with one electron in the final shell), the omnipresent hydrogen ions combine with the electrons ("reduction") and hydrogen gas is released. You generate 0.76 volts per zinc-copper pairs. It may be confusing why it works but the summary is that zinc atoms are better in expelling two electrons, so it's easier for them to become more positive ions than for copper. When this "relative charge" is being formed, a current flows through the electrolyte and by the charge conservation, it must flow through the remaining circuit, too.

Two hundred years ago, it was a great era of experimenters. I think that many of these advances were literally discovered by adult boys who play with funny devices where electricity (and/or magnetism) does some funny things. After the delay of a few decades, the full theoretical understanding of the experiments was emerging.

After all, I have some understanding for Galvani's vitalism, too. When I was 8 or so and I was playing with radios and antennas, I noticed that it was useful to touch the antenna cable if I wanted to improve the signal. I am not even sure whether I understand the reason properly today, please feel more than free to explain the reason to me. ;-) At any rate, I tried to connect the antenna cable to a big flowerpot and many other things that looked similar to me but it failed. For quite some time, I was tempted to think that animals like myself had to contain some special substance or ability that allows the radios and TVs to improve the signal. When (misleading) experiments invite you to accept some (ultimately wrong) conceptual idea, it's often easy to surrender and overgeneralize, especially if and when you repeat the same experiment many times. That's why it's very important for a physicist to be able not to pay attention to experiments – well, I mean misinterpreted and overinterpreted experiments, but these adjectives are often unclear to the experiments' blinded champions.

Volta remained a loyal Catholic throughout his life.

I want to mention one thing. In 1801, Napoleon Bonaparte promoted Volta to a count – yes, it's more than a viscount (=vice-count), with apologies to Lord Monckton. An even better thing was that Volta appeared on the 10,000 lira banknote.

Volta has spent quite some time on the bill. At some moments, I am still amazed how easily the European countries including Italy abandoned their symbols and a part of their culture in favor of the faceless Euro banknotes and a mindless unification utopia in a region that is very far from an optimum currency area.
Luboš Motl v 1:19 PM
Share