Americans see the Higgs boson, too

Two years ago, I was a staunch defender of the retirement of the Tevatron, the collider near Chicago, Illinois. The reason was that it just wasn't competitive anymore. The lower energy and amount of collisions relatively to the LHC translated to a much smaller probability of a legitimate discovery per unit time – which also means a much lower expected number of discoveries per dollar. 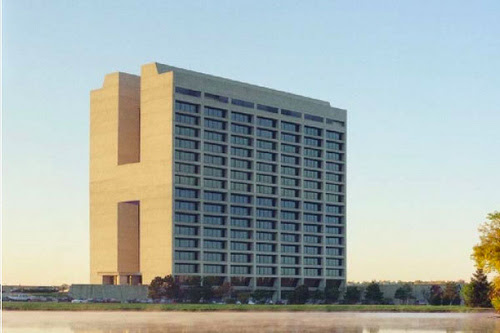 The actual shape of the Wilson Hall differs from the fictitious Hilson/Higgson Hall above.

I think that people gradually understood that people like me were right and it was pointless to keep on running the Tevatron and these days, everyone agrees. For the properties of the \(125\GeV\) Higgs boson, the Tevatron was said to be "roughly competitive" with the LHC. Below, we will see it's not quite the case: it was weaker, too.

But when it comes to the phenomena at the energy frontier that the LHC is probing these days – and still confirming the Standard Model as of today – one may estimate that one day of the data from the Tevatron would provide us with less information than one second of the data from the LHC. The ratio of the strengths of signals approaches a million or so, mostly because the lower energy at the Tevatron just couldn't get there. Running the Tevatron along with the LHC is pointless.


The Tevatron was shut down in September 2011, after 25 years. Now, almost 18 months later, the major detector collaborations at the Tevatron, CDF and D∅, finally teamed up and evaluated all of their data about the possible Higgs boson near the mass interval we know to be relevant:


They couldn't discover the \(125\GeV\) Higgs boson at the required 5-sigma confidence level but they see "strong evidence", so to say, with the local significance of 3.1 sigma. When the look-elsewhere effect is incorporated, the significance would drop below 3 sigma.


They looked at the decays in the following channels:\[

\] and concluded that everything they see is consistent with the Standard Model Higgs at \(m=125\GeV\).

I can't resist to point out that it's not just the brute force of the collider. Even the physicists seem to be slower. The LHC Collaborations are already flooding the market with lots of papers using almost all the 2012 collisions – which were accumulated up to November 2012 or so. It may take five months.

Eighteen months that the Tevatron folks needed just seems too much, especially when they already know what result they're likely to get. I don't suggest that they should adjust their data to the expectation based on the LHC's work; but I do think that the amount of verification and cross-checks may be a bit less extensive because the \(125\GeV\) Higgs boson claim is no longer an extraordinary hypothesis.

On the other hand, I do appreciate that the Tevatron Higgs work could have been slower also because of the lack of motivation i.e. because it was no longer a priority – the Higgs boson had already been discovered by someone else. Still, I don't like many other things about the paper – it doesn't show any graph that would make the significance 3.1 sigma for the right Higgs mass manifest and that would allow us to estimate how precisely their observation of the mass is (from the width of the bump).

At any rate, congratulations to the Fermilab and good riddance, too.

Twenty years ago, people would still write assorted papers dreaming about another powerful American collider, the SSC. The titles would usually mention the center-of-mass energy \(\sqrt{s}=40\TeV\). Two decades later, we had to get more modest by a factor of five but thank God at least for what we have!