I am carefully following all the new preprints by ATLAS and CMS that are currently being presented at the Moriond 2013 conference so that you don't have to. So far, everything is compatible with the Standard Model including the \(126\GeV\) Higgs boson and the latter beast is still behaving as obediently as the Standard Model assumes. If something changes about these statements, you will probably learn about it on this blog almost instantly.

However, there's an interesting 3-sigma anomaly in an otherwise obscure search so let me tell you what it is.


It appears in the following preprint:


It is a relatively obscure search for an electroweak triplet of new fermions, \(N^\pm,N^0\), that are used in the so-called type III seesaw models. Note that all seesaw models are meant to produce the neutrino masses (equal to zero in the "truly minimal" Standard Model) – and explain why they're so small.


As you may expect, the ATLAS folks exclude the existence of these new fermions \(N^\pm,N^0\) up to some mass, namely \(245\GeV\). But there's an interesting 3-sigma excess near the (higher) mass \(m_N\sim 420\GeV\): its \(p\)-value (probability of a similarly strong signal according to the null hypothesis) is about \(p_0=0.20\), a statement whose origin I don't quite understand. I would understand \(0.20\%\) but maybe their figure is right and unimpressive due to some look-elsewhere reduction.

At any rate, the picture (Figure 4) says a clear story of a rather strong excess by itself: 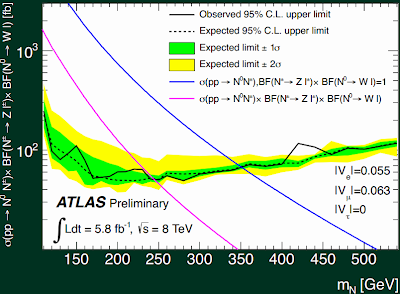 \] In other words, it's some cross section (in the units of one femtobarn) for the production of a pair of the new fermions (one neutral fermion and one charged fermions) using a proton pair but only the "branching fractions" in which these new fermions decay to \(W^\pm/Z^0\) gauge bosons plus leptons in the indicated way (pretty much the dominant decays expected for the new fermions) are included.

The decays of these hypothetical new fermionic triplets violate the lepton flavor if not the lepton number. They can probably achieve what they can achieve – the neutrino masses – but I haven't encountered them anywhere else. In particular, I am not aware of any top-down explanation why these things should exist. But of course, it's not impossible that these otherwise unwanted beasts are employed by Mother Nature.

It's more likely that the excess is a fluke. But even if it is due to new physics, I suspect that the details of the new physics could be a bit different (sleptons and sneutrinos of some kind?). This particular paper has only used \(5.8/{\rm fb}\) of the 2012 data. Over twenty inverse femtobarns have (already) been collected last year so when they're processed, the signals – if they're due to new physics – should grow to indisputable proportions.

TBBT and women in science

Last night, the latest episode of The Big Bang Theory made Leonard want to help young women enter science. Sheldon and Howard ultimately agreed to co-operate. They went to a high school to meet girls and the sitcom showed a very realistic picture of how hopeless disinterest most of the girls of this age have in science and how complete hypocritical waste of time similar attempts to "draft girls" are.

Miloš Zeman was inaugurated as the new Czech president. Lots of fun formalities at the Prague Castle and the cathedral over there. His inauguration speech was given off-hand, rather impressive. Among other things, he declared war against three main enemies of the society – mafia's godfathers, neo-Nazi guerrilla groups, and most of the journalists. ;-) The latter group (Zeman's comment about this group was the only thing that excited an applause among the audience dominated by top politicians) is composed of jealous and stupid individuals who love to criticize people for doing something they can't do at all and who love to brainwash the citizens. Fully agreed.

There were things I disagreed with, too. He rewrote the history when he presented Masaryk as the guy who wanted to eliminated all traces of monarchy and introduced pure republicanism. That's rubbish. Masaryk deliberately preserved some of the royal functions and image of the kings for the Czechoslovak presidents. At any rate, Zeman surrendered his right to declare amnesties and pardons (that's like not doing a part of his job!) and promised to be an intermediary of a political dialogue, not a judge.
Luboš Motl v 10:08 AM
Share